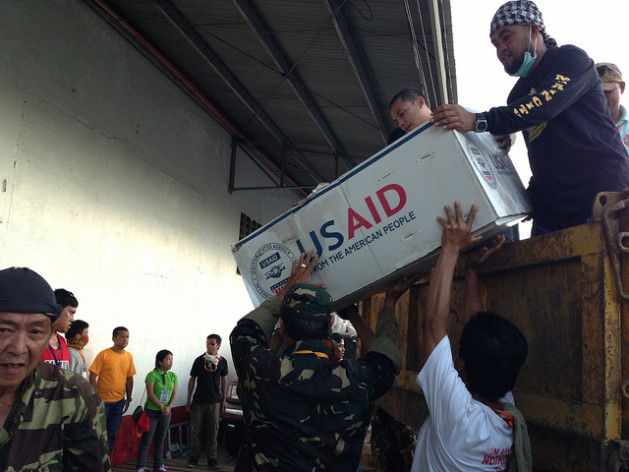 Emergency relief supplies flown into the airport are trucked to a nearby warehouse at Tacloban Task Force Headquarters and sorted on Nov. 17, 2013. Credit: Carol Han, OFDA

WASHINGTON, Nov 18 2013 (IPS) - Even as Washington has mounted a strikingly robust response to the humanitarian crisis in the Philippines, the ongoing effort is highlighting important gaps in the United States’ emergency relief capability – gaps that could start to be addressed through legislative reforms currently under debate in the U.S. Congress.

Shortly after the Nov. 8 landfall of a massive typhoon in the central Philippines, the U.S. government announced that it would be providing an initial 20 million dollars in humanitarian assistance to survivors. A U.S. military aircraft carrier and fleet of supply ships have also moved into the area, offering significant technical capacity for rescuers and humanitarian groups.

“The shipping lobby remains staunchly opposed, and they bear a lot of the responsibility for the failure of the movement on reform.” -- Eric Munoz

According to USAID, the government’s main foreign aid arm, half of that 20 million dollars would go to getting food to communities devastated by Typhoon Haiyan (or Yolanda, as it’s known in the Philippines). Yet while an initial 55 metric tonnes of food was to be immediately flown in from the United States, the bulk of this shipment – an additional 1,020 tonnes of rice – isn’t slated to arrive by boat in the Philippines until the first week of December, according to a USAID factsheet.

That’s despite the fact that this rice had been prepositioned in Sri Lanka, specifically to respond to emergencies of this type in Asia. The lag in delivery is the result of a peculiarity in U.S. law, requiring that foreign food aid be grown primarily in the United States and transported primarily on U.S.-flagged ships.

“What’s happening in the Philippines should be a touchstone for members of Congress and the response that USAID has provided, in thinking about what is necessary in addressing natural disasters,” Eric Munoz, a senior policy advisor with Oxfam America, a humanitarian group, told IPS.

“Congress runs the risk of ignoring the fact that good humanitarian response requires different tools than Congress has wanted to give USAID to run operations. Haiyan demonstrates the tools that USAID and aid groups need to run these operations, and this now needs to be taken care of [legislatively].”

For years, advocates have been pushing for changes that would allow for greater flexibility in responding to humanitarian crises by providing cash – which can be provided almost immediately and used for local procurement of food and other supplies – rather than “in kind” provisions, which have to be physically lugged to crisis zones.

Such changes have been stymied by special interests, however, despite government auditors (including here and here) having repeatedly warned that the process is highly inefficient, impacting most negatively on the communities U.S. aid is trying to help.

USAID officials, too, have recognised the need for greater flexibility. According to a USAID fact sheet released Saturday, U.S. funding is now helping the World Food Programme (WFP) to locally procure an additional 10,000 tonnes of rice.

“Of the 10 million dollars the U.S. has provided [for food aid], more than 75 percent was for local and regional procurement,” Munoz says. “This clearly demonstrates that USAID thinks it sensible that the vast majority of current aid go towards local procurement.”

Indeed, USAID has been able to tap a contingency fund to make much of this cash available. Yet doing so will now make a significant dent in that fund for the rest of the fiscal year, which began only last month.

“Because USAID is using this money now to buy locally, it will have far less money to use in Syria,” Timi Gerson, advocacy director at American Jewish World Service (AJWS), a development group, told IPS.

“A similar dynamic took place when the Syria conflict began and USAID was suddenly forced to choose between using these funds for Syria or the Democratic Republic of the Congo, as you couldn’t physically truck food supplies into either country. Once again, the situation in the Philippines is putting in stark relief why reform of this system is necessary.”

After years of mounting criticism of the U.S. system of food aid delivery, this past spring President Barack Obama proposed a full overhaul.

For decades the U.S. Congress has considered food aid policy and funding under multi-year agricultural legislation known as the farm bill. The president’s proposal would have changed this (among multiple other reforms), forcing Congress to consider food aid instead as a foreign aid issue and thus delinking food aid from domestic agricultural interests.

Although receiving significant bipartisan support, the president’s proposal failed to receive the necessary backing. Nonetheless, important scaled-back changes have lived on in a Senate version of the farm bill, and many are optimistic these will now make it into law. (Differences between the Senate and House versions of the farm bill are currently being hammered out in a special committee.)

The Senate bill would make permanent a pilot project started in 2008, funding a tool to facilitate local purchasing at around 350 million dollars. It would also step up USAID’s ability to engage in local procurement by an additional 20 percent.

“Politically, we’ve really seen a sea change,” she says. “In 2008, this issue was so controversial that we couldn’t even get it to a vote. This time we lost by just 10 votes. Policy will take a little while to catch up, but we see these changes now as first steps.”

An important part of the changed political landscape has to do with the groups – particularly the implementing NGOs, the farming and shipping lobbies – that had long opposed tweaks to U.S. food aid policy. Gerson says this “iron triangle has been irrevocably broken”.

Several of the largest global humanitarian NGOs, including CARE and Save the Children, have now decided to support reforms. So too have some of the most prominent voices in the U.S. agriculture sector, including the agribusiness giant Cargill and the National Farmers Union (NFU).

Indeed, these latter two supported President Obama’s ambitious overhaul proposal. “[T]here is, and must continue to be, a clear, continuing role for American agriculture in food aid. However, our modern globalized food system makes the case for greater flexibility in our aid programs,” Roger Johnson, the NFU’s president, wrote in May.

As yet, however, the shipping groups continue to support requirements that half of U.S. food aid be transported on U.S.-flagged ships.

“The shipping lobby remains staunchly opposed,” Oxfam America’s Munoz says, “and they bear a lot of the responsibility for the failure of the movement on reform.”