WASHINGTON, Nov 5 2013 (IPS) - On the 34th anniversary of the seizure by Iranian militants of the U.S. Embassy in Tehran, a growing number of experts here believe Washington and the Islamic Republic may be moving toward détente, if not rapprochement. 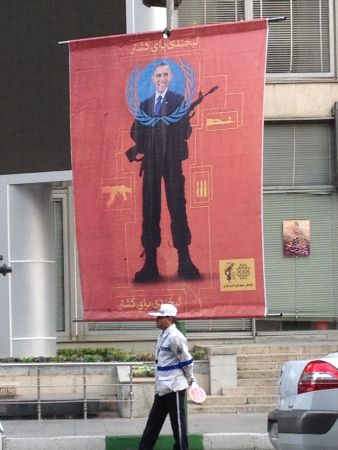 Demonstrators in the streets of Tehran Monday outside the former U.S. embassy. Credit: Farideh Farhi

While hardline demonstrators in Tehran Monday marked the anniversary with ritual chants outside the long-abandoned embassy of “Death to America!”, U.S. negotiators and their Iranian counterparts were preparing for critical talks in Geneva later this week on the future of Iran’s nuclear programme later this week with their partners from the so-called P5+1 (the U.S., Britain, France, Russia, China plus Germany).

The talks are also likely to include a bilateral tete-a-tete between the heads of the countries’ delegations. It would be the third such session since Secretary of State John Kerry spent an hour with Iranian Foreign Minister Mohammed Javad Zarif on the sidelines of a P5+1 meeting at the U.N. General Assembly in New York at the end of September.

That meeting – the highest-level talks between Washington and Tehran since the 1979 Revolution – was followed by the unprecedented phone call by Barack Obama to Hassan Rouhani, as Iran’s new president was making his way to JFK airport after his highly successful four-day sojourn at the U.N.

The speed and intensity of these exchanges have clearly injected growing confidence here, and apparently in Tehran, too, that both sides are seriously committed to reaching an accord on Iran’s nuclear programme — and thus opening a new chapter in bilateral relations — despite opposition from powerful hard-line constituencies who, for now at least, have been put on the back foot.

Thus, while Monday’s demonstration celebrating the embassy seizure – which launched the 444-day “hostage crisis” that no doubt contributed to the 1980 election defeat of President Jimmy Carter and seared a deeply hostile image of Iran in the U.S. collective consciousness of most Americans – drew thousands of anti-U.S. protestors Monday, the ruling authorities had made clear in previous days that diplomacy would go forward.

Thus, banners attacking “the Great Satan” and the alleged naivete of Zarif and Rouhani that appeared last week in various parts of Tehran in advance of Monday’s anniversary were removed by municipal workers. According to a tweet by the New York Times correspondent in the Iranian capital, they also “rushed” to the demonstration to quickly dispose of its remnants after the crowd had dispersed.

More important, Iran’s supreme leader, Ayatollah Ali Khamenei, who had earlier suggested disapproval of Rouhani’s conversation with Obama, came out firmly in favour of the president and his team in a speech to students on the eve of the anniversary.

“No one should consider our negotiators as compromisers. They are our children and children of the revolution. They have a difficult mission, and no one must weaken an official who is doing his job,” he declared in what was widely considered here as his strongest defence of Rouhani and Zarif to date.

Meanwhile, the Obama administration has taken pains ever since the last P5+1 talks with Iran in Geneva Oct. 15-16 to deal with opposition to engagement both here, where it is centred in Congress where the Israel lobby exerts its greatest influence, and among its allies abroad, notably Saudi Arabia and the United Arab Emirates, as well as Israel.

On the home front, a series of high-level meetings appears to have persuaded key senators from both parties to hold off on acting on a pending sanctions bill already passed by the House of Representatives that would punish foreign companies or countries for importing any Iranian oil until at least after this week’s talks, scheduled for Thursday and Friday.

Iran experts have warned that new sanctions would almost certainly strengthen Iran’s hard-liners, forcing a suspension in negotiations at the least. The administration also argued that such legislation, coming at a moment of growing optimism, also risked fracturing the international coalition that has so far mostly respected the sanctions regime.

Speaking Friday at the Council on Foreign Relations, Sen. Carl Levin, who heads the powerful Armed Services Committee, insisted that Washington had an obligation to test Rouhani’s promises to clear up doubts about the peacefulness of Iran’s nuclear programme.

“Whether it is a 10 percent, 40 percent, or 60 percent chance, it should be tested and probed,” he said. “We should not at this time impose additional sanctions.”

Even some Republicans suggested they were willing to be patient. Sen. Mike Johanns of Nebraska, who noted he has voted for every previous sanctions bill, said he was “open” to waiting. “The whole idea behind sanctions was to get people to talk, to deal with the issue,” he told ‘The Hill’ newspaper.

Senior administration officials have also met with leaders of key hawkish Jewish organisations, including the powerful American Israel Public Affairs Committee (AIPAC) and the Anti-Defamation League (ADL), which, aside from Christian Zionist groups, make up the influential Israel lobby.

Along with Israeli Prime Minister Binyamin Netanyahu, these groups have pushed hardest for tougher sanctions, as well as concrete moves to make the threat of military force to destroy Iran’s nuclear facilities more credible.

While accounts of these consultations have conflicted, the administration appears to have asked for a pause in lobbying for new sanctions for at least a few months.

The Jewish leaders reportedly agreed to a limited “time out” during which they would neither actively push for nor lobby against any sanctions legislation, although one of the participants, David Harris of the American Jewish Committee, called for Senate approval of the pending package in an op-ed published by Israel’s Haaretz newspaper Monday.

On the foreign front, meanwhile, Kerry was dispatched late last week to the Middle East to reassure Saudi Arabia, Tehran’s arch-rival whose recent blunt criticism of U.S. policies in the region has shocked many observers, and its Gulf allies that Obama was indeed determined to prevent Iran’s acquiring a nuclear weapon. He will be travelling on to Israel later this week.

At the same time, Wendy Sherman, Washington’s chief negotiator at the P5+1 talks, appeared on Israel’s Channel 10 news programme to convey a similar message of the administration’s determination. Washington, she said, had no intention of abandoning key oil and banking sanctions until a comprehensive agreement over Iran’s nuclear programme was reached but was prepared to ease some sanctions as part of an interim confidence-building process.

She did not provide details on what a final agreement or interim measures would consist of. While Israel publicly insists that the price for lifting sanctions should be Iran’s total dismantling of its nuclear programme, experts here believe that is not a realistic goal.

“…[N]o matter how devastating the sanctions, no matter how persistent we are at the negotiating table, and no matter how credible the military option we are able to threaten – Iran will not agree to the maximalist terms that the Israeli government and some Americans advocate,” warned Robert Einhorn, who served as a top non-proliferation adviser at the State Department in Obama’s first term, in a widely-noted speech late last month in which he laid out details of what he called a “good deal,” as opposed to an “ideal” one.

The former would limit Iran’s ability to quickly achieve “breakout capability” – that is, to move quickly to build a nuclear weapon before the U.S. or the international community could take effective action against stop it. Such a deal would include, among other measures, a significantly enhanced inspection regime by the International Atomic Energy Agency (IAEA), strict limits on uranium enrichment (five percent), the number of centrifuges, and stockpiles of enriched uranium.