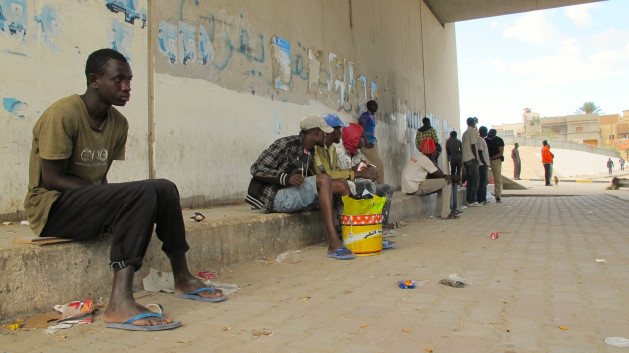 African migrants wait for work in Tripoli that might pay eventually to take them to Lampedusa in Italy. Credit: Karlos Zurutuza/IPS.

TRIPOLI, Dec 8 2013 (IPS) - Youssef crossed the Sahara desert with a folded school map of Europe in his pocket. “Could you please point [out] Lampedusa in the map for me? I cannot find it.”

The 28-year-old Nigerian undertook an arduous journey from the capital Abuja to Libya in the hope of some day making it to the Italian island of Lampedusa, 600 km northwest of this city.

“There are no direct flights from Abuja to Tripoli, so I came overland. I paid 800 euros for a five-day journey across the desert on top of a heavily packed truck. They told me to tie myself to it as they would not stop if anybody fell down,” he tells IPS.

“Boats usually stop going by November due to difficult sea conditions, but there is still a slight chance of leaving before the year ends."

Libya continues to be a gateway for thousands of undocumented African migrants who are willing to risk its violent militias, harsh detention centres and often fatal rides on overloaded, rickety boats to set sail for Lampedusa – for them the closest point in Europe. Even Asians have been found to use Libya as a transit point.

As they dream desperately of greener pastures, the migrants do odd jobs to earn enough to pay for the boat ride.

Youssef stands by the roadside holding some roller paint. It’s easy to spot him among the dozens of sub-Saharan Africans who stand under the Gargaresh bridge south of Tripoli, until somebody picks them up for a day of work.

The average daily payment for this kind of work is 20 dinars (12 euros), but not everyone is lucky enough to find work at this rate.

“Last week I worked for 10 hours in a row at a construction site, but they didn’t pay me anything at the end of the day. When I started to complain, they put a gun to my head and told me to go away,” recalls Suleyman, a 23-year-old Malian who can hardly wait to leave Tripoli “forever”.

“I’d rather go back home as this is no life. Clashes between militias are constant here and I often get into trouble with them just because I’m black,” he says. “As soon as I have enough money, I’ll head for Lampedusa or it may be too late.”

Work is scarce and the competition severe due to the growing number of migrants gathering in Gargaresh. The charge for a seat on one of the many boats leaving the Libyan coast is around 1,000 dollars. Even if an exhausting day of work is fully paid for, it could take years to save a sum like that.

Besides, there is always a chance of missing the boat.

“Boats usually stop going by November due to difficult sea conditions, but there is still a slight chance of leaving before the year ends,” says 27-year-old Christian.

According to him, growing instability in Libya is pushing many to take greater risks to make it to Lampedusa despite the rough sea.

During the regime of Muammar Gaddafi, Libya turned into a major transit point for African migration to Europe. Gaddafi had famously asked European countries for money to stop the flow.

After he was ousted and killed in 2011, the number of those fleeing the north has increased as lack of security has made it easier for human traffickers to operate.

“Amid growing unrest in the country, the current Libyan government is too busy to monitor the coast. Now our main hurdle is the waves,” a human trafficker told IPS on condition of anonymity.

He admitted to earning around 20,000 euros from each successful trip to Lampedusa. Payments, he said, were only accepted on arrival and through an intermediary in Tripoli.

But the coast is not unwatched.

Imran, 21, came all the way from the Pakistani part of Kashmir to end up sailing aimlessly on a boat for three hours before they were captured by the Libyan coastguard.

“The captain simply didn’t know the route and he got lost,” recalls the young Kashmiri, who spent three months in jail after his first and only attempt to get to Lampedusa.

Despite the harsh conditions at the Libyan detention centre, he still claims he was lucky. “We were around 50 in the same cell, but at least the guards never hit me. For the black guys, though, it was completely different. They would be tortured and beaten in the most brutal way and on a daily basis.”

Women, he adds, were asked for sex in exchange for their release.

His testimony is corroborated by an Amnesty International (AI) report released last June, where the human rights NGO called on the Libyan government to end indefinite detention of refugees, asylum seekers and migrants, including children, who had ended up there solely for immigration purposes.

Imran hopes to try a different boat next time.

“I only paid 500 dinars (300 euros), but the cheap boats, most of them run by Somalis, are the ones that never make it. Next time I’ll try one run by Syrians. They’re way more expensive, but most of them reach shore,” claims Imran, who now works at a hotel as a cleaner.

Elijah, his workmate, is considering the possibility of joining Imran in his next attempt. So far only one thing has prevented him from taking the last step – the risk involved.

“Even if you pay the regular 1,000 dollars fee, you cannot see the boat until the very moment you leave. And they won’t let you pull back,” explains the 28-year-old from Arlit in northern Niger.

The migrants and even local fishermen know only too well the risk of getting into a packed, fragile, raft-like boat.

As Abdala Gheryani, who works at the tiny fishing port of Gargaresh, says, “Every now and then I find corpses trapped in my nets.”