WASHINGTON, Dec 21 2013 (IPS) - This week’s introduction by a bipartisan group of 26 senators of a new sanctions bill against Iran could result in the biggest test of the political clout of the Israel lobby here in decades. 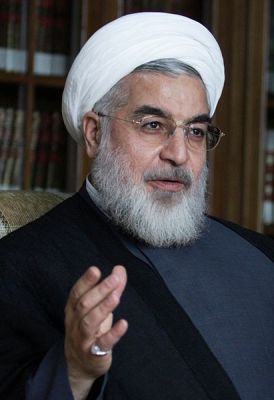 The government of President Hassan Rouhani has warned repeatedly that the demand that Iran dismantle its nuclear programme entirely is a deal-breaker. Credit: Mojtaba Salimi/cc by 2.0.

The White House, which says the bill could well derail ongoing negotiations between Iran and the U.S. and five other powers over Tehran’s nuclear programme and destroy the international coalition behind the existing sanctions regime, has already warned that it will veto the bill if it passes Congress in its present form.

The new bill, co-sponsored by two of Congress’s biggest beneficiaries of campaign contributions by political action committees closely linked to the powerful American Israel Public Affairs Committee (AIPAC), would impose sweeping new sanctions against Tehran if it fails either to comply with the interim deal it struck last month in Geneva with the P5+1 (U.S., Britain, France, Russia, China plus Germany) or reach a comprehensive accord with the great powers within one year.

To be acceptable, however, such an accord, according to the bill, would require Iran to effectively dismantle virtually its entire nuclear programme, including any enrichment of uranium on its own soil, as demanded by Israeli Prime Minister Benjamin Netanyahu.

The government of President Hassan Rouhani has warned repeatedly that such a demand is a deal-breaker, and even Secretary of State John Kerry has said that a zero-enrichment position is a non-starter.

The bill, the Nuclear Weapon Free Iran Act, also calls for Washington to provide military and other support to Israel if its government “is compelled to take military action in legitimate self-defense against Iran’s nuclear weapon program.”

The introduction of the bill Thursday by Republican Sen. Mark Kirk and Democratic Sen. Robert Menendez followed unsuccessful efforts by both men to get some sanctions legislation passed since the Geneva accord was signed Nov. 24.

Kirk at first tried to move legislation that would have imposed new sanctions immediately in direct contradiction to a pledge by the P5+1 in the Geneva accord to forgo any new sanctions for the six-month life of the agreement in exchange for, among other things, enhanced international inspections of Iran’s nuclear facilities and a freeze on most of its nuclear programme.

Unable to make headway, Kirk then worked with Menendez to draw up the new bill which, because of its prospective application, would not, according to them, violate the agreement. They had initially planned to attach it to a defence bill before the holiday recess. But the Democratic leadership, which controls the calendar, refused to go along.

Their hope now is to pass it – either as a free-standing measure or as an amendment to another must-pass bill after Congress reconvenes Jan. 6.

To highlight its bipartisan support, the two sponsors gathered a dozen other senators from each party to co-sponsor it.

Republicans, many of whom reflexively oppose President Barack Obama’s positions on any issue and whose core constituencies include Christian Zionists, are almost certain to support the bill by an overwhelming margin. If the bill gets to the floor, the main battle will thus take place within the Democratic majority.

The latter find themselves torn between, on the one hand, their loyalty to Obama and their fear that new sanctions will indeed derail negotiations and thus make war more likely, and, on the other, their general antipathy for Iran and the influence exerted by AIPAC and associated groups as a result of the questionable perception that Israel’s security is uppermost in the minds of Jewish voters and campaign contributors (who, by some estimates, provide as much as 40 percent of political donations to Democrats in national campaigns).

The administration clearly hopes the Democratic leadership will prevent the bill from coming to a vote, but, if it does, persuading most of the Democrats who have already endorsed the bill to change their minds will be an uphill fight. If the bill passes, the administration will have to muster 34 senators of the 100 senators to sustain a veto – a difficult but not impossible task, according to Congressional sources.

That battle has already been joined. Against the 13 Democratic senators who signed onto the Kirk-Menendez bill, 10 Democratic Senate committee chairs urged Majority Leader Harry Reid, who controls the upper chamber’s calendar, to forestall any new sanctions legislation.

“As negotiations are ongoing, we believe that new sanctions would play into the hands of those in Iran who are most eager to see negotiations fail,” wrote the 10, who included the chairs of the Intelligence and Armed Services Committees, Dianne Feinstein and Carl Levin, respectively. They also noted that a new intelligence community assessment had concluded that “new sanctions would undermine the prospects for a successful comprehensive nuclear agreement with Iran.”

Their letter was followed by the veto threat by White House spokesman Jay Carney and a strong denunciation of the bill by State Department spokesperson Marie Harf. She accused the sponsors of “directly contradict[ing] the administration work. …If Congress passes this bill, …it would be proactively taking an action that would undermine American diplomacy and make peaceful resolution to this issue less possible.”

But none of that has deterred key Israel lobby institutions. “Far from being a step which will make war more likely, as some claim, enhanced sanctions together with negotiations will sustain the utmost pressure on a regime that poses a threat to America and our closest allies in the Middle East,” the Anti-Defamation League (ADL) argued Thursday.

And, in a slap at both the administration and the Senate chairs,  the Conference of Major American Jewish Organisations complained about criticisms of the bill’s proponents. “Some of the terminology and characterizations used in the latest days, including accusations of warmongering and sabotage, are inappropriate and counterproductive,” it said.

Since it lost a major battle with former President Ronald Reagan over a huge arms sale to Saudi Arabia in the early 1980s, the Israel lobby has generally avoided directly confronting a sitting president, but, at this point, it appears determined to take on Obama over Iran.

For some observers, its opposition is difficult to understand, particularly because key members of the Israeli national security establishment have conspicuously declined to join Netanyahu in denouncing the Geneva deal.

“I’m amazed that they’ve taken it this far,” said Keith Weissman, a former AIPAC specialist on Iran. “Bottom line is that if the Iranians comply with the terms of the deal – which it seems like they are doing so far, despite some internal resistance – they are further from breakout capacity [to produce a nuclear weapon] than they were before the deal.”

But Douglas Bloomfield, a former senior AIPAC executive, suggested the motivation may be of a more practical nature. “It’s good for business,” he told IPS. “AIPAC has spent the last 20 years very, very effectively making a strong case against Iran, and Iran has been a great asset to them.”

“They want to show they’re not going to give up on this; they’ve built a huge financial and political base on it. …Most of the Jewish groups and all of Congress have been on auto-pilot on Iran; nobody ever thought you might actually get a deal… In AIPAC’s case, they’re terrified they’re going to lose their major fund-raising appeal.”