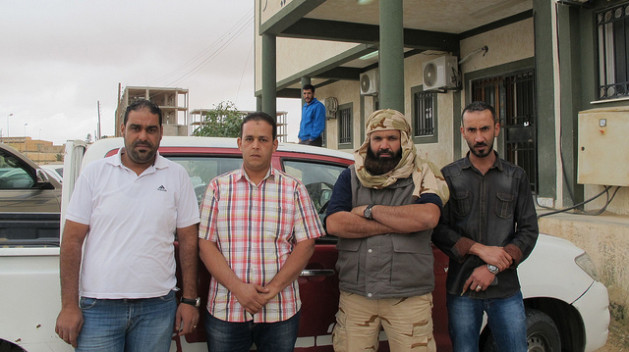 Militia commander Ziad Zabala (with a beard) poses next to three policemen at the entrance to the Jadu Police station. Credit: Karlos Zurutuza/IPS

JADU, Libya , Jan 2 2014 (IPS) - Everybody in this mountain village is seemingly familiar with the new regulations. “People other than militiamen or policemen will be fined 500 dinars [around 300 euros] for carrying guns,” local resident Younis Walid tells IPS.

”If the offence is repeated a second time, the fine will be double; you do it a third time and you are taken to prison,” adds the 21-year-old student, paraphrasing article 5 of the so-called Jadu Draft for a National Agreement.

Residents from all walks of life of Jadu, a Berber or Amazigh location 150 kilometres southwest of Tripoli, in the Nafusa mountain range, agreed on the ground-breaking document on Oct. 25.

“It´s a compilation of six elementary yet very necessary articles to handle security in our area. The power vacuum after the war is dragging the country towards chaos,” Shokri Agmar, a local lawyer, explains to IPS.

Almost three years after Muammar Gaddafi (1969-2011) was ousted, no date has yet been set for the election of a 60-member constituent assembly to draft a new constitution.

The process, expected to take place sometime in the first quarter of 2014, has failed to awaken enthusiasm among the population, especially the country´s minorities. The Amazighs, Tuaregs and Tubus altogether have only been granted six seats.

Meanwhile, the new government can hardly cope with the myriad armed groups who only pay allegiance to local, or even individual, interests. Last November, Tripoli witnessed the biggest spike in violence since the end of the war in 2011, when a peaceful demonstration against the impunity with which militias operate in the country’s capital ended with dozens killed and almost 500 injured.

“If our neighbours in Zintan [an Arab enclave in this predominantly Berber area] have not attacked us so far it´s only because they know that ours is also a very powerful militia. And this pattern applies to the whole country,” states Agmar. “All Libyan militias are preparing for war.”

It may well be a de facto rule for the rest of the country, but article 1 of the Jadu draft agreement grants official recognition to the local militia as the “main security force in the area alongside the local police.”

“There are 15 of us policemen in Jadu,” a local police officer told IPS. “We work in shifts of five men but we only deal with small issues as we do not have the training or equipment to tackle bigger threats. For the latter, the agreement states that we should get support from the local militia.”

The official didn´t want to disclose his name but had no problem getting his picture taken.

Whereas the higher ranks among the regime forces were removed after the revolution, regular policemen still receive a government salary. And communication with the local militia appears to be fluent. Commander Ziad Zabala shows up for a mid-morning coffee break.

“Luckily enough, Jadu is among the quietest places in Libya,” Zabala tells IPS before pointing on a map to the bypass roads locals take on their way down to Tripoli. “People here are peaceful but we have to watch to prevent aggressions from our neighbours in Zintan or those down the valley.

“None of us takes the direct route up here. You are likely to lose your car if you dare to cross that territory,” warns the former fighter who is now a paramilitary officer.

Sitting next to him, militia chief commander Yousif Said confirms that his force is “independent from the Libyan Ministry of the Interior.” Apparently, many other bodies and institutions also remain in some kind of legal limbo.

“We have no prison as such in Jadu so we have reached an agreement with the one in Gheryan [60 kilometres southeast of Tripoli] so they can host our prisoners until they go on trial,” Said tells IPS.

According to a United Nations report released in October 2013, around 8,000 detainees remain in custody without charges, under suspicion of fighting alongside Gaddafi’s troops. The report also highlighted that countless other individuals are held by local militias under conditions worse than the ones in the official prisons.

Article 4 in Jadu´s agreement exhorts the families of former prisoners who escaped after the war to hand them over to the local council authorities. And Article 3 gives the local elders full competence to settle disputes within the community.

“It´s a group of eight elected people who have historically enjoyed the support and respect of the community,” explains Shokri Agmar. “Whatever legal issue you have, you would ask for their help, but you would never turn to the official authorities,” adds this young lawyer from a lawless country.

According to Agmar, it was actually Jadu that mediated between Tripoli and Misrata after the clashes in November, a move which led to a progressive withdrawal of Misrata militias from the country´s capital.

Civil servants languish behind their desks at Jadu´s District Court, a three-storey building at the entrance to the village. All of them refuse to speak with IPS on the agreement in question.

From the empty corridors papered with portraits of those killed during the revolution, Agmar points out that the draft doesn´t explicitly take the District Court into account, but doesn’t reject it either.

“You never know, if this country ever starts to function normally we may need to include them at some point.”

For the time being, it´s difficult to know which is number one among Libya´s most pressing problems. Faizal Egira, a local teacher, shares his own view:

“A teacher in Libya only gets 600 dinars whereas a militiaman is earning 1000,” complains this teacher on strike from the town´s best-known pizza restaurant.

Egira, 50, admits that the agreement is a “starting-point rather than a definitive solution.”

Asma Bin, an NGO worker and also a native Berber, agrees. But she says she feels “rather sceptical” about the likelihood of any significant improvement in the short term.

“This is nothing new as every single town or village in Libya has its own rule,” explains the 30-year-old woman. “The only difference in Jadu is that they wrote it on a sheet of paper.”