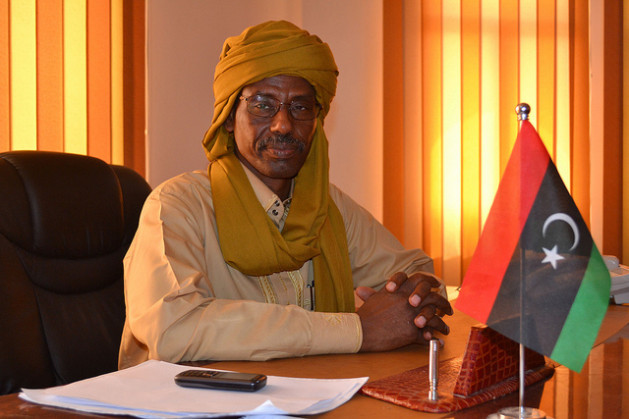 Colonel Barca, commander of Mourzouk, is in contact with the federalists from Eastern Libya. Credit: Maryline Dumas/IPS

SEBHA, Libya , Sep 25 2013 (IPS) - “The government doesn’t care about us because we are from the south,” Mohamed Salah Lichekh, head of the Oubari local council in southern Libya, told IPS, expressing the majority sentiment in this part of the country.

The feeling of being forgotten by Tripoli, which is very strong in southern Libya, is bringing the three ethnic groups – the Arabs, Toubous and Tuaregs – from the Fezzan region in the south together against the Libyan state.

Despite clashing after the revolution which brought an end to Muammar Gaddafi’s rule in 2011, these three ethnic groups today live in relative calm. They are united against a government they accuse of wrongs, the first being its absence in the region.

Oubari is a predominantly Tuareg town, situated 200 kilometres west of Sebha, the capital of Fezzan. In this town of 40,000 people, there are problems with the telephone network. And the police presence on the damaged roads is rare.

“My cousin is a policeman but he only goes to the police station to collect his pay,” one local resident who requested anonymity told IPS.

This situation is not uncommon in this highly fragmented region. The head of the local council in Sebha, Ayoub Zaroug, said “The Chief of Police explained to me that his men don’t want to work because they are afraid.”

Ibrahim Ahmed, the chief of Agar, a small Arab village in Mourzouk, told IPS: “Yesterday [Sept. 3], there was a fire. We do not have a fire brigade, so we called Mourzouk town. But they didn’t have one either.

“We don’t have anything: no army, and no functional police force. Our police station doesn’t have cars, or radio communication – there is no support from Tripoli. In fact, all public services are suffering.”

Faced with these shortages, Libyans in the south have learned to manage by developing parallel systems based on tribal ways of life, Agila Majou, a representative of the Arab tribe Ouled Slimane, told IPS. “Today, since the government is incapable, we resolve problems between the tribes.”

For example in Qahira, a poor neighbourhood in Sebha, “a group of 60 people made up of revolutionaries and resident volunteers” provides security, according to the Toubou head of this slum, Adam Ahmed. “They patrol the area and use their own arms. When there is a problem, the tribal leaders come together,” he told IPS.

Ahmed added that most criminals flee and hide in partially constructed buildings that were abandoned by an Indian company during the revolution. “We know where they are, but no one is arresting them.”

An annoyed Youssef Souri from the Mourzouk local council added: “And even if they are arrested…We have asked the government three times to reopen the court. But we have not received a response.

“When a robbery is committed, if the person is arrested, he spends a few days in prison. His family then acts as a guarantor and pays a security deposit, which is repaid after the trial.”

In criminal cases, the procedures differ: “Murderers are sent to Sebha, where judges continuously postpone judgements for fear of reprisals,” Souri told IPS.

This de facto autonomy has given certain sections of the population ideas: why not vote for a Libyan federation? This idea, which is taking centre-stage in Cyrenaica in east Libya, has begun to germinate in the hearts of people in the south.

Take for example Ibrahim Youssef, director of an organisation in Mourzouk, who said “I am a federalist because I want Fezzan to benefit from its wealth which currently goes entirely to Tripoli. But I want a real federation, not three countries like people in the east [are calling for].”

Colonel Wardacoo Barca, who is in charge of security in Mourzouk, admitted to having “met with federalists from the east.” He told IPS, however, that “We are going to meet with the Tuaregs to draft a proposal for government.

“We want the money earned from Fezzan petroleum to come back to us and also, better representation in government and in the diplomatic corps. If Tripoli doesn’t respond, we will support the formation of a federation,” he said.

“If we demand a federal state, we are convinced that all our African neighbours will support us.”

From under his yellow cheich or scarf, Barca added: “What we really want is a government that is present everywhere…and some form of recognition.”

For the Tuaregs, recognition would also include nationality. A member of the Oubari Reconciliation Commission, Jeli Ali, stressed that 14,000 Tuareg families, who have not been able to provide proof of their ancestors’ birthplace have not received their Libyan national identity number – which is essential for university enrolment and employment as a civil servant.

“We are victims of racism,” Ali, a Tuareg, complained. “Who are the original inhabitants of Libya? Not the Arabs, but the Tuaregs, the Toubous and the Berbers. We have land as proof of our nationality, they have paper,” he told IPS.

Ali warned: “We are not going to let it be. History shows that rights are eventually obtained, by force if necessary!”