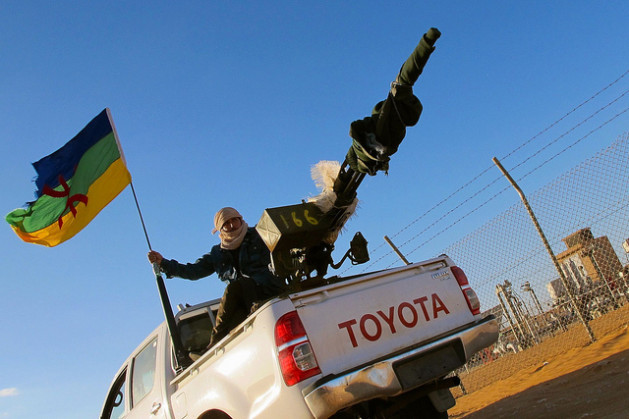 One of the Berber militiamen blocking the gas and crude oil complex in Nalut, Libya. Credit: Karlos Zurutuza/IPS

ZWARA, Libya , Nov 9 2013 (IPS) - “Oil tankers won´t get crude from this port until Tripoli finally meets our demands,” says Younis, one of the Amazigh rebels today blocking one of Libya´s largest gas and crude oil plants.

Located 100 kilometres west of Tripoli, the Mellitah complex is a joint venture between the Italian oil and gas multinational ENI and Libya´s National Oil Corporation (NOC). The plant remains blocked since a group of armed activists took over the docking port for oil tankers, on Oct. 26. Younis provides IPS with the details:

“We arrived at night by sea from Zwara [the city near Mellitah] and we’ve been organising ourselves in shifts of 30 men,” explains the activist under the tent that hosts the command centre for this strategic location.

“We are the true guardians of the revolution” reads a banner displayed next to the tent.

“In 2011, we Amazighs took up arms against a regime that had treated us like dogs for decades. But two years later we are still struggling for our rights against the new Libyan government,” laments Younis, as he helps to unload supplies from a small boat that has just arrived.

Also called Berbers, the Amazigh are indigenous inhabitants of North Africa with a population extending from Morocco´s Atlantic coast to the west bank of the Nile, in Egypt. Touareg tribes deep in the Sahara desert share the same common language.

The arrival of the Arabs in the region in the seventh century was the starting point of a gradual process of Arabisation that was sharply boosted during Muammar Gaddafi´s four-decade rule in Libya. Estimates put the number of Amazighs in this country at around 600,000 – about 10 percent of the total population.

“The government does not recognise us and we do not recognise the government,” reads another of the banners displayed throughout the complex. Most of them are written in three languages: Arabic, English and Tamazight, the Amazigh language which also has its own alphabet.

“We´re strongly against the committee in charge of writing the new constitution, as we have literally no chance to achieve our rights as a people through it,” says Ayub Sufian, another member of the rebel group controlling the port.

He is referring to the 60-member constituent assembly set to work on the draft of Libya’s post-Gaddafi constitution. The crux of the matter seems to be the six-seat quota given to the country´s minorities.

“Two for the Amazigh, two for the Touareg and two for the Tubu [a group living in the far south of the country],” the rebel tells IPS.

“It is a system that will rule on majorities of two-thirds plus one, so you basically need 41 votes out of 60 to reach an agreement. What are our choices as non-Arab Libyans? We want our language to be co-official, and we want to be able to decide on key issues concerning the country,” says the rebel spokesman, who would favour an agreement “based on consensus, not on majorities.”

Today Sufian wears a camouflage uniform and a gun at his waist. But he is also one of the members of the Amazigh Supreme Council, an umbrella organisation for every Libyan Amazigh town. Most of the towns are distributed across the Nafusa mountain range, in the country´s northwest, but Zwara is an unexpected yet compact enclave on a flat coastal spot bordering Tunisia.

The lack of an effective central government in the country has led to a fragmentation of power along regional and tribal lines. The former insurgents against Gaddafi have turned into a myriad of militias, each one in control of their places of origin and who only pay loyalty to their local councils. And the Amazigh rebels blocking the plant are no exception.

“We receive a lot of food and supplies from Zwara. The whole city is with us,” Sufian claims.

The reasons behind the alleged “unconditional” support are detailed by Fathi Buzakhar, a senior Amazigh activist today working for the Libyan Centre for Strategic and Future Studies, an NGO with offices throughout the country.

“So far we have conducted many peaceful protests and we have also met several times with United Nations representatives, but it has simply not worked. The action in Mellitah takes it a step further,” Buzakhar tells IPS from his home in Tripoli.

“Our region in the Nafusa mountains played a key role in the takeover of Tripoli during the war. They used us and now they reject us under the ridiculous pretext that we are working under a foreign agenda,” laments Buzakhar, who recently visited the oil pipeline south of Nalut, 250 km southwest of Tripoli, which has also remained blocked by the Amazighs, since Sept. 29.

IPS also visited the complex, a cluster of pipes and solar panels under the control today of Amazigh militias from the Nafusa mountain range, Libya´s main Berber stronghold southwest of Tripoli.

“People are coming from every corner, even our Tuareg brothers from the south. They followed suit and blocked the Ubari plant [a complex run by Spain’s Repsol company,  700 km southwest of Tripoli], “ Jadu militia spokesman Omar Srika told IPS.

The rebel had a message to convey: “All this started as a move to get language recognition, but today we also want to tell all those interested in setting foot on Amazigh soil that they will have to take us into account from now on.”

So far the government has not made any military or political move on Mellitah and the Libyan parliament also decided not to address the issue in its last session, on Nov. 5.

In the meantime, blocking gas and crude oil complexes has seemingly turned into a trend to pressure the government across the country.

The crews of the anchored tugboats in Mellitah kill time fishing until a solution comes, while similar protests across the country have knocked down Libya´s crude production by 90 percent.

Workers at the Mellitah plant confirmed to IPS that while the country’s oil shipments -around 160,000 barrels of crude a day – remain interrupted, neither the complex nor its staff have suffered any damage, aggression or threats by the occupants.

However, the rebels say they are willing to take new steps in their protest.

“So far we have only cut oil supplies. Gas is flowing at 40 percent. But if our demands are not immediately addressed in the next few days we will also block the underwater gas pipeline completely,” a rebel spokesman told IPS at the port.

Collateral victims of the dispute between Tripoli and the Amazigh would then be the Italians, who would see their gas supplies on the brink at the gates of winter.