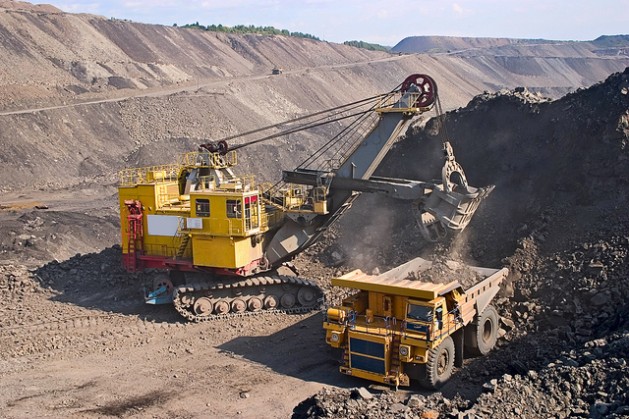 In addition to the economic issues of the coal leases, environmentalists aee equally concerned about the environmental issues that arise from coal mining. Credit: Bigstock

WASHINGTON, Feb 5 2014 (IPS) - The U.S. government is violating federal leasing policies when it sells land to certain coal-mining companies, according to a new audit from an official watchdog agency.

The practice could be costing taxpayers millions of dollars even as mining operations degrade the environmental integrity of the Powder River Basin in the western U.S. states of Wyoming and Montana and lead to the production of large-scale carbon emissions. Although federal regulations stipulate that the Bureau of Land Management, a federal agency, must auction off coal tracts in a competitive bidding process, a Government Accountability Office (GAO) report released Tuesday found that this process wasn’t being followed.

“There are about five billion tonnes of federal coal somewhere in the leasing pipeline right now.” -- Kelly Mitchell

Instead, for about 90 percent of the 107 leased tracts of land looked at by the GAO, only one company had bid on the land – typically the same company that submitted the application.

“[The GAO] offers a convincing argument that the programme lacks integrity,” Tom Sanzillo, the director of finance for the Institute of Energy Economics and Financial Analysis (IEEFA), a think tank, told IPS. “Because of a lack of independent oversight of 30 years of federal leases, they haven’t reviewed any of them.”

While an inspector-general for the U.S. Department of the Interior (BLM’s parent agency) indicated in a report last June that the U.S. had lost 60 million dollars as a result of undervalued leases, Sanzillo believes that the total revenue loss is far greater. In an analysis responding to those findings, Sanzillo noted that the inspector-general did not take into account the BLM’s methodological flaws in establishing the value of public coal.

The inspector-general “identifies at least three weaknesses in the BLM program,” he wrote, “no independent verification of engineering and geological data, no revenue estimates for projected export sales and a failure to use comparable sales data when setting bid prices.”

Furthermore, both the GAO and inspector-general reports note that the BLM has not included Arch and Peabody’s revenues from coal exports when determining the value of the publicly leased coal, further undervaluing its true worth. (The BLM did not respond to IPS’s inquiry by deadline.)

“They’re giving away federal access at a price that is far below what they should be giving it away for,” said Sanzillo. “Therefore the federal government, and particularly the states of Wyoming and Montana, are being short changed.”

The GAO did a similar review of coal leases in the Powder River Basin in 1983. At that time, the agency found that the government was losing some 100 million dollars as a result of undervalued coal leases, but the GAO’s recommendations to rectify the problem were never implemented.

The GAO’s more recent report recommends that the BLM use more than one method to determine the true value of its coal while taking export profits into account. It also suggests that the agency develop a reporting mechanism and post information about its lease sales on its website.

While the Department of the Interior has agreed with these recommendations, Sanzillo’s analysis indicates that BLM has been highly resistant to transparency.

In addition to the loss of revenue, coal-mining operations in the Powder River Basin have profoundly impacted the region and raised some serious concerns among local and national environmental advocacy groups.

The region’s total carbon emissions are expected to increase even further once the BLM grants leases for more coal mining.

“There are about five billion tonnes of federal coal somewhere in the leasing pipeline right now,” said Mitchell. “If all that coal is leased, it would unlock more than 8.3 billion metric tonnes of carbon-dioxide, or the annual emissions of more than 1.7 billion cars.”

The Powder River Basin Resource Council has asked the BLM to suspend coal-mining operations until it rectifies the flaws in its leasing programme. In addition to the economic issues of the coal leases, the organisation is equally concerned about the environmental issues that arise from coal mining.

“We believe coal leasing should be suspended until some of the environmental impacts get addressed,” Shannon Anderson, an organiser with the Powder River Basin Resource Council, a Wyoming-based environmental protection group, told IPS.

“There are impacts from reduced air quality, loss of water and major draw-downs of our aquifers, which are primary drinking-water sources. We’ve seen a dramatic loss of acreage available to the public for recreational purposes, like hunting, hiking and [livestock] grazing.”

Wyoming produces 40 percent of all coal mined in the U.S. and the federal government owns 85 percent of the state’s coal. This makes Wyoming one of the most popular states for the energy industry to lease public land.

Opposition to the practice of leasing public lands to the energy industry has grown in recent years. The administration of George W. Bush auctioned off of 103,000 acres of land in Utah, another western state, for coal and gas leases, a move that was met with widespread public protest.

According to the GAO, 74 percent of public land leases issued to energy companies between 2007 and 2009 were protested by the public in Wyoming, Utah, Colorado and New Mexico.

In early 2009, the administration of President Barack Obama instructed the BLM that “there is no presumed preference for oil and gas development over other uses”. It also began telling the energy industry which pieces of land are most suitable for mining, drilling or “fracking” with minimal environmental impact.

However, the energy industry may still nominate parcels of public land to lease, and the reforms have not addressed the issue of undervalued leases or the public’s environmental concerns in the Powder River Basin and elsewhere.