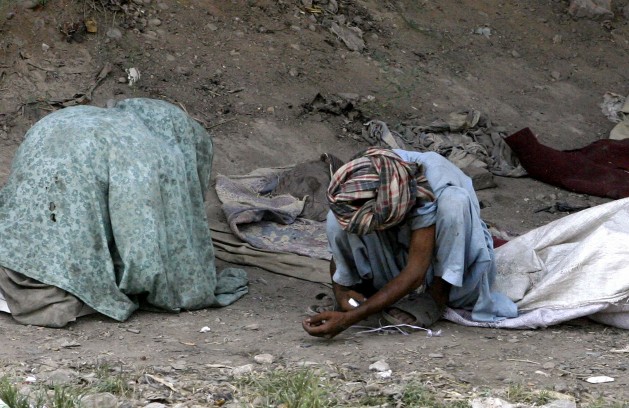 An addict injecting heroin on the outskirts of Peshawar. Credit: Ashfaq Yusufzai/IPS.

PESHAWAR, Mar 22 2014 (IPS) - Pakistan may have low prevalence of HIV/AIDS, with only about 9,000 officially confirmed cases, but the country is at high risk, particularly due to a growing number of injecting drug users (IDUs), say experts.

Of the country’s 180 million people, 420,000 are IDUs according to the Drug Use in Pakistan survey conducted last year.

“IDUs contract HIV by sharing infected syringes. We are afraid that HIV/AIDS can spread to the general population through them,” Syed Mohammad Javid, manager of the National AIDS Control Programme (NACP) told IPS.

He said the easy availability of heroin from nearby Afghanistan, where large swathes of land are under poppy cultivation, has become a pressing problem for Pakistani cities. Peshawar, capital of the northern Khyber Pakhtunkhwa province, is one such place.

“Twenty percent of IDUs have tested positive for HIV/AIDS in Peshawar, which is alarming,” he said, citing a study conducted by the Canadian International Development Agency (CIDA) in collaboration with the NACP in 2010.

A similar study in 2008 had put the figure at 13 percent, Javid said, pointing out that HIV/AIDS prevalence is increasing.

He said Pakistan has officially declared 9,000 confirmed cases of HIV/AIDS. But the World Health Organisation (WHO) estimates that the actual number could well be more than 100,000.

Javid said in 2010 the World Bank had stopped funding free services for HIV infected drug addicts as the money had to be diverted for use in flood-hit areas. This compounded the problem, he said.

Dr Abdul Hameed, a WHO medical officer, is deeply concerned over the sharp rise in HIV/AIDS cases among IDUs because there is no official detoxification and rehabilitation programme in the country.

Hameed said the health department and donor agencies used to believe earlier that HIV/AIDS had no local source in Pakistan, and blamed an HIV positive immigrant population deported from the United Arab Emirates and other countries.

“A WHO study has proved that the infection has potential local source, namely IDUs, which warrants administrative support to addicts at antiretroviral therapy (ART) centres,” Hameed said.

Pakistan has set up 13 ART centres in collaboration with the WHO where around 5,000 patients have received treatment so far.

Oussama Tawil, UNAIDS country coordinator for Pakistan and Afghanistan, told IPS that a high incidence of HIV/AIDS among IDUs in Peshawar had alarmed UN agencies.

“The number of IDUs who share syringes has increased from 500 to 1,800 in the city over the last three years,” he said. The situation is also dismal in other Pakistani cities such as Karachi, Faisalabad, Sukkur, Larkana, Lahore and Rawalpindi, he said.

NGOs have also been tasked with implementing the UN’s needle exchange programme under which IDUs will be given sterilised needles to end the use of contaminated ones and prevent the human immunodeficiency virus (HIV) from spreading, he said.

This is a pilot programme for Peshawar and will be launched in other cities later.

After detoxification, the IDUs will be counselled and tested at ART centres so that they don’t go back to narcotics, Tawil said.

The 2013 survey, Drug Use in Pakistan, jointly conducted by the Narcotics Control Division, Pakistan Bureau of Statistics and UN Office on Drug and Crime (UNODC), shows that around 4.25 million people in the country are drug dependent.

Mian Zulqernain Amir, joint secretary of the Narcotics Control Division, told IPS that in the last 12 months only 30,000 adult drug users had access to treatment, mostly at private centres run by NGOs.

“However, we now have baseline information on the prevalence and pattern of drug use among the population and we are taking steps, in collaboration with the UN and NGOs,” he said.

The survey on Drug Use in Pakistan showed that cannabis was the most commonly used drug in Pakistan, with four million people listed as users. Opium and heroin were used by about one percent of drugs users. The highest levels of heroin use was seen in provinces bordering poppy cultivating areas in Afghanistan.