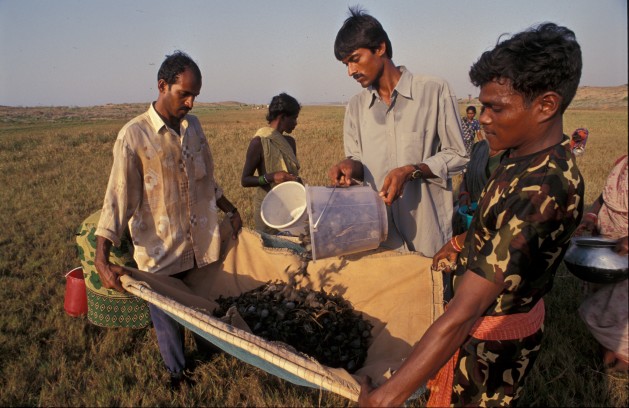 GANJAM, India, Mar 27 2014 (IPS) - When Olive Ridley sea turtles nest on the beach in his village, little Warthy Raju can barely wait for the millions of hatchlings, with their three-inch shells and thumb-sized heads, to scramble out.

Instead of heading for the sea, many disoriented baby turtles move landwards. Raju, all of 12 years old, plays knight in shining armour, snatching them away from the clutches of death in bucketfuls – at least 30 buckets each day – and gently pours them into the receding waves.

Despite cheek-by-jowl proximity with over 6,000 people in three fishing villages, the 4.5-kilometre-long Rushikulya river mouth rookery in eastern India’s Odisha state has become a steady favourite of the nesting Ridley.

Despite their own livelihoods being at stake, local communities still favour turtle conservation.

Rushikulya hosted about 300,000 of the total 694,000 Olive Ridley turtles that nested in Odisha in 2013. In February this year, though nesting unexpectedly halted after just two days, 25,000 turtles nested here and none at the other two rookeries in the state.

Community conservation efforts are being credited for the increasing mass nesting at Rushikulya.

“Community presence, instead of becoming a major deterrent, has emerged as the Ridley’s strongest support over the last 10 years,” Mangaraj Panda of the United Artists’ Association, which is involved in community conservation efforts, told IPS.

India’s eastern coastal state of Odisha each year hosts nearly half of the world’s and 90 percent of India’s nesting Olive Ridley turtles, categorised as “endangered” by the International Union for Conservation of Nature (IUCN).

The only other major mass nesting beaches in the world are in Pacific Mexico and Costa Rica.

In Odisha, the Ridley nests in three major groups off the Indian Ocean – on the Rushikulya, Gahirmatha and Devi coasts. The last two are inside protected wildlife sanctuaries.

Over six nights in mid-February, thousands of the reptilians, two feet long, weighing 50 kg, crowd ashore to dig their earthen-pot shaped nests, laying 110 to 180 eggs each.

Mesh nettings are embedded along 2.3 km to protect the hatchlings from straying landward as they are disoriented by illumination.

The IUCN indicates a globally declining population trend for the Olive Ridley due to trawl fishing, destruction of habitat and global warming. However, India’s environment and forests ministry reports no such decline.

Since 2004, the Odisha government’s annual fishing ban from November to May to protect the Olive Ridley has reduced their incidental mortality by half. This ban is for traditional fishermen as well as trawlers.

“Even today, late in the night, the sea in the no-fishing zone looks like a mini township; trawlers are on business as usual,” Panda said.

Bivash Pandav, acknowledged as a global authority on Odisha’s Olive Ridley and a senior researcher at the Wildlife Institute of India, the environment ministry’s key conservation advisory institute, told IPS: “That Rushikulya hosts an extremely large number of turtles does not mean all is well here.”

Discontent has been simmering among fishermen ever since the seven-month ban was imposed.

“This remains a most tangled issue confronting fishermen and the state fisheries administration,” a key fisheries official told IPS, requesting anonymity. In early January, coastguards shot dead a fisherman who was flouting the ban.

In Podampeta, the richest of rookery villages, fisherman Babaji Ramaya told IPS, “Our kitchen fires don’t burn if we do not go fishing. The sea is our farmland and the fish our grain; what will our children eat?”

Fishing families have up to three men each earning 200 dollars a month. Women earn 100 dollars preparing and selling dried fish.

While they have traditionally used wooden boats and nets that do not harm the turtles, with fierce competition from trawlers and a growing fishing population, they are increasingly switching to motor boats with propellers and advanced fishing gear. Besides, many do not observe the ban.

“All we request them to do is not use nets for 15 days annually – when gravid females come near the shore, nest and depart, and again when millions of hatchlings are outbound,” said Michael Peters, who heads WWF-Odisha.

Many admit that traditional methods of fishing do not harm the Olive Ridley. “The fishing ban should explicitly be for trawling, mechanised gill netting and long lining,” Pandav told IPS.

Despite their own livelihoods being at stake, local communities still favour turtle conservation.

The Odisha government has tentatively explored the area’s ecotourism potential, webcasting Rushikulya’s nesting this year. But conservationists believe this could pose another threat.