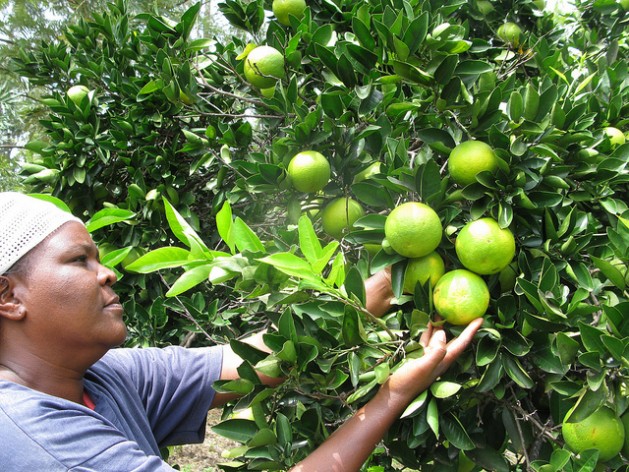 Judith Mwikali Musau has successfully introduced the use of grafted plants for crop and fruit harvesting. IFAD says it is clear that a new revolution in agriculture is needed to transform the sector. Credit:Isaiah Esipisu/IPS

ROME, Apr 16 2014 (IPS) - The Millennium Development Goals deadline of 2015 is fast approaching, but according to the International Fund for Agricultural Development (IFAD), poverty still afflicts one in seven people — and one in eight still goes to bed hungry.

Together with the United Nations Food and Agriculture Organisation (FAO) and the World Food Programme (WFP), IFAD unveiled the results of their joint work Apr. 3 to develop five targets to be incorporated in the post-2015 development agenda.

"We have a growing global population and a deteriorating natural resource base." -- Kanayo F. Nwanze, president of IFAD

These targets include access to adequate food all year round for all people; ending malnutrition in all its forms with special attention to stunting; making all food production systems more productive, sustainable, resilient and efficient; securing access for all small food producers, especially women, to inputs, knowledge and resources to increase their productivity; and more efficient post-production food systems that reduce the global rate of food loss and waste by 50 percent.

IPS correspondent Silvia Giannelli interviewed Kanayo F. Nwanze, president of IFAD, on the role of rural poverty and food security in shaping the current debate on the definition of a new development agenda.

Q: Do you think it is time to rethink the strategies to achieve the Millennium Development Goals?

A: It’s not only that I think, I know it. And that is why we have Sustainable Development Goals (SDGs) that are being fashioned. The SDGs are an idea that was born in the Rio Conference on Sustainable Development in 2012. The crafting of a new global development agenda is a unique opportunity to refocus policy, investments and partnerships on inclusive and sustainable rural transformation.

The intent is to produce a new, more inclusive and more sustainable set of global development objectives that have application to all countries. These goals – once agreed by governments – would take effect after the current MDGs expire in 2015.

And measurement will be crucial if we are to achieve what we set out. This is why we are talking about universality but in a local context. The SDGs will be for all countries, developing and developed alike. But their application will need to respond to the reality on the ground, which will vary from country to country.

Q: How do the five targets revealed this month fit in this discussion on the post-2015 development goals?

A: The proposed targets and indicators are intended to provide governments with an informed tool that they use when discussing the precise nature and make-up of the SDGs related to sustainable agriculture, food security and nutrition.

These are five critical issues for a universal, transformative agenda that is ambitious but also realistic and adaptable to different country and regional contexts. The targets can fit under a possible dedicated goal but also under other goals. So, it is for governments to decide whether or not they wish to include these targets in the SDGs. 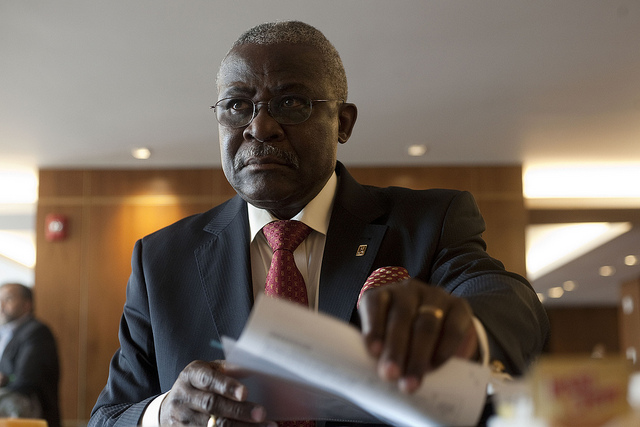 Kanayo F. Nwanze, president of IFAD, says it is clear that a new revolution in agriculture is needed to transform the sector so it can fully live up to its potential to drive sustainable development. Credit: Juan Manuel Barrero/IPS

Q: Why does agriculture represent such a critical aspect within the post-2015 development agenda?

A: We have a growing global population and a deteriorating natural resource base, which means more people to feed with less water and farmland. And climate change threatens to alter the whole geography of agriculture and food systems on a global scale.

It is clear that we need a new revolution in agriculture, to transform the sector so it can fully live up to its potential to drive sustainable development. Target areas should address universal and context-specific challenges, but context-adapted approaches and agendas are the building blocks for any effort to feed the world.

Q: Why is the focus on rural areas so important in order to overcome inequality?

A: The world is becoming increasingly urban, yet cities are still fed by the people working the land in rural areas. And it is in those rural areas where 76 percent of the world’s poor live.

At IFAD we see that the gap between rich and poor is primarily a gap between urban and rural. Those who migrate to urban areas, oftentimes do so in the belief that life will be better in the urban cities.

However they get caught up in the bulging slums of cities, they lose their social cohesion which is provided by rural communities and they go into slums, they become nothing but breeding ground for social turmoil and desperation. One only has to look at what is happening today in what was described as the ‘Arab spring’.

Q: But beyond the issue of exclusion and turmoil, why is key to addressing rural poverty?

A: Because the rural space is basically where the food is produced: in the developing world 80 percent in some cases 90 percent of all food that is consumed domestically is produced in rural areas.

Food agriculture does not grow in cities, it grows in rural areas, and the livelihoods of the majority of the rural population provide not only food, it provides employment, it provides economic empowerment,[…] and social cohesion.

Essentially, if we do not invest in rural areas through agricultural development we are dismantling the foundations for national security, not just only food security. And that translates into not just national security but also global security and global peace.

Q: What risks are we facing in terms of global security, if we don’t face and take concrete action to ensure food security?

A: We just need to go back to what happened in 2007 and 2008: the global food price crisis, as it is said, and how circumstances culminated in what happened in 40 countries around the world where there were food riots.

Those riots were the results of inaction that occurred in some 25-30 years due to these investments in agriculture and the imbalances in trade, across countries and across continents. Forty countries experienced serious problems with food riots, and they brought down two governments, one in Haiti and another one in Madagascar. […] We’ve seen it, [and] it continues to repeat itself.

Q: What role are developed countries expected to play in the achievement of these five targets?

A: All countries will have an essential role to play in achieving the SDGs – whatever they end up looking like. Countries have agreed that this is a “universal” agenda and developed countries’ commitment will have to extend beyond ODA [Official Development Assistance] alone.

At IFAD we [are] seeing that development is moving beyond aid to achieve self-sustaining, private sector-led inclusive growth and development. For example, in Africa, generated revenue shot up from 141 billion dollars in 2002 to 520 billion dollars in 2011. This is truly a universal challenge, but it also requires local and country-level ownership and international collaboration at all levels.