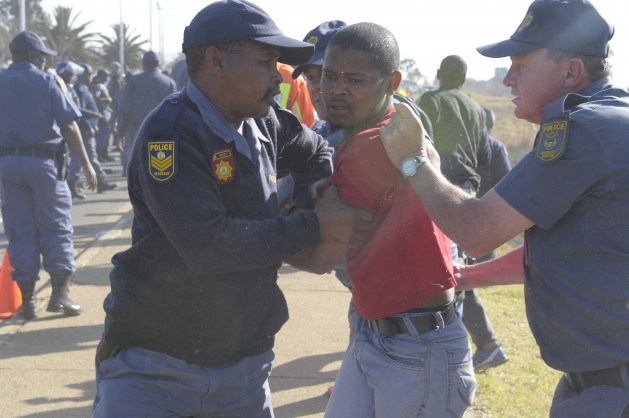 SYDNEY, Apr 30 2014 (IPS) - The global spectre of state violence against political dissent, with paramilitary law enforcement units advancing against citizens they are employed to protect in cities such as Cairo, Bangkok and Kiev is daily news. But in some developing countries, the police are being used to put down indigenous opposition to the alliance of state and corporate power over resource extraction.

Indigenous peoples around the world confront dispossession for the extractive industry. When formal avenues to resolve grievances with authorities fail, activism is often met with disproportionate force, unlawful detention and the criminalisation of protest leaders. And perpetrators of state violence invariably enjoy impunity.

Mandeep Tiwana of the CIVICUS World Alliance for Citizen Participation based in Johannesburg, tells IPS that the ultimate casualty is peoples’ faith in representative government.

“Failure by the state to hold security forces and other powerful state and non-state entities to account for infringement of democratic freedoms and the right to express legitimate dissent undermines democracy severely,” he says.

The police shooting of 34 striking miners at the Britain-headquartered Lonmin’s platinum mine in Marikana in South Africa in 2012 is seen by many as a watershed moment in contemporary state and corporate brutality.

The police confronted communities rallying in May 2012 against environmental damage and lack of benefits from the Tintaya copper mine in Espinar Province, Peru, owned by Swiss company Xstrata, with two fatalities. Workers Day on May 1 is a reminder of the oppression indigenous people and workers still face around the world.

In the Pacific region, mineral and gas extraction dominated by multinationals has long been protected by mobile police squads. Such action has come often in Papua New Guinea (PNG), where 28 percent of people live below the poverty line.

In recent years, police have been responsible for violent community evictions near the Porgera gold mine in Enga Province, majority owned by Canadian company Barrick Gold, and the fatal killing of a worker who expressed opposition to the PNG LNG (Liquified Natural Gas) project in the highlands.

South Africa, says David van Wyk of the Bench Marks Foundation, “has seen increasing strikes and service delivery protests, many in mine impacted communities.” When authorities fail to address grievances, the issues are left to the police, “which has led to increased police brutality,” he tells IPS.

But in suppressing local opposition, developing nations also act in the neo-liberal interests of multinationals and foreign stakeholders. At Marikana, state violence in the name of security allowed Lonmin to remain removed from direct responsibility for human rights abuses.

In Nigeria 50 years of oil exploitation in the Niger Delta by companies, including Shell and Chevron Texaco, in alliance with the state has enriched foreign and local elites. Government oil revenues are in excess of 350 billion dollars – while 69 percent of the local Ogoni and Ijaw people live in poverty.

In PNG, mobile police squads have received funding for decades from the Australian government, which has stakes in extractive projects such as the Exxon Mobil joint venture, PNG LNG.

“It would dry up the opportunity structure exploited by a swathe of foreign investors who ignore national laws and local custom, and come as a shock to national businessmen who have proven effective in illegal land grabs and corrupt resource transactions.”

Barrick Gold and Esso Highlands have agreements to provide support to police units in the form of vehicles, accommodation, food and fuel. Clauses indicating that support is conditional on state agencies complying with international standards of conduct are rarely enforced.

Companies “adopt a ‘hear no evil and see no evil’ policy when it comes to state violence,” says Lasslett.

The post-9/11 era has also seen increased use of anti-terrorism measures to deal with grievances. The Guatemalan government used the threat of terrorism to declare a ‘state of siege’ in May last year following demonstrations against the Escobal silver mine in the nation’s southeast. This paved the way for suspending civil liberties and introducing martial law.

Justice for the marginalised is a massive challenge in an era of rising illegitimate power, as described in this year’s State of Power report from the Transnational Institute (TNI). It claims that pervasive corporate influence over governments is a factor in the demise of accountability to the governed, even in democratic nations.

“Corporations, through trade and investment agreements, lobbying and corporate capture of political institutions have also weaved a web of impunity that protects their profits and accountability for human rights and environmental abuses,” TNI researcher Lyda Fernanda tells IPS.

“The law favours those with large reserves of money and those who have the capacity and connections to buttress their claims with forms of evidence that courts accept,” says Lasslett. “This is not to say communities can’t win in the courts, but it is not a terrain on which they hold the advantage.”

He believes that when impunity is supported by corruption and inadequate police complaints procedures, powerful social movements may be the most effective way to defend rights.

“The greatest weapon they [indigenous peoples] have is their own history, culture and customary bonds.”