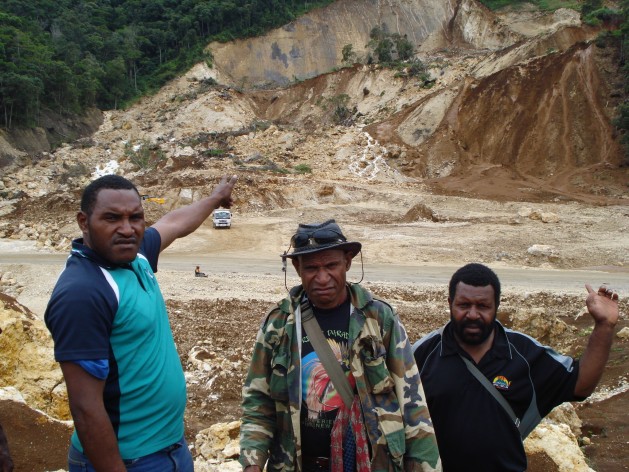 Villagers in Papua New Guinea point to their village destroyed in a landslide from a quarry being excavated for a liquefied natural gas project. Credit: Catherine Wilson/IPS.

SYDNEY, Feb 22 2014 (IPS) - Natural reserves such as gold, copper, nickel, gas and timber are being extracted in the western Pacific island states of Papua New Guinea and Solomon Islands to feed the soaring economies of East and South East Asia. But despite these Pacific nations recording economic growth rates of 6-11 percent over the past seven years, opportunities for human development have not been grasped.

“There is very little confidence amongst communities in resource extraction projects that governments are operating,” Maureen Penjueli, co-ordinator of the civil society organisation, the Pacific Network on Globalisation in Fiji, told IPS.

"Customary landowners and civil society groups have not been adequately consulted on the type of development that is appropriate for the Pacific.”

“There is a perception that governments are pro-big business, pro-foreign investment and have paid very little attention to the plight of their own people. Customary landowners and civil society groups have not been adequately consulted on the type of development that is appropriate for the Pacific.”

In Papua New Guinea (PNG) there are at least six mines extracting gold and copper. The nation’s largest resource project, PNG LNG (Liquefied Natural Gas), centred in the highlands is expected to begin supply this year, while generating up to 1.5 billion dollars of annual government revenue for the next 30 years.

The Solomon Islands, an archipelago to the northeast of Australia, has a 50-year history of timber exploitation. Logging currently contributes to 15 percent of state and 60 percent of export revenues.

Natural resource management has brought the interests of corporate developers determined by short-term profit competing with local Melanesian perspectives that prioritise culture, identity and the well-being of future generations.

The PNG government claims a state right to mineral resources, while in the Solomon Islands traditional landowners determine timber extraction. Either way ordinary citizens have experienced no benefits.

Two million in a population of more than seven million in PNG live in poverty, while the under-five mortality rate is a high 75 per 1,000 births. In the Solomon Islands 23 percent of people live below the poverty line, and literacy is 17 percent.

Pacific island governments with shortfalls in capacity and expertise can be disadvantaged in negotiating resource agreements with international investors. An unhealthy alliance between the political elite and foreign companies has served the interests of a few, while negatively impacting the rural majority who suffer inadequate public services and human rights protection.

In the Solomon Islands an influx of Southeast Asian logging companies in the 1980s paralleled escalating corruption and declining regulatory compliance.

“The links between politicians and foreign logging companies are complex and well-entrenched,” a Transparency International spokesperson told IPS in the Solomon Islands  capital, Honiara. “We regularly hear of politicians using their power to protect loggers, influence police and give tax exemptions to foreign businesses; in return loggers fund politicians.”

Solomon Islands landowner Lily Duri Dani said that corruption had resulted in women resource owners being “pushed aside” in decisions about land use.

“Women would make decisions that are honest, open and fair to everybody. We would use the [resource] money to help people at the grassroots,” she declared.

According to Human Rights Watch (HRW), “poor governance and corruption [in PNG] prevent ordinary citizens from benefitting from resource wealth….large-scale extractive projects have generated environmental and human rights concerns that the government has failed to address.”

The PNG LNG project is set to deliver a windfall to foreign investors that hold 80 percent ownership, including Exxon Mobil and its subsidiary, Esso Highlands.

In 2012, a devastating landslide from a quarry being excavated by a project sub-contractor buried two villages, Tumbi and Tumbiago, killing an estimated 60 people and destroying 42 homes. Safety concerns about quarry operations had been identified by an independent environmental consultant, D’Appolonia, the previous year. The PNG Government has failed to commission an independent investigation into the disaster, leaving victims deprived of justice.

Tumbi village chief Jokoya Piwako, who lost his entire family in the tragedy, claimed that the government and the companies “are concerned about their income and revenue, but they are not concerned about lives in the communities.”

Non-governmental organisation Jubilee Australia reported last year that “there are serious risks that the revenues generated by the [PNG LNG] project will not mitigate the negative economic and social impacts.”

The Porgera gold mine, located in Enga Province and majority owned by the Canadian company Barrick Gold, has produced 20 billion dollars worth of gold in the past 20 years. Communities in the area live in severe poverty while HRW has reported gang rapes committed at the mine site by private security personnel in 2011.

Last year the United Nations Development Programme (UNDP) organised a Pacific conference in Fiji to tackle the question of how natural resource exploitation could translate into improving the lives of ordinary citizens. But the necessary framework of good transparent governance, strong extractive industry regulation, environmental and social protection measures and participation by rural communities in decisions about resource use is yet to emerge in the region.

Penjueli advocates that “a key role for civil society organisations is to mobilise the public to engage with difficult questions of human rights and social justice” in the extractive sector.

Indigenous communities need to be empowered with skills, knowledge about the implications of decisions and alternative livelihoods, and better access to legal support to defend their rights, activists say.

“We have to educate all the landowners because they have to make good decisions,” Judy Tabiru, president of the Isabel Provincial Council of Women in the Solomon Islands, told IPS. “We must create rules to protect our resources for the benefit of our people. That is for the betterment of our generation and that of our children’s children.”