This is the second installment of a two-part series examining the use of ‘lawfare’ on Muslim citizens accused of terror-related activity. 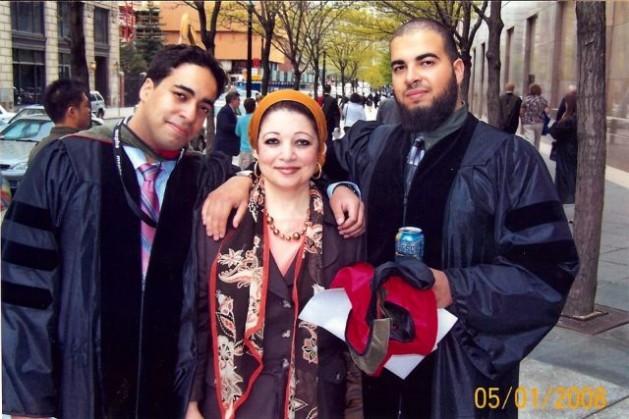 Tarek Mehanna (right) poses for a photograph with his mother and brother at his PhD ceremony. Photo courtesy the Mehanne family.

NEW YORK, Apr 18 2014 (IPS) - Such stigma now surrounds the word ‘terrorist’ that most recoil from it, or anyone associated with it, as though from a thing contagious; as though, by simple association, one could land in that black hole where civil liberties are suspended in the name of national security.

For many Muslim citizens of the United States, such ostracism has become a matter of routine, forcing family members of terror suspects to double up as legal advocates and political supporters for their brothers, husbands and sons.

“We are a very tight-knit family, and this has been hell for us." -- Tamer Mehanna

A budding nationwide movement to shed light on rights abuses in domestic terror cases is straining to turn that tide. One of its primary sites of congregation is the patch of concrete outside the New York Metropolitan Correction Center (MCC), where suspects deemed violent are held incommunicado.

But the families that gather at the monthly vigils held there, sponsored by a growing coalition known as the No Separate Justice Campaign, speak of a different side to the story: one that involves the government abusing post-9/11 laws to round up non-violent, law-abiding Muslims for exercising their rights to free speech and religion.

At a Mar. 10 vigil outside the MCC, IPS spoke with Tamer Mehanna, brother of Tarek Mehanna, a Pittsburgh-born pharmacist who is serving out a 17-year sentence in Terra Haute, Indiana.

Prior to his conviction on several counts including material support for terrorism, Tarek spent two years in 23-hour isolation, the MCC in New York being just one of the locations where he was all but prevented from communicating with the outside world.

Tamer recounted how, between 2004 and 2008, the FBI courted his brother, using everything from polite requests to psychological intimidation to convince him to become an informant. When all failed, Tarek was arrested at an airport in New York City on his way to Saudi Arabia.

Experts say the case against Tarek Mehanna represents one of the most salient examples of prosecution for thought crimes in U.S. legal history.

Initially arrested for having allegedly given false testimony to an FBI official, Tarek was released on bail, then arrested a second time on charges of conspiring to shoot up a shopping mall, though no evidence for this allegation was ever offered in court.

Over the course of 35 days, the prosecution proceeded to build a case against Tarek based on records of online chats, his translation of an ancient Arabic text entitled ’39 Ways to Serve and Participate in Jihad’ and his plans to take up a pharmaceutical position at a prestigious hospital in Saudi Arabia.

Tarek’s brother Tamer Mehnna told IPS that the prosecution never once referred to a specific action that could be construed as providing material support to terrorism. It appeared he was on the stand for nothing more than reading and knowledge sharing among the Muslim community of Worcester, Massachusetts.

Andrew March, a Yale professor who was summoned as an expert witness for the defense, summed up the trial succinctly when he said: “As a political scientist specializing in Islamic law and war, I frequently read, store, share and translate texts and videos by jihadi groups. As a political philosopher, I debate the ethics of killing. As a citizen, I express views, thoughts and emotions about killing to other citizens...At Mr. Mehanna’s trial, I saw how those same actions can constitute federal crimes.”

In addition to shelling out 1.3 million dollars in bail, Tarek’s family was shunned by their community in Massachusetts, spent endless hours in court and even gave up their jobs in order to advocate on his behalf.

“We are a very tight-knit family, and this has been hell for us,” Tamer told IPS. “When my brother was arrested, my mother had to watch her son, a respectable guy, being thrown on the ground and handcuffed like an animal in front of crowds of spectators – it was deeply traumatic.

“The second time he was arrested she was stronger, but it was my father’s turn to break down. Before this happened, I never even saw my father shed a tear,” he added. “But this just crushed him. He fell into a depression, into hopelessness, even lashed out at us for advocating on Tarek’s behalf.”

In their firm belief in Tarek’s innocence, the Mehanna family is not alone. An upcoming study co-authored by members of the National Coalition to Protect Civil Freedoms (NCPCF) and Project SALAM (Support And Legal Advocacy for Muslims) documents hundreds of cases of Muslims imprisoned on terror-related charges despite a lack of evidence linking them with any tangible crime.

“They share commonalities,” he said, “of being made to feel unwelcome at their mosques, losing their jobs, having people slip into depression. These outcomes are entirely predictable, but to have them deliberately inflicted on you by your own government is kind of shocking.”

Bi-annual conferences hosted by NCPCF attract 30 or 40 family members, who Downs says cherish the opportunity to come together and be heard, as respectable citizens with genuine grievances.

“They get to talk to the few people in the world who understand what they’re going through,” he said, “because if you haven’t experienced it, you just don’t get it.”

Family members speaking to IPS on condition of anonymity said their isolation from the community is nothing compared to the extreme forms of solitary confinement imposed on their loved ones, most of whom are housed in what the Federal Bureau of Prisons (BoP) calls Communication Management Units (CMUs).

According to Alexis Agathocleous, a senior staff attorney at the Center for Constitutional Rights (CCR), CMUs came quietly into existence during the George W. Bush administration, the first in Terre Haute, Indiana in 2006 and the second in Marion, Illinois in 2008.

“These units are quite unparalleled within the federal prison system,” Agathocleous told IPS. “They segregate prisoners from the rest of the population and impose very strict restrictions on prisoners’ ability to communicate with the outside world – this translates to drastically reduced access to social telephone calls and visits, and when visits do occur they are strictly non-contact.”

Of the roughly 80 prisoners held in CMUs, Agathocleous estimates that between 66 and 72 percent are Muslims, despite the fact that Muslims make up just six percent of the federal prison population.

He referred to this significant over-representation as “troubling”, adding, “There seems to be the use of religious profiling to select prisoners for CMU designation.”

Speaking at a rain-soaked vigil outside the MCC in early April, Andy Stepanian – an animal rights activist who spent six months in the CMU at Marion – said the Muslim men he met there were “exceptionally generous and caring.”

“There has not been a single night in the four and a half years since I’ve gotten out that I’ve not either had a nightmare or stayed up for hours wondering, ‘Why was I the lucky one who got out? Is it just because of the pigment of my skin?’” Stepanian said.

In 2010 CCR filed litigation representing several inmates housed in CMUs, challenging both the arbitrary and seemingly retaliatory nature of the designation, which is made worse by the fact that the BoP offers “no meaningful process through which [prisoners] can earn their way out – no hearing, no discernible limit on the amount of time someone can spend in a CMU and no meaningful criteria that a prisoner can work at in order to [gain] their release,” Agathocleous said.

Those fortunate enough to afford the monthly trips out to Indiana and Illinois have recorded their testimony of these tightly controlled visits, painful on both sides of the Plexiglas screens that separate loved ones.

At a recent NCPCF conference, Majida Salem, wife of Ghassan Elashi, recounted how her 12-year-old Down’s syndrome child refused to enter the visitation room at Marion.

“He cried and said, ‘It’s an ugly visit. Baba no touch… it’s bad,’” Salem said. “To me this is so merciless, keeping a man who did nothing but feed widows and orphans locked up in a CMU… for 65 years.”