This is the first of a two-part series examining the use of ‘lawfare’ on Muslim citizens in the United States accused of terror-related activity. 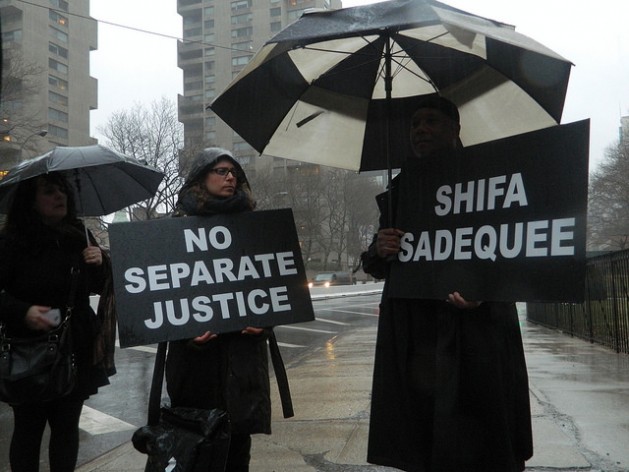 NEW YORK, Apr 17 2014 (IPS) - The sun is just setting as the group huddles closer together, their faces barely visible in the gathering dusk. Simple, hand-made signs read: ‘Stand for Justice’.

Above them, the fortified concrete tower of the Metropolitan Correctional Centre (MCC) of New York City rises into the darkening sky, fluorescent lights inside illuminating sturdy steel bars that cling to every window.

"There are things happening in their cases that are not happening in others, like the use of anonymous juries and secret evidence files." -- Sally Eberhardt

The vigil has drawn a mixed bag of supporters – some have their heads covered, a few are modestly concealed by hijabs, others are simply attired in jeans and T-shirts. Whatever their dress, they have gathered here for one reason – to protest the use of ‘lawfare’ on Muslim citizens accused of terror-related activity.

Sally Eberhardt, a researcher with Educators for Civil Liberties, tells IPS these monthly vigils began in 2009 to highlight legal irregularities in the case against Fahad Hashmi, a Pakistan-born U.S. citizen who was arrested at London’s Heathrow Airport in 2005 and became the first citizen to be extradited to the U.S. under new laws passed after 9/11.

Hashmi spent three years in solitary confinement at the MCC before ever being charged with a crime. He accepted a government plea bargain of one-count of conspiracy to provide material support to terrorist groups and, in 2010, began a 15-year sentence at the federal “supermax” prison in Florence, Colorado.

Weekly vigils held in the autumn of 2009 through Hashmi’s sentencing gradually attracted civil liberties groups, including Amnesty International, the Council on Arab-Islamic Relations and the Centre for Constitutional Rights (CCR), along with family members of other incarcerated Muslims, who have now coalesced into a movement known as the No Separate Justice (NSJ) campaign.

Volunteers with independent advocacy organisations working on behalf of Muslim prisoners define preemptive prosecution – which is also known as preventive, predatory, pretextual or manufactured prosecution – as a post 9-11 strategy to target individuals or groups whose ideologies and religious practices raise ‘red flags’ for the government.

According to an upcoming study based on the Department of Justice’s 2008 list of domestic terrorists, the charges used to hound “suspects” are generally manufactured by the government, and can take many forms:

• Using material support for terrorism laws to criminalise activities that are not otherwise considered criminal, such as free speech, free association, charity, peace-making and social hospitality;

• Using conspiracy laws to treat friendships and organisations as criminal conspiracies, and their members as guilty by association, even when most members of the group have not been involved in criminal activity and may not even be aware of it.

• Using agents provocateurs to actively entrap targets in criminal plots manufactured and controlled by the government.

• Using minor “technical” crimes, which otherwise would not have been prosecuted or even discovered, in order to incarcerate individuals for their ideology (for example, making a minor error on an immigration form, which is technically a crime; lying to government officials about minor matters; gun possession based on a prior felony many years earlier; minor tax and business finance matters).”

“NSJ was an attempt to bring four key issues under one umbrella: surveillance and entrapment; conditions of confinement; fair trial and due process concerns; and free speech and material support charges,” Eberhardt told IPS.

“We feel that when it comes to Muslim terror suspects, the federal government applies a separate level of justice: there are things happening in their cases that are not happening in others, like the use of anonymous juries and secret evidence files that they have no access to.”

Muslim prisoners and pre-trial detainees are also subject to Special Administrative Measures (SAMs), a Bill Clinton-era process designed to isolate potentially violent persons by severely restricting their ability to communicate with the outside world.

In 1996 SAMs were applied for a maximum of four months. Now, they can be designated for up to a year, and extended indefinitely at the discretion of the attorney general, a provision families say violate international laws on solitary confinement.

“SAMs are some of the worst things a human could be forced to endure,” Eberhadt said. “In Hashmi’s case, for example, he was only allowed to write letters on three pieces of paper, he could only receive news 30 days after it was published and could barely communicate with his family or lawyers.”

NSJ has red-flagged close to 20 cases of Muslim terror suspects, whose arrests, trials, sentencing and detention are at odds with constitutionally-protected rights of free speech, freedom of assembly and religious freedom.

Among those spotlighted are Ghassan Elashi, a Palestinian activist whose brainchild, the Holy Land Foundation for Relief and Development, earned him a 65-year sentence for material support charges in 2009; Houston-born Ahmed Abu Ali, who was tortured for years in a Saudi prison before being handed a life sentence on nine terrorism counts; and the Duka Brothers, three New Jersey men sentenced to life following a costly FBI entrapment operation that is better known as the case of the Fort Dix Five.

‘Lawfare’: Use and abuse of ‘War on Terror’ tactics

Legal experts say the handful of individuals who have received media attention are just the tip of the iceberg of a vast operation to round up Muslims on fabricated or flimsy ‘terrorism’ charges in the name of national security.

Kathleen Manley, legal director of the advocacy group that calls itself the National Coalition to Protect Civil Freedoms (NCPCF), says the rise of ‘preemptive prosecutions’ as a weapon in the United States’ War on Terror arsenal is a dangerous development that enables law enforcers to hound anyone whose “beliefs, ideology, or religious affiliations raise security concerns for the government”, without any evidence of an actual crime.

In 2008 the Department of Justice (DOJ) made public a docket containing the names of nearly 400 ‘domestic terror suspects’ – most of them Muslims – compiled in the decade immediately following the bombing of the World Trade Center.

According to Manley, a good “72 or 73 percent of those cases were pure preemptive prosecution, where the defendants hadn’t done anything that could be considered a crime”, but had instead been targeted for their beliefs, religious practices or fears of what they “might” do.

“Another 20 percent of the cases,” she said, “had what we call elements of pre-emptive prosecution, with the accused committing a very minor crime, such as credit card fraud.”

The DOJ’s list is now the subject of a major study, the first of its kind, on domestic terror suspects and the use of laws implemented after Sep. 11, 2001 to prevent terrorist attacks.

Undertaken by volunteers from the NCPCF and Project SALAM (Support and Legal Advocacy for Muslims), the study, which will be published this summer, concludes that the “government has used preemptive prosecution to exaggerate the threat of Muslim extremism to the security of the country.”

As the sun finally slipped out of sight behind the wall of federal buildings, several people lit candles and held them up towards the windows of the MCC.

“We’ve come here to shine a light on injustice,” a family member speaking under condition of anonymity told IPS. “It’s only a flickering light now, but it will get stronger.”