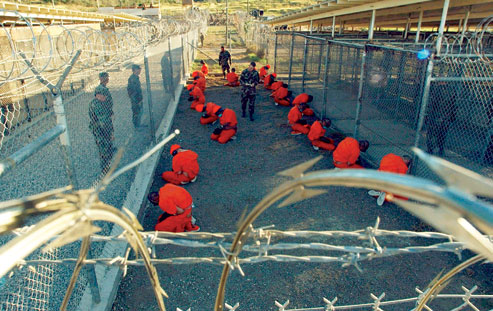 WASHINGTON, Jul 9 2013 (IPS) - A federal judge here has taken the unusual step of formally calling on President Barack Obama to halt the forcible feeding of dozens of hunger-striking detainees at the Guantanamo Bay Naval Base in Cuba, warning that the practice appears to contravene international law.

But District Court Judge Gladys Kessler said the court system lacks jurisdiction to stop the force-feedings, which have been ongoing since February and currently affect around 45 inmates twice a day. The case had been brought on an emergency basis on behalf of a Syrian detainee, Abu Wa’el Dhiab, who wanted the force-feedings to be stopped for Ramadan.

[Obama] has the power to address the hunger strike – he could end it tomorrow by starting to free prisoners his own government has cleared for release.” -- Cori Crider of Reprieve

During the month of Ramadan, which started Tuesday in much of the world, most practicing Muslims are required to fast during the daytime. Three similar motions by other detainees are still pending.

“It is important to stress that this is an issue now of life and death: people are being force-fed and their lives are on the line,” Jamil Dakwar, director of the Human Rights Program at the American Civil Liberties Union (ACLU), a watchdog and legal advocacy group, told IPS.

On Monday, Judge Kessler noted that the courts are legally barred from considering the conditions of detention of anyone the United States has “properly detained as an enemy combatant”.

In May, more than a dozen human rights groups wrote to U.S. Defence Secretary Chuck Hagel, requesting that he “order the immediate and permanent cessation of all force-feeding of Guantanamo prisoners … capable of forming a rational judgment as to the consequences of refusing food.”

Judge Kessler also outlined a forceful legal and ethical case for why the president should intervene.

“[The] Petitioner has set out in great detail … what appears to be a consensus that force-feeding of prisoners violates Article 7 of the International Covenant on Civil and Political Rights, which prohibits torture or cruel, inhumane, and degrading treatment,” Judge Kessler noted, referencing an argument the United Nations and others have made.

“[I]t is perfectly clear … that force-feeding is a painful, humiliating, and degrading process.”

Also on Monday, the U.S. musician and activist Yasiim Bey (formerly known as Mos Def) released a graphic video of himself being force-fed. The clip, produced in conjunction with Reprieve, a legal rights organisation representing Abu Wa’el Dhiab, has since gone viral.

“The judge’s ruling leaves Obama with nowhere to hide,” Cori Crider, Guantanamo attorney and strategic director at Reprieve, said Tuesday. “He has the power to address the hunger strike – he could end it tomorrow by starting to free prisoners his own government has cleared for release.”

On Tuesday, U.S. military personnel at GuantanamoBay confirmed that Muslim detainees required to undergo force-feeding would be fed only when the sun is down, in accordance with religious diktat during Ramadan.

Yet the Pentagon has been careful to state that detainees are receiving such treatment as an “accommodation, not a right”, a reference to the fact that detainees continue to be legally exempt from U.S. protections that take into account religious belief.

“It is really outrageous that Guantanamo commanders are offering this supposedly religious gesture to accommodate Guantanamo detainees’ Ramadan fasting by rearranging the schedule of the force-feedings,” the ACLU’s Dakwar says.

“This adds insult to injury. It’s unacceptable to have the force-feedings in the first place, and therefore it’s beyond the pale to do so after the daily Ramadan fasting.”

Lawyers for Reprieve, meanwhile, have expressed concern that that the night-time force-feeding schedule could pose dangers to detainees’ health.

There will be “just 10 hours and 44 minutes [between sunset and sunrise] for respondents to implement two force-feedings of 45 detainees for up to an hour of feeding time and four hours of total observation time per detainee”, Crider and others warn in a brief filed on Jul. 5.

“[Even] if this can even be achieved, GuantanamoBay will become a veritable force-feeding factory.”

According to the U.S. military, 106 of the 166 detainees at Guantanamo are currently considered to be on hunger strike, protesting what they see as their indefinite detention after many have remained imprisoned without charge after a dozen years. Of these, military officials view 45 detainees to be so weak as to necessitate forceful feedings.

Importantly, nearly all of those receiving force-feedings – including Abu Wa’el Dhiab – have been cleared for release, many for several years. But they remain trapped in a legal limbo due to U.S. laws prohibiting the transfer of some detainees, particularly Yemenis, back to their homeland.

Still, many rights groups have increasingly noted that President Obama has powers available that could alleviate key issues in this process.

Indeed, President Obama himself has expressed sentiments similar to Judge Kessler’s, but has repeatedly insinuated that his hands are tied. In May, during a major national security speech in which he suggested that the U.S. government would begin winding down the “war on terror”, including reviving a push to close Guantanamo, the president directly criticised the force-feedings at the detention centre.

“Look at the current situation, where we are force-feeding detainees who are holding a hunger strike,” the president stated on May 23. “Is that who we are? Is that something that our founders foresaw? Is that the America we want to leave to our children? Our sense of justice is stronger than that.”

Yet on Monday, Obama’s Department of Justice refused to halt the Ramadan force-feedings. And on Tuesday, White House spokesperson Jay Carney was noncommittal on Judge Kessler’s verdict, again trying to spread responsibility for the situation to Congress.

“The president made clear in April, and I think it holds true today, that we don’t want these individuals to die, and the action being taken is to prevent that from happening,” Carney said.

“[H]e calls on Congress to work with him to ensure that we can lift the moratorium on detainee transfers to Yemen … But the long-term goal here has been … we need to close this facility because it’s in our [national security] interest to do so.”