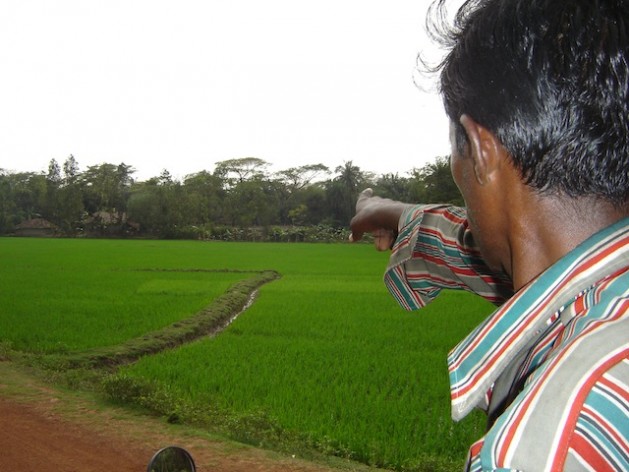 An Indian farmer points to his modest plot of farmland, which no longer yields enough to feed his family. Credit: Sujoy Dhar/IPS

NEW DELHI, Jun 6 2014 (IPS) - Ramanjareyulu, a 55-year-old farmer from the southern India state of Andhra Pradesh, has been struggling to find his feet ever since inadequate rainfall dealt a blow to his harvest of groundnut and red gram (a pulse crop that grows primarily in India).

A man who once sustained his family of five off his small patch of farmland, Ramanjareyulu now finds himself in abject poverty, and is considering joining a massive exodus of farmers heading for the big cities like Bangalore, Chennai and Hyderabad in the hopes of finding work as unskilled labourers.

“I don’t know why nature is so unkind to us,” the desperate farmer told IPS.

Dr. Y. V. Malla Reddy, director of the Bangalore-based Accion Fraterna Ecology Centre, which works with farmers in the region, has the answer to that question and is quick to articulate it: climate change.

"How do we adapt to disasters like [...] flash floods, to drought, to unseasonal rains, to multiple cyclones - all of which occurred in 2013-2014?" -- Chandra Bhusan, deputy director-general of the Centre for Science and Environment
“The farmers are now living in dire straits,” he told IPS. “Of the nearly 700,000 farmers in Anantapur [the largest district in Andhra Pradesh], 500,000 are in this situation due to a drastic reduction in the number of rainy days per year.”

All across India, similar warning signs indicate that the country is on a dangerous trajectory. From the disappearing Sundarbans (the largest single bloc of mangrove forest in the world situated in the Bay of Bengal), to the vast tracts of parched farmland in southern, western and northern India, to the plight of all those caught in the disaster-struck Himalayan state of Uttarakhand, extreme weather is taking its toll.

With carbon emissions increasing by 7.7 percent in 2012 – and CO2 emissions from coal plants shooting up by 10.2 percent that same year – the country seems to be contributing towards its own demise.

And the “worst is yet to come”, according to a report by the United Nations Intergovernmental Panel on Climate Change (IPCC), which found that the highly fertile Indo-Gangetic plains are under threat of a significant reduction in wheat yields.

Currently the area produces 90 million tons of grain annually, accounting for nearly 15 percent of global wheat production, but projections indicate a nearly 51 percent decrease in the highest yielding areas due to hotter temperatures.

Such a scenario could be disastrous for the roughly 200 million residents of the plains, whose food intake is dependent on harvests, experts say.

India is also one of the 27 countries that are “most vulnerable” to sea level rise caused by global warming.

According to the Geological Survey of India, a one-metre rise in sea level is expected to inundate about 1,000 square kilometres of the Sundarbans delta.

Nearly half of the 102 islands that comprise the U.N.-protected biosphere reserve have become uninhabitable due to rising seas and coastal erosion over the last four decades.

About a fifth of the southern part of this delta complex, the heart of a major tiger reserve, is already submerged. At the current rate of erosion, scientists are predicting a loss of 15 percent of farmlands and a further 250 square km of the national park.

Another major red flag for India was last year’s Uttarakhand tragedy, when cloudbursts and glacial leaks caused a flash flood that swept away thousands of pilgrims and tourists in the northern state in what scientists called a ‘Himalayan tsunami’.

Against this backdrop, Indian lawmakers are joining some 500 delegates descending on Mexico City on Jun. 6-8 for the second World Summit of Legislators organised by GLOBE International for the purpose of drafting an international climate agreement centered on national legislation.

India Ready for ‘Robust’ Stand on Climate Change from IPS News on Vimeo.

According to Pranav Chandan Sinha, director of GLOBE India, the Indian public is waking up to the realities of climate change, thus pushing the government to seek a balance between development and environmental protection.

Sinha told IPS the new government, headed by Prime Minister Narendra Modi of the Bharatiya Janata Party (BJP), which has an absolute majority in parliament, is likely to pursue sustainable development goals, in line with GLOBE International’s emphasis on the importance of wealth accounting, valuation of ecosystem services and legislative reforms.

Ever since the Uttarakhand disaster, for instance, GLOBE India has been engaging legislators from various states, particularly in the north, on the need for legislative reforms and combined efforts to tackle climate change.

The purpose of forums like the summit currently underway in Mexico “is not only to educate but to demystify international negotiations on environment, sustainability and climate change and communicate them at the national and state level,” Jayanat Chaudhary, former Indian parliament member and founder of GLOBE India, told IPS.

Although these meetings cannot hope to generate binding action, they serve to inform lawmakers who can push their respective governments to take a more robust stand on issues like emissions targets, said Chandra Bhusan, deputy director-general of the New Delhi-based Centre for Science and Environment, India’s leading green pressure group.

Bhusan says India has to meet multiple challenges on the climate change front, particularly due to the centralisation of power that stymies action on a local level.

“One challenge is adaptation itself,” he told IPS. “How do we adapt to disasters like the Uttarakhand flash floods, to drought, to unseasonal rains, to multiple cyclones – all of which occurred in 2013-2014. This has been a period of extreme weather and we have to adapt to the variability,” he asserted.

“There is an energy challenge too. About 800 million people in India still cook on cow dung and firewood stoves. So we need clean energy for all and we cannot say we will not do anything,” Bhusan added.

Still, the forecast is not entirely bleak, with various local governments taking some positive steps towards accountability and sustainability.

Uttarakhand, for instance, recently became the first state in India to start tabulating its gross environment product (GEP) – a measure of the health of the state’s natural resources – to be released annually alongside its GDP figures.

In partnership with Wealth Accounting and the Valuation of Economic Systems (WAVES), the Himalayan state of Himachal Pradesh has begun tabulating costs of timber, water and minerals.

A 2013 report entitled Green National Accounts in India also spells out the Union Government’s plans to include the value of natural resources in its annual economic calculations.

Green activists say these positive steps give India a stronger voice in the international arena, which it should use to press polluting western nations for a binding agreement on carbon emissions.