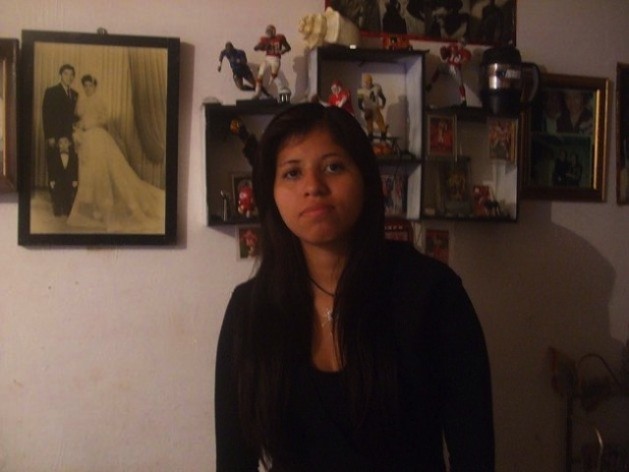 Yakiri Rubí Rubio, a young Mexican woman, was jailed for three months and is at risk of being sent back to prison for killing her rapist in self-defence. Credit: Daniela Pastrana/IPS

MEXICO CITY, Jun 27 2014 (IPS) - “I just want all this to be over,” Yakiri Rubí Rubio, a young Mexican woman facing trial for killing the man who raped her in December 2013, laments to IPS.

The 21-year-old Rubio lives in the bustling neighbourhood of Tepito, one of the most dangerous areas of Mexico City.

On the evening of Dec. 9 she set out to meet her girlfriend when she was approached by two men in the street. They abducted her at knifepoint and took her on their motorcycle to a hotel, according to Rubio’s statements throughout the investigation.

She testified that both men beat her, then one of them, a 90-kilogram 37-year-old called Miguel Ángel Anaya, raped her while his brother, Luis Omar Anaya, went out for a smoke. Rubio fought her attacker and wounded him in the abdomen and neck with his own knife. Miguel Ángel fled the hotel on his motorbike, bleeding.

“Thousands of women have been raped and then killed, and their killers walk free. But a rape victim who defends her own life ends up in prison, while one of her attackers is at liberty." -- journalist and activist Lydia Cacho
Rubio also ran out of the hotel and asked some police officers for help. Bleeding and half naked, she got to a branch of the Public Prosecutor’s Office three blocks away.

While her various wounds were being treated, including a 14-centimetre gash on her arm, Luis Omar Anaya arrived and accused her of murdering his brother in a lovers’ quarrel, a specious argument according to her defence lawyers, since Rubio is a lesbian.

Rubio was charged with homicide, an offence punishable by 20 to 60 years in prison, and sent to a facility for women who have already been convicted and sentenced.

Three months later a judge reclassified her offence as “legitimate self-defence with excessive violence”, and set bail at 10,000 dollars. Her family paid this sum, with great difficulty; she was freed pending trial and had to appear weekly in court.

Now she lives shut up in her home, because of the constant threats she and her family receive. She only goes out in the company of her parents.

“She went from one kind of prison to another,” said Marina Beltrán, who raised Rubio since she was six months old, and was present at the interview with IPS.

Luis Omar Anaya denied taking part in the abduction and said he was at his home, a short distance from the hotel, when his brother arrived, at death’s door.

On Monday Jun. 23 Anaya petitioned a federal judge to revoke Rubio’s conditional release. The appeal must be decided within 90 days. IPS tried to interview Anaya’s lawyer, without success.

The entire legal process has thrown a protective cloak around the Anaya brothers, including subsequent fabrication of evidence against Rubio.

In the view of organisations working for the defence of women’s rights in Mexico, Rubio has become a symbol in the fight against machismo in the justice system, where the norm is to disparage the complaints of women who have been raped.

“Thousands of women have been raped and then killed, and their killers walk free. But a rape victim who defends her own life ends up in prison, while one of her attackers is at liberty,” wrote journalist and activist Lydia Cacho.

This case, at least, has shown all the defects of the justice system where rape is concerned.

The Land of Femicide

In Mexico, a country of 118 million people, an average of 6.4 women are murdered every day. Half of these are femicides, that is, gender-related murders motivated by sexism or misogyny.

The term femicide emerged from the murders of women in Ciudad Juárez, in the northern state of Chihuahua, in 1993.

In Chihuahua the murder rate for women is 15 times higher than the world average.

But the problem has grown. Between 2006 and 2012 alone, femicides in Mexico increased by 40 percent, according to the report “From Survivors to Defenders: Women Confronting Violence in Mexico, Honduras and Guatemala.”

Every year 15,000 rapes are reported in Mexico, but only 2,000 come to trial and less than 500 result in a conviction, according to the 1985-2010 report on Violence and Femicide in Mexico by parliament and government agencies and U.N. Women.

The real situation is much worse because only 12 to 15 percent of women and girls who are raped report it, according to information presented by Amnesty International in July 2012 to the U.N. Committee on the Elimination of Discrimination against Women (CEDAW).

Amnesty International is not aware of the existence of any proof that the number of rapes is falling or that trials and convictions with sentencing are rising, the organisation said.

In Rubio’s case, officials at the Public Prosecutor’s Office took nine days to open an investigation into the rape and refer the case to the special prosecution service for crimes of violence against women.

She was not examined by a gynaecologist, nor was she given psychological care or contraceptive pills, as the law in the federal district of Mexico City requires.

Mexican Official Standard 046, in force since 2005, states that in the case of rape, institutions providing medical care “must offer emergency contraception immediately and up to 120 hours after the event” and are obliged to “provide medical abortion services.”

Failure to do so is another form of machismo, defence lawyer Ana Katiria Suárez, who is acting pro bono for Rubio, told IPS. She said the category of “excessive force” in legitimate self-defence is mostly used against women rape victims.

The main precedent for this case occurred in February 1996 in the state of Mexico, largely occupied by Greater Mexico City. On leaving a party, a young woman shot and killed her friend’s boyfriend who attempted to rape her.

A judge ruled then that, since his blood alcohol level was extremely high and hers was not, the aggressor was not responsible for his actions while she was in control of hers.

“Excess violence in legitimate self-defence is absurd!” Rubio’s mother complained. “How can you defend yourself a little bit?”

The nuance is decisive. Had the judge not ruled excessive violence when the offence was reclassified, Rubio would have been exonerated; but if she is found guilty of excessive violence, she will have to pay her rapist’s family more than 28,000 dollars for “damages.”

In contrast, Rubio’s rape complaint is at a standstill because the federal district prosecution service considers that the aggressor has paid in full. The prosecutors have not considered reparations for the harm done, or regarded the participation of the second attacker.

Six months after the rape, Rubio and her family are battling on two fronts: in the legal sphere, for her to be acquitted of murder and for reparations to be made, and on the personal level, to live without fear and get their lives back.

During this time her parents have given up their jobs and her brothers and sisters have left school. The family is receiving psychological support, and Rubio has had to learn how to deal with the press.

“At first it was dreadful, I would start crying because every time I had to talk about what happened I would relive it over again. Now I don’t cry any more. I just want it all to be over,” she said.

She also wants to go back to studying. “I used to prefer working. But now I would like to study law to help other women who are going through the same thing I did, but don’t have a lawyer like mine,” she said, finally summoning up a faint smile.