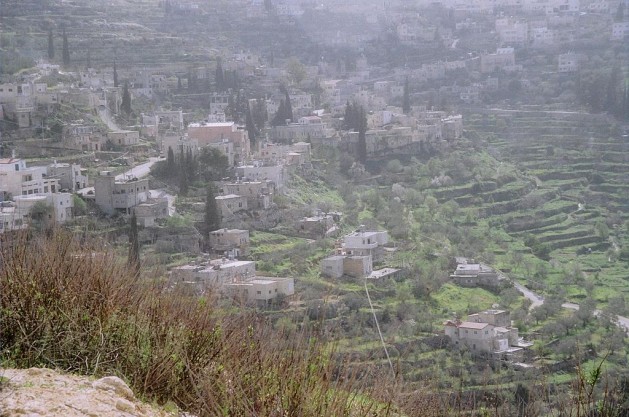 View of the terraces in the Palestinian village of Battir, now a World Heritage site. Credit: Courtesy of Wikipedia

BATTIR, West Bank, Jul 13 2014 (IPS) - The Palestinian village of Battir, just six kilometres southwest of Jerusalem and a similar distance from Bethlehem, is the latest to be trapped in the gap between international recognition and Israel’s policies in the West Bank.

The village’s agricultural terraces covering the surrounding hill slopes, and the spring water-fed open irrigation channels that run through them, have been in use for centuries.

Last month, this unique landscape was designated a World Heritage site by the U.N. Educational, Scientific and Cultural Organisation (UNESCO), making it only the second such Palestinian site after the Old City of Jerusalem site.

Local residents, who depend on agriculture for their livelihoods, have been campaigning against the six-kilometre long Separation Barrier plans since 2005, and fear the barrier will take a toll, not only on the centuries-old living landscape, but also on their way of life.

The decision to inscribe Battir in the World Heritage list comes amid Israeli plans to establish a new section of its Separation Barrier at the foot of the terraced hill slopes, cutting through the Palestinian village’s lands.

According to the Israeli military authorities, this section of the Separation Barrier is mainly intended to protect the railway on the margins of the village’s lands. Military representatives told the Israeli Supreme Court in 2011, there is “specific intelligence about attempts of terror organisations to infiltrate into Israel from this direction.”

However, they also reiterated that “the abovementioned security threat is not at all posed by residents of Battir, but from other hostile elements active in this area and those especially coming to the Battir area due to the fact the barrier route is still incomplete there.”

Local residents, however, who depend on agriculture for their livelihoods, have been campaigning against the Separation Barrier plans since 2005, fearing the new six kilometre-long barrier will take a toll, not only on the centuries-old living landscape, but also on their way of life.

Over the years, their campaign has garnered much support, including from environmental groups such as the Society for the Protection of Nature in Israel and Friends of the Earth Middle East (FoEME). Two perhaps unlikely other sources of support have been an Israeli field school in the settlement bloc of Gush Etzion and the Israeli Nature and Parks Authority (INPA).

Their environmental support might be genuine, but their objection to the Separation Barrier also fits well with their own political agenda, says Ofer Zalzberg, a Jerusalem-based senior analyst with the International Crisis Group.

INPA, in particular, has added its voice in support of protecting the Palestinian village’s traditional terraces, while managing a number of national parks – some of which are included in the tentative list of Palestine’s World Heritage sites.

In May last year, the Israeli Supreme Court ordered suspension of the works on the section of the barrier in Battir’s lands, but a final ruling is still pending. Now, the petitioners from the village and from FoEME are hopeful that the new World Heritage status could influence the court’s decision.

Nevertheless, Battir’s eggplants, vines and olives are closely intertwined with the greater Israeli-Palestinian conflict. The World Heritage nomination was submitted under a special emergency procedure a day after the latest court session, and right before this year’s deadline.

But it could have been made already a year earlier if it had not been for a request from U.S. Secretary of State John Kerry, according to Israeli daily Haaretz. Freezing the Palestinian bid, the paper reported, was meant to allow the renewal of peace negotiations. “Senior Foreign Ministry officials in Jerusalem noted that Israel is keeping track of the Palestinian move and will try to prevent it,” Haaretz added.

Palestinian news agency Ma’an reported that suspending Battir’s nomination was part of a deal whereby, in exchange, Israel would allow a UNESCO team to examine the Old City of Jerusalem, another World Heritage site.

Eventually, Battir’s application was successful and, in acknowledging the threat to the site, the World Heritage Committee also agreed to include it in its ‘in danger’ list, despite an expert opinion from the International Council on Monuments and Sites (ICOMOS), the professional cultural heritage body advising UNESCO, which was generally sceptical about the merits of the site’s inscription.

However, Israel’s Ministry of Defence remains intent on going ahead with the barrier plan. “The barrier’s route in the area of Battir is intended to protect the citizens of Israel from terrorists and terror entering [the country],” read a statement from the ministry to IPS.

“The Security Barrier’s route will be established with no harm to natural assets,” it continued. “No terrace will be destroyed and the irrigation system will not be harmed. The IDF [Israel Defence Forces] is sensitive to the natural assets at the site, but it is first and foremost committed to the security of the citizens of Israel.”

And it does seem rather unlikely that Battir’s World Heritage inscription will have a significant impact on the Supreme Court ruling.  “I’d be surprised if, on these grounds, the Supreme Court categorically rejects building the barrier there,” Zalzberg told IPS.

“I think that’s not good for the image of Israel to be destroying World Heritage sites,” says Nader al-Khateeb, FoEME’s Palestinian co-director.

But Zalzberg believes such designation would not be seen by the Israeli government as a major factor. “There are already places where Israel has taken its own stance on things that are much more serious in the eyes of the international community,” he said.

Rather, an Israeli decision to go ahead with the barrier in Battir, thus defying the U.N. agency, “could be part of a trend where Israel further pushes UNESCO to the wall on anything related to managing sites, possibly also in Jerusalem.”

From the court proceedings, it seems that a barrier will eventually be built. In its latest session on the case, in January, the Supreme Court focused on ways to mitigate damage to the terraces, for example by examining the option of removing one of the train tracks, and by ordering the Israeli military to allow Battir farmers access to their lands through gates in the barrier.

Opponents, however, are concerned about additional, collateral damage to the ancient terraces landscape from the construction process involving heavy machinery.

Akram Bader, mayor of Battir, is concerned that building the barrier would not only take a toll on the local cultural heritage, but also on the peaceful situation in the area. “Through the last 64 years there have been no incidents in the area, so why are they saying they want to build a Security Barrier?” he asks.

In fact, establishing the barrier, ostensibly to ensure Israel’s security, could lead to violence, Bader warns. “If the terraces are damaged, it means that the people will not think about peace in this area. They will change their minds about it.”

Israel is, at least formally, committed to protecting cultural heritage in the West Bank, as a member of the UNESCO World Heritage Committee and also as one of the earliest signatories of the 1954 Hague Convention for the Protection of Cultural Heritage in the Event of Armed Conflict.

Meanwhile, Battir might not be the last case of its kind. At least two proposals on Palestine’s World Heritage Tentative List could overlap the route of Israel’s Separation Barrier. In one, Umm Al-Rihan Forest, the barrier already exists. In another, El-Bariyah, also known as the Judean desert, plans to establish a stretch of the Separation Barrier triggered vocal protest from Israeli environmentalists six years ago.