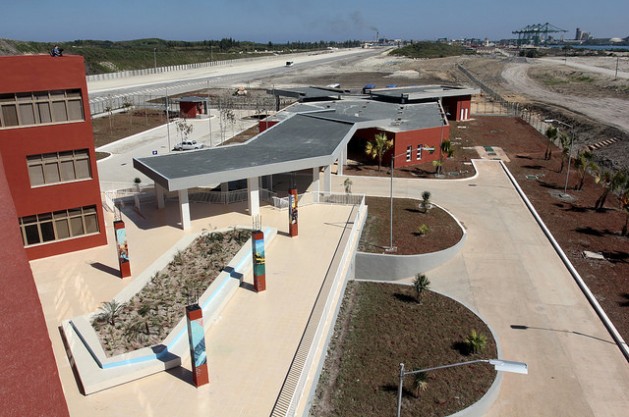 HAVANA, Aug 22 2014 (IPS) - The Mariel special economic development zone, the biggest construction project undertaken in decades in Cuba, emerged thanks to financial support from Brazil, which was based on political goodwill, a strategy of integration, and business vision.

“Cuba would not have been able to undertake this project from a technical or economic point of view,” economist Esteban Morales told IPS. He added that the geographic setting makes the development zone strategic in terms of trade, industry and services in Latin America and the Caribbean.

Brazil financed the construction of the container terminal and the remodeling of the port of Mariel, which is equipped with state-of-the-art technology to handle cargo from Post-Panamax container ships that will begin to arrive when the expansion of the Panama Canal is completed in December 2015.

Post-Panamax refers to vessels that do not fit in the current Panama Canal, such as the supertankers and the largest modern container and passenger ships.

The port, 45 km west of Havana, is located along the route of the main maritime transport flows in the Western hemisphere, and experts say it will be the largest industrial port in the Caribbean in terms of both size and volume of activity.

Construction of the terminal, in the heart of the 465 sq km special economic development zone, has included highways connecting the Mariel port with the rest of the country, a railway network, and communication infrastructure, and the port will offer a variety of services.

In the special zone, currently under construction, there will be productive, trade, agricultural, port, logistical, training, recreational, tourist, real estate, and technological development and innovation activities, in installations that include merchandise distribution centres and industrial parks.

The special zone is divided into eight sectors, to be developed in stages. The first involves telecommunications and a modern technology park where pharmaceutical and biotechnology firms will operate – two sectors which will be given priority in Mariel, along with renewable energies, agriculture and food, among others.

The Cuban government is currently studying the approval of 23 projects from Europe, Asia and the Americas for Mariel, in the chemical, construction materials, logistics and equipment rental industries.

The terminal was inaugurated on Jan. 27, and during its first six months of operation it received 57 ships and some 15,000 containers – small numbers compared to the terminal’s warehouse capacity of 822,000 containers. Post-Panamax vessels can carry up to 12,600 containers, three times more than Panamax ships.

Another economist, Pedro Monreal, estimates that the cost per container will be cut in half.

The lower costs, he said, will improve the competitiveness of Brazil’s manufactured goods, to cite one example. Mariel, where a free trade zone will also operate, could become a platform for production and export by the companies, even for supplying Brazil’s domestic market. 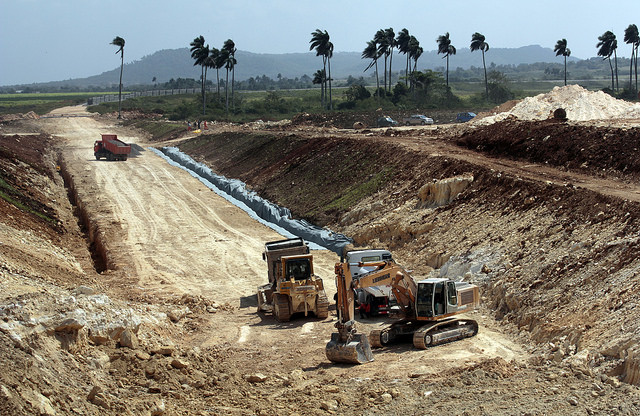 Heavy machinery prepares the terrain for a railway that will form part of the new infrastructure linked to the special development zone in the port of Mariel – the biggest project undertaken in Cuba in decades: Credit: Jorge Luis Baños/IPS

Although Decree Law 313, which created the special economic development zone, was passed in September 2013, the remodeling of Mariel began three years ago, led by a joint venture formed in February 2010 by the Compañía de Obras e Infraestructura, a subsidiary of the private Brazilian construction firm Odebrecht, and Quality Cuba SA.

The container terminal is run by Global Ports Management Limited of Singapore, one of the world’s biggest container terminal operators, which has been working with the Cuban firm Almacenes Universales S.A, which is the owner and user of the terminal, and responsible for oversight of its efficient use.

The relationship between Cuba and Brazil is a longstanding one. Former Brazilian president Luiz Inácio Lula da Silva (2003-2010) did not hide his sympathies for the Cuban revolution, and has visited this country a number of times, first as a trade unionist and political party leader, and then as a president and former president.

Two packages of agreements signed in 2008 and 2010 between Lula and Cuban President Raúl Castro marked their interest in strengthening bilateral ties, an effort continued by current Brazilian President Dilma Rousseff.

When she attended the inauguration of the terminal, Rousseff said the project would take 802 million dollars in the first stage, plus 290 million for the second stage. The first of Brazil’s loans was initially to go towards construction of the road, but the local government decided to start with the port.

The credit was granted by Brazil’s National Bank of Economic and Social Development (BNDES). Havana provided 15 percent of the investment needed for the work.

“Cuba is a priority for our government, and Brazil is important to Havana,” the director general of the Brazilian Agency for the Promotion of Exports and Investments (APEX-Brazil), Hipólito Rocha, told IPS.

APEX-Brazil was created by Lula and Castro to promote joint business ventures with Cuba, the rest of the Caribbean and Central America.

Odebrecht is the most important company involved in Mariel, but diplomatic sources told IPS that a total of around 400 Brazilian companies are taking part in the project. “Between our countries there is affinity, political will, an interest in integration, but business matters are also important,” Rocha said.

He added that Cuba strictly lives up to its financial commitments with Brazil, and said bilateral relations “are solid, sustainable and bring benefits to our country as well.”

Analyst Arturo López-Levy said Brazil’s involvement in the Mariel project was decisive not only because of the investment. The political scientist, who lives in the United States, says the Brazilian government is sending a message to Washington and the European Union and other emerging powers that it backs the transformations underway in Cuba.

The presidents of China, Xi Jinping, and Russia, Vladimir Putin, also sent out signals when they visited Cuba in July, indicating their interest in expanding cooperation with Havana.

The two presidents stopped over in Cuba when they travelled to the sixth summit of the BRICS group (Brazil, Russia, India, China and South Africa), held Jul. 14-16 in Brazil.

The strengthening of ties promises greater access to the Chinese and Russian markets, attraction of investment in areas of common interest like the pharmaceutical and energy industries, and cooperation for the modernisation of strategic areas in defence, ports and telecommunications, López-Levy told IPS.

With respect to the possible interest of U.S. businesses in getting a foothold in the special economic development zone, and to an increase in pressure for the lifting of the five-decade U.S. embargo, the analyst said “the Cuban market awakens very limited interest in the United States.”

However, he said it was “clear” that U.S. investors are becoming more interested, especially Cuban-Americans.

“In order for this motivation to turn into political pressure against the embargo, the Cuban economy has to give out clear signs of recovery and of the government’s willingness, in key areas, to adopt a mixed economy with transparent guarantees for investors and export capacity,” he said.

Rocha has a somewhat different opinion.

“The embargo is going to collapse under its own weight,” he said. “Business will knock it down.”

It was seen as symbolic that the first ship that docked in the Mariel port after it began to operate brought food for Cuba from the United States – cash-only imports, which were authorised by the U.S. Congress in 2000.