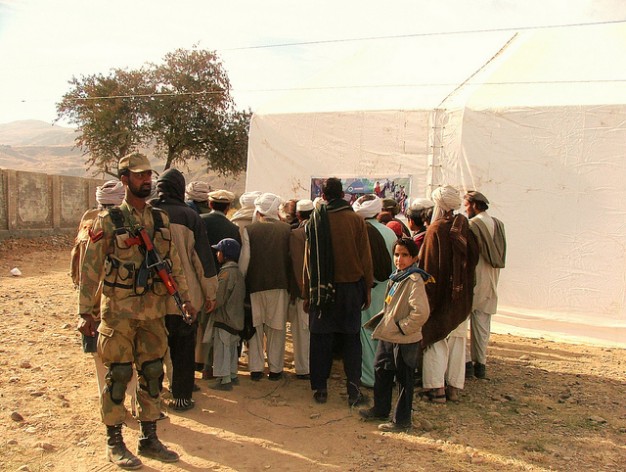 Moved by the plight of nearly a million refugees fleeing a military offensive in the North Waziristan Agency of the Federally Administered Tribal Areas (FATA), which began on Jun. 15, Tufail now spends his days distributing food rations and medical supplies to beleaguered residents of huge camps for the displaced.

Tufail tells IPS that he and other volunteers see to the needs of some 10,000 families on a daily basis. “We cannot leave our people in distress,” the young man says with conviction.

“We have been keeping a strict eye on the relief camps organised by some jihadist outfits. We want to make sure they are not used for the recruitment of civilians for terrorist activities.” -- Akram Khan, a police inspector in Bannu
His passion is admirable, but the organisation he works for is dubious at best. Known simply as the Al-Rehmat Trust (ART), this charity group is widely considered a front for the outlawed Kashmir-based Jaish-e Mohammed (‘the army of Mohammed’ or JeM).

Banned in Pakistan since 2002, JeM is today a designated terrorist organisation, and stands accused of orchestrating the 2001 Indian Parliament attack.

Though the group itself has been lying low since 2003, its huge membership reveals itself during times of national crisis as efficient and well-endowed providers of relief.

“We were the first to start rescue efforts when a massive earthquake hit northern Pakistan in 2005,” Tufail tells IPS proudly. “Our volunteers rescued people from the debris and saved their lives.”

“I have devoted my own life to serve the people from this platform because ART serves people selflessly,” he says confidently.

It is this very gumption – expressed by scores of impressionable young people who serve these front groups – that have officials and law enforcement personnel extremely concerned about the influence of terrorist organisations during times of trouble.

“We have been keeping a strict eye on the relief camps organised by some jihadist outfits,” Akram Khan, a police inspector in Bannu, home to the majority of the IDPs, tells IPS. “We want to make sure they are not used for the recruitment of civilians for terrorist activities.”

Still, he is concerned that the sprawling camps, filled to beyond their capacity with desperate, vulnerable and traumatised civilians, provides a perfect recruiting ground for terrorists dressed as aid workers.

“The displaced are in need of monetary and social assistance”, which jihadist elements are more than willing to provide, he says.

“The nation is already experiencing hard times due to soaring terrorism – we can’t afford to allow militant groups to grow at the cost of displaced people,” he adds.

Yet this is exactly what appears to be happening, political analyst Dr. Khadim Hussain, chairman of the Baacha Khan Trust Education Foundation, tells IPS.

Besides JeM’s charity wing ART, the Jamat ud-Dawa (JuD), a missionary-style front group for the feared Lashkar-e-Taiba (‘army of the good’ or LeT) has also been active in relief efforts, rushing to the aid of those displaced by natural or man-made disasters, and winning the hearts of many who see the government’s emergency response as inadequate, he says.

The Falah-e-Insaniyat Foundation (FIF), also believed to be a front group for the LeT, has been providing medicines and foodstuffs to thousands of families who don’t know where their next meal will come from.

“We were the first to reach Bannu and start relief work because we couldn’t bear to see our Muslim bretherin in crisis,” Muhammad Shafiq, a volunteer with ART, tells IPS.

Shaukat Ali Mahsud, a displaced man with a family of seven to care for, says he is “thankful to both the organisations for their sincerity and devotion”.

“These people are helping us. They are not terrorists, they are just very good Muslims,” he tells IPS, adding that he personally knows dozens of families who have received life-saving support from volunteers with one of the many groups believed to be charity wings for terrorist outfits.

“We will never forget their help in these trying times,” he asserts.

Several major players in the world of geopolitics – including India, the United States and the United Kingdom – have designated groups like JeM and LeT as “deadly terrorist organisations” and accused them of waging proxy wars in Indian-occupied Kashmir.

Due to heavy international pressure, both groups have been keeping a relatively low profile, but the massive humanitarian crisis caused by the government’s efforts to wipe out the Taliban from their mountainous stronghold on the Afghan border has brought JeM and LeT back into the limelight, Muhammad Shoaib, an analyst at the University of Peshawar, tells IPS.

“These outfits, with the help of the state, have carefully maintained their welfare wings to prove that they are more than just militant formations,” he states.

The allegation that major terrorist groups enjoy government support is not new, and takes on added weight during times of national crisis.

For instance, numerous secular NGOs eager to commence relief operations among the displaced have been unable to secure the required ‘No Objection Certificate’ (NOC), a document issued by the government as proof that a particular programme or activity is authorised by the state.

Jawadullah Shah, who heads the Rural Health Foundation, hasn’t been able to secure an NOC despite submitting an application to the government on Jun. 18. He says the delay is preventing his organisation from carrying out aid work.

On the other hand, he tells IPS, ART has been actively working with the affected populations without any hindrance.

“The government, as well as army officers, are extremely cooperative; it has been smooth sailing,” according to ART volunteer Shafiq.

Meanwhile, the JuD, which stands accused of orchestrating the 2013 attack on the Indian consulate in Jalalabad, western Afghanistan, is also extremely active in the aftermath of disasters, despite being branded a terrorist operation by the United Nations Security Council in 2008.

The Pakistan government says there is no evidence linking the group with terrorist activity.

“We are running hospitals, schools and colleges for the poor people in Pakistan,” Hafiz Muhammad Saeed, founder of the JuD who has been accused by the Indian government of plotting the 2008 Mumbai terror attacks, tells IPS.

The FIF, believed to be closely aligned with the LeT and the JuD, is also playing a major role.

Though the displaced are grateful for the assistance, experts and officials are determined to stamp out what they see as militant groups infiltrating vulnerable populations and recruiting foot soldiers from their midst.

Hussain, of the Baacha Khan Trust Education Foundation, does not mince his words when describing the systematic recruitment operation: “As we have witnessed during disasters like the earthquake in 2005, the military operation in Swat in 2009 and the floods in 2010, these groups use charity work to win the hearts and minds of Pakistani people by creating ‘soft corners’ of moral and economic assistance.”

Instead of allowing the radicalisation of displaced people, the government should be de-radicalising the militants to achieve lasting peace, he tells IPS.

The very simple and effective strategy pursued by militant groups must not be allowed to continue unchecked, he adds.

“The war against militants currently being waged in the northern province will be meaningless if other militant entities are allowed to grow with impunity at the same time,” Hussain concludes.