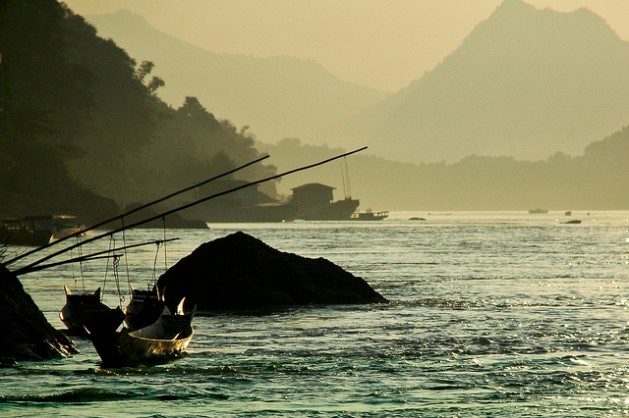 Fishermen's boats on the Mekong River in northern Laos. There are already 30 existing dams along the river, and an additional 134 hydropower projects are planned for the lower Mekong. Credit: Irwin Loy/IPS

WASHINGTON, Aug 29 2014 (IPS) - Large-scale dams are likely having a detrimental impact on water quality and biodiversity around the world, according to a new study that tracks and correlates data from thousands of projects.

Focusing on the 50 most substantial river basins, researchers with International Rivers, a watchdog group, compiled and compared available data from some 6,000 of the world’s estimated 50,000 large dams. Eighty percent of the time, they found, the presence of large dams, typically those over 15 metres high, came along with findings of poor water quality, including high levels of mercury and trapped sedimentation.

“The evidence we’ve compiled of planetary-scale impacts from river change is strong enough to warrant a major international focus on understanding the thresholds for river change in the world’s major basins." -- Jason Rainey

While the investigators are careful to note that the correlations do not necessarily indicate causal relationships, the say the data suggest a clear, global pattern. They are now calling for an intergovernmental panel of experts tasked with coming up with a systemic method by which to assess and monitor the health of the world’s river basins.

“[R]iver fragmentation due to decades of dam-building is highly correlated with poor water quality and low biodiversity,” International Rivers said Tuesday in unveiling the State of the World’s Rivers, an online database detailing the findings. “Many of the world’s great river basins have been dammed to the point of serious decline.”

The group points to the Tigris-Euphrates basin, today home to 39 dams and one of the systems that has been most “fragmented” as a result. The effect appears to have been a vast decrease in the region’s traditional marshes, including the salt-tolerant flora that helped sustain the coastal areas, as well as a drop in soil fertility.

The State of the World project tracks the spread of dam-building alongside data on biodiversity and water-quality metrics in the river basins affected. While the project is using only previously published data, organisers say the effort is the first time that these disparate data sets have been overlaid in order to find broader trends.

“By and large most governments, particularly in the developing world, do not have the capacity to track this type of data, so in that sense they’re flying blind in setting policy around dam construction,” Zachary Hurwitz, the project’s coordinator, told IPS.

“We can do a much better job at observing [dam-affected] resettled populations, but most governments don’t have the capacity to do continuous biodiversity monitoring. Yet from our perspective, those data are what you really need in order to have a conversation around energy planning.”

Today, four of the five most fragmented river systems are in South and East Asia, according to the new data. But four others in the top 10 are in Europe and North America, home to some of the most extensive dam systems, especially the United States.

For all the debate in development circles in recent years about dam-building in developing countries, the new data suggests that two of the world’s poorest continents, Africa and South America, remain relatively less affected by large-scale damming than other parts of the world.

Of course, both Africa and South America have enormous hydropower potential and increasingly problematic power crunches, and many of the countries in these continents are moving quickly to capitalise on their river energy.

According to estimates from International Rivers, Brazil alone is currently planning to build more than 650 dams of all sizes. The country is also home to some of the highest numbers of species that would be threatened by such moves.

Not only are Brazil, China and India busy building dams at home, but companies from these countries are also increasingly selling such services to other developing countries.

“Precisely those basins that are least fragmented are currently being targeted for a great expansion of dam-building,” Hurwitz says. “But if we look at the experience and data from areas of high historical dam-building – the Mississippi basin the United States, the Danube basin in Europe – those worrying trends are likely to be repeated in the least-fragmented basins if this proliferation of dam-building continues.”

Advocates are expressing particularly concern over the confluence of the new strengthened focus on dam-building and the potential impact of climate change on freshwater biodiversity. International Rivers is calling for an intergovernmental panel to assess the state of the world’s river basins, aimed at developing metrics for systemic assessment and best practices for river preservation.

“The evidence we’ve compiled of planetary-scale impacts from river change is strong enough to warrant a major international focus on understanding the thresholds for river change in the world’s major basins, and for the planet as a whole system,” Jason Rainey, the group’s executive director, said in a statement.

Energy access remains a central consideration in any set of development metrics, and lack of energy is an inherent drag on issues as disparate as education and industry. Further, concerns around climate change have re-energised what had been flagging interest in large dam projects, epitomised by last year’s decision by the World Bank to refocus on such projects.

Yet there remains fervent debate around whether this is the best way to go, particularly for developing countries. Large dams typically cost several billion dollars and require extensive planning to complete, and in the past these plans have been blamed for overwhelming fragile economies.

A new touchstone in this debate came out earlier this year, in a widely cited study from researchers at Oxford University. Looking at nearly 250 large dams dating back as far as the 1920s, they found pervasive cost and time overruns.

“We find overwhelming evidence that budgets are systematically biased below actual costs of large hydropower dams,” the authors wrote in the paper’s abstract.

“The outside view suggests that in most countries large hydropower dams will be too costly … and take too long to build to deliver a positive risk-adjusted return unless suitable risk management measures … can be affordably provided.”

Instead, the researchers encouraged policymakers in developing countries to focus on “agile energy alternatives” that can be built more quickly.

On the other side of this debate, the findings were attacked by the International Commission on Large Dams, a Paris-based NGO, for focusing on an unrepresentative set of extremely large dams. The group’s president, Adama Nombre, also questioned the climate impact of the researchers’ preferred alternative options.

“What would be those alternatives?” Nombre asked. “Fossil fuel plants consuming coal or gas. Without explicitly saying it, the authors use a purely financial reasoning to bring us toward a carbon-emitting electric system.”