This is the second in a three-part series on the U.S. minimum wage. For more detailed information and data, just click on the hyperlinks within the story. 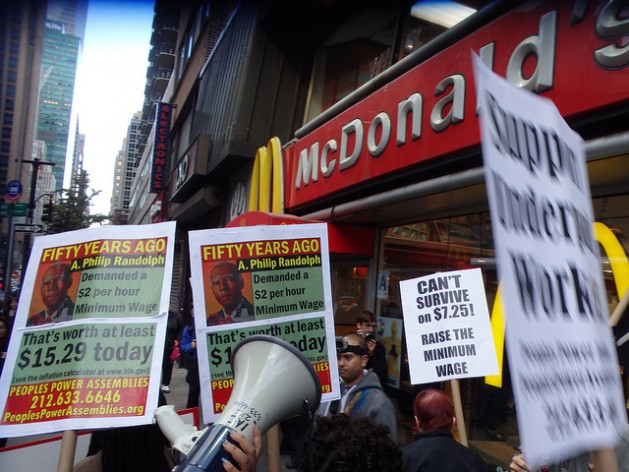 SEATTLE, Aug 11 2014 (IPS) - In 1958, when New York State was considering raising its minimum wage, merchants complained that their profit margins were so small that they would have to cut their work forces or go out of business.  In 2014 in Seattle at hearings on a proposed minimum wage increase, some businesses voiced the same fears.

A national minimum wage was established in the United States in 1938.  Since then, Congress has increased it every few years, although since 1968 it has fallen far behind inflation and productivity growth.  By 2015, over half of the states and many localities will have raised local minimum wages above the federal level. 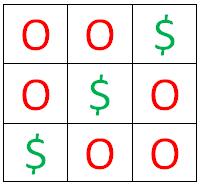 Each time such raises are proposed, bitter debates break out over the potential effects.  Somehow, though, economic devastation has been repeatedly averted.

What actually happens when the minimum wage increases moderately is that total expenses across all industries go up a tiny amount, usually less than one percent.  So the wage hike has little or no effect on the great majority of businesses.  The higher costs are absorbed mainly through tiny price increases, reductions in turnover and increases in productivity.

Historically, the yearly average for recent local minimum wage increases has been 16.7 percent.  But some have been far higher.  For example, in 1950 the national minimum wage jumped 87.5 percent from 40 to 75 cents. And in 2004, the city of Santa Fe, New Mexico, raised its minimum from 5.15 to 8.50 dollars, a 65 percent increase.

Even after Santa Fe’s big raise, the average resulting cost increase for all businesses was around one percent.  For restaurants, it was a little above three percent. [More]

The small impact of raising the wage floor may be surprising to those unfamiliar with the historical record.  But the accounting is straightforward.  Nationally, only 4.3 percent of all workers earn the federal minimum wage or lower; perhaps two or three times that number would have their wages lifted by a moderate minimum wage hike.

The average raise will be somewhere around half of the difference between old and new minimums, because most affected wages will fall somewhere in between.  As a result, the total growth in payroll is small for most businesses.  And payroll, in turn, averages only about one-sixth of gross revenues for all industries nationally. [More]

Because total cost increases for most businesses are minimal and can be covered by other adjustments, moderate minimum wage raises’ effects on low-wage employment have been close to zero.  This is the broad consensus of two decades of rigorous empirical studies at national, state and local levels.

Crunching the numbers for a small business

To get a concrete sense of how raising the wage floor plays out, a little arithmetic goes a long way. Let’s take a hypothetical example of a big raise of 50 percent in one year, from 10 to 15 dollars.

We’ll zoom in from macro to micro and crunch some simplified numbers for a typical small business that employs 24 workers. Six of them make below or equal to the new minimum: one each makes 10, 11, 12, 13, 14, and 15 dollars. The other 18 employees make an average wage of 20 dollars, and all workers work 2,000 hours per year. The total payroll of this company is 20 percent of its gross revenues and its profits are 5 percent.

The average pre-increase wage of the five workers getting a raise is 12 dollars per hour, 10 dollars through 14 dollars divided by five, and their average raise is 3 dollars. This computes to a 25 percent - not 50 percent - average raise for the five covered workers. For the total payroll, this represents an increase of 3.45 percent.

The total impact of a minimum wage increase of 50 percent on this hypothetical business, then, is to raise its total expenses 0.69 percent of gross revenues, or less than one percent.

Nationally across all industries, the proportion of payroll to gross revenues is smaller, 16.8 percent rather than 20 percent. And most yearly minimum wage increases have been far less than 50 percent – an average of 16.7 percent yearly for local ordinances – probably putting the percentage of affected workers closer to 10 percent than 25 percent. Rounding up, for a 20.0 percent nominal minimum increase to 12 dollars for the same sample payroll, the average for the two workers receiving raises will be 14.3 percent, yielding a rise in total payroll of 0.69 percent and in total expenses of 0.14 percent of gross revenues.

If we factor a ripple effect into our 50 percent-raise example, spillover wages that keep at least a 0.25 dollar differential between the new levels - 15 dollars, 15.25, 15.50, etc. - would raise the total payroll increase from 3.23 percent to 4.43 percent, and the total increase in business expenses over revenues from 0.69 to 0.89 percent of gross revenues. Applying a 0.50 dollar ripple differential to a 20 percent minimum wage increase for the same data, the total payroll increase would be 1.15 percent and the total expenses increase would be 0.23 percent of revenues.

A comprehensive study of state minimum wage increases in the U.S. found “no detectable employment losses from the kind of minimum wage increases we have seen in the United States”, including for the accommodations and food services sector.  Two recent meta-studies of the past two decades of research, and examinations of increases in cities including Santa Fe, San Francisco and San Jose, also found no discernable negative effects on employment for low-wage workers.

As Harvard economist Richard Freeman put it, “The debate is over whether modest minimum wage increases have ‘no’ employment effect, modest positive effects, or small negative effects.  It is not about whether or not there are large negative effects.”

A letter to the President and Congress signed by 600 economists in support of raising the national minimum wage to 10.10 dollars cited “the weight of evidence now showing that increases in the minimum wage have had little or no negative effect on the employment of minimum-wage workers”.

Even The Economist, the influential British neoliberal magazine, recently observed: “No-one who has studied the effects of Britain’s minimum wage now thinks it has raised unemployment.” [More]

In worst cases where an employer cannot adjust to payroll increases with price increases or efficiencies, the response will more likely be to reduce hours slightly than to cut jobs, because of the costs and disruption of layoffs.  However, any increase in wages large enough to prompt a reduction in hours would likely be big enough that the paychecks of workers receiving it would still come out ahead.

In this situation, most businesses maintain some hierarchy, with the new minimum pushing up the wage levels just above it by small amounts.  But this “ripple effect” adds only a little to total payroll costs.  One study found that a 2004 increase of 19.4 percent in the Florida state minimum caused an average cost increase for businesses, from both mandated raises and ripple effects, of less than one-half of 1 percent of sales revenues. [More]

Only one sector has significantly higher concentrations of low-wage workers and a larger proportion of payroll expenses: accommodations and food services.  It is not a major part of the economy in most places: nationally it accounts for 2.2 percent of sales and 3.6 percent of payroll.  In these industries, 29.4 percent of workers are paid within 10 percent of the minimum wage.  The rule of thumb for restaurant payroll is about one-third of total revenues, twice the overall proportion.

Even for hotels and restaurants, however, the rises in operating costs are still covered mainly by modest price increases and significant reductions in turnover.  Many businesses in this sector have enough flexibility to raise prices without reducing revenues, especially when competitors face the same wage increases. [More]

Businesses can also compensate for payroll growth through reductions in benefits or training, and improvements in work processes or automation.  Some employers may also accept a small reduction in profits until the wage increases are absorbed.

Even given these multiple channels for adjustment, there are often small businesses who find it hard to cover a minimum wage increase.  In recognition of this, most local minimum wage laws either exempt smaller firms and non-profits or phase in increases more slowly for them. [More]

In the broader economy as well, raising the wage floor may have positive effects.  Increased spending prompted by higher wages can stimulate growth in low-wage workers’ neighbourhoods.

Rising minimum wages also often reduce government spending on poverty programmes. Contributions to unemployment insurance, Social Security and Medicare rise with higher incomes.  Any positive or negative effects, though, will tend to be small-scale relative to the overall economy. [More]

In an era of secular stagnation and political stalemate, minimum wage increases offer an effective, politically popular, and positively motivating way to reduce income inequality from the bottom up, without reducing low-wage employment.