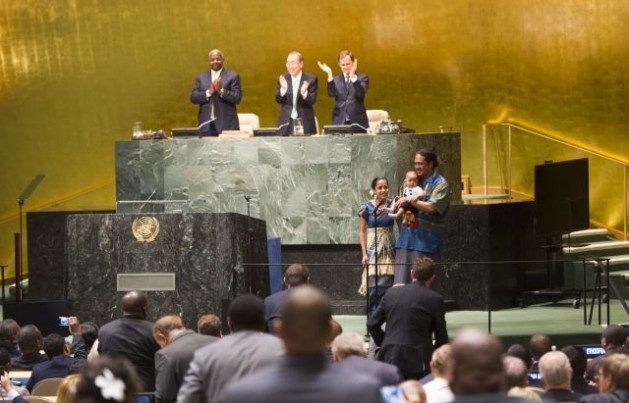 Kathy Jetnil-Kijiner, a member of civil society from the Marshall Islands, received a standing ovation at the opening of the U.N. Climate Summit 2014 for her poem addressed to her daughter. Credit: UN Photo/Mark Garten

UNITED NATIONS, Sep 24 2014 (IPS) - Speaking to more than 120 heads of state at the U.N. Climate Summit, actor and newly appointed U.N. Messenger of Peace Leonardo DiCaprio made clear the long-ranging impact of the attendees’ decisions.

“You will make history,” he said, “or you will be vilified by it.”

Tuesday’s climate summit was not a part of the U.N. Framework Convention on Climate Change (UNFCCC) negotiation framework. Instead, it was a special event convened by Secretary-General Ban Ki-moon to catalyse public opinion and increase political will for a binding climate agreement to be negotiated in Paris at the end of 2015.

“This mixture of governmental, business, cities, states [and] civil society engagement is certainly unprecedented and it offers a chance to open the climate change discussion at a heads of state level as never before,” said Jennifer Morgan, director of the climate and energy programme at the World Resources Institute (WRI), in a statement before the summit.

The secretary-general opened the summit by exhorting leaders to make substantial commitments to mitigate climate change.

“Climate change is the defining issue of our age,” he said. “We must work together to mobilise markets” and “commit to a meaningful, universal climate agreement in Paris in 2015.”

Representatives from small island states lamented that their countries would be underwater in only a few decades, while African leaders pointed out the growing number of climate refugees.

U.S. President Barack Obama announced that all future U.S. investments in international development would consider climate resiliency as an important factor. He also said that the U.S. would meet its target of reducing carbon emissions in the range of 17 percent below 2005 levels by the year 2020.

“We recognise our role in creating this problem. We embrace our responsibility to combat it,” Obama said. “We will do our part and we will help developing nations to do theirs.”

“But we can only succeed in combating climate change if we are joined in this effort by every nation, developed and developing alike. Nobody gets a pass.”

While some were disappointed at Xi’s absence, the fact that such a high-ranking Chinese official would speak of the necessity of climate change mitigation was cause for optimism.

In a reaction statement, WRI’s Jennifer Morgan said that “China’s remarks at the Climate Summit go further than ever before. Vice Premier Zhang Gaoli’s announcement to strive to peak emissions ‘as early as possible’ is a welcome signal for the cooperative action we need for the Paris Agreement.”

Midway through the day, the secretary-general was insistent that real progress was being made.

“This summit is not about talk,” he said. “The climate summit is producing actions that make a difference.”

One of the most concrete things that nations can do to combat climate change is to make pledges to the Green Climate Fund.

The Green Climate Fund is a UNFCCC mechanism designed to transfer money from developed countries to developing countries, to build climate resilience.

Still, these efforts do not nearly close the climate resilience gap between rich and poor states.

Bolivian President Evo Morales voiced a common frustration in his statement on behalf of the G77 and China, a group of developing countries.

“Developing countries continue to suffer the most from the adverse impacts of climate change… even though they are historically the least responsible for climate change,” he said.

It’s easy “to get caught in the zero-sum game” when talking about steps to mitigate climate change, David Waskow, head of WRI’s International Climate Initiative, told IPS. However, “one of the things that was heard frequently today from the podium was the recognition that climate action and economic growth and development can go hand in hand.”

Historical responsibility is a concern, he said, but it should not stop poor countries from recognising that “there are paths forward on climate action that can in fact be beneficial for development.”

Waskow pointed out that renewable energy will soon be just as cheap as fossil fuels in many countries, and could provide significant development benefits in rural areas far from the main electricity grid.

In addition to the climate summit’s main speeches, numerous side events took place, including thematic debates on the economic case for action and on climate science. A special session entitled “Voices from the Climate Front Lines” highlighted the experiences of children, youth, women and indigenous peoples in building resilience to climate change.

Around 100 climate-related events are taking place in New York between Sep. 22 and 28 as part of the Climate Week NYC campaign.

Buses carried in marchers from across the United States. Solidarity marches and events occurred in 166 countries.

Despite the strong turnout, many climate supporters fear that the hype surrounding the summit and the 2015 Paris conference will amount to nothing more than it did in 2009, when hopes of a climate agreement in Copenhagen fizzled.

For the 2015 Paris agreement to succeed, negotiators will need a “clear, focused and strong draft agreement” by the end of the U.N.’s climate change conference (COP20) in Lima this December, said COP20 president and Peruvian environmental minister Manuel Pulgar-Vidal in a press call.

Major economies will need to come forward by March 2015 with their proposed contributions to the Paris framework.

In his remarks at the climate summit, Al Gore put forward his take on what was necessary for a successful climate treaty.