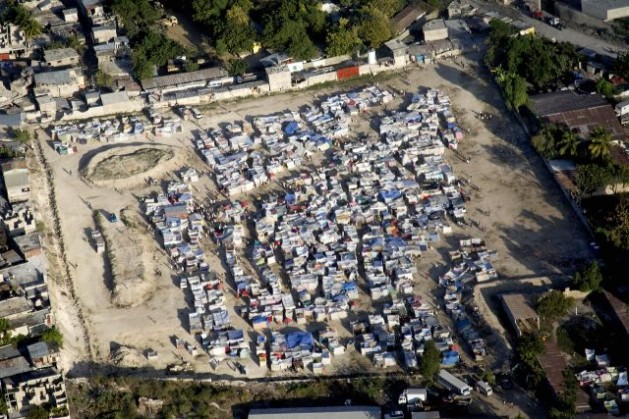 Aerial view of a makeshift camp in Port-au-Prince. Apart from reports of cholera being introduced into Haiti by Nepalese peacekeepers following the 2010 earthquake, environmental problems were created by the distribution of tens of thousands of non-biodegradable tarpaulin tents which needed to be replaced every few months. Credit: UN Photo/Marco Dormino

When heavy rains caused nearly 20 million dollars in losses in Diego Martin, western Trinidad, in 2012, emergency responders moved rapidly to provide relief to affected residents, some of whom lost their homes.

An estimated 50,000 trees would be needed to offset the carbon emissions from Haiti's discarded tents if they were left in landfills.

However, just under two weeks later, Diego Martin was again inundated, this time due to a tropical storm.

A newly released report by the Trinidad and Tobago Red Cross Society (TTRCS) raises the possibility that the second flooding may have partly been due to the relief work done by the emergency responders.

“In addition to the intense rainfall, one of the major contributing factors to the Diego Martin flooding was the clogging of waterways. Waste collection services immediately following the disaster were restricted… Use of [eco-friendly, biodegradable] materials could have helped negate the possibility of flooding.”

The TTRCS’ report, entitled “Green Response: A Country Study”, was presented by the head of Trinidad and Tobago’s Office of Disaster Preparedness and Management (ODPM) to a recent meeting of the Association of Caribbean States (ACS).

It was prepared following a feasibility study “on how to reduce, in a sustainable way, the environmental impact of the products and technologies used in response to and recovery from disasters.”

Trinidad and Tobago decided to undertake the study following an ACS meeting in 2011 where the issue of greening the region’s responses to natural disasters was raised for consideration.

Greening disaster relief efforts has become a major concern internationally, since as the Green Recovery and Reconstruction Toolkit notes, while “DRR (Disaster Risk Reduction) seeks to reduce the risk of harm from disasters… the implementation of activities defined by disaster risk assessments, or by interventions presumed to reduce risk, itself has a risk of doing harm if the activities do not address environmental sustainability.”

Hence, the International Federation of Red Cross and Red Crescent Societies (IFRC) report notes that organisations heavily involved in such work are “considering both current and future disaster and climate change risks and including various measures to address them, in recovery programming.”

The need for such considerations was particularly evident in Haiti following the 2010 earthquake that took more than 200,000 lives.

Apart from reports of cholera being introduced into Haiti by Nepalese peacekeepers who were deployed to help in recovery efforts following the earthquake, there was also the environmental problem created by the distribution of tens of thousands of non-biodegradable tarpaulin tents which needed to be replaced every few months.

The IFRC Practice Note Report on Haiti notes that 50,000 trees would be needed to offset the carbon emissions from the discarded tents if these were left in landfills.

“The key issue,” said ACS’s director of Transport and Disaster Risk Reduction, George Nicholson, “is having to find a way to ensure that regardless of the things we do, whether work activities or specific activities for disaster response, to ensure that the things have the least impact on the environment.”

The Trinidad and Tobago government is committed to incorporating climate change and  environmental considerations into all its programmes. So when the question of a green response to disaster management came up for consideration at the ACS, the country offered to do the feasibility study for what has been dubbed the Green Response.

The ACS has worked with the ODPM, which has lead responsibility for the initiative in the country, the IFRC, and the TTRCS on the study.

Nicholson said that pursuant to the study’s findings, other ACS member countries “may look to see what was done by Trinidad and Tobago and then adapt or adopt their mechanisms.”

TTRCS’ Stephan Kishore said greening disaster relief efforts would involve activities such as locally manufacturing and pre-positioning relief supplies, so as to reduce the carbon footprint involved in shipping items from China, where most of the country’s relief supplies now come from.

It would also involve simple procedures such as using paper, cloth, or buckets rather than plastic to wrap relief supplies, and wrapping items, like soap, in bulk rather than in individual wrappings. Further, green relief efforts would encourage recycling of items and use of solar energy rather than fossil fuels.

However, a major consideration in greening disaster relief efforts is the legislative framework governing disaster relief organisations. Nicholson said the feasibility study looks at Trinidad and Tobago’s “legislative processes, its operational systems to see where you can get benefits out of being more green in your approach.”

“All of them have totally different legislative environments, so you cannot write one thing and say we can establish best practices. Countries will look at that checklist of best practices [from the study] and see how best they can adopt their own environment to suit.”

With the feasibility study phase complete, the next stage of the Green Response is to identify or develop green disaster response processes and products from the region, which may include encouraging local manufacturers to begin producing recyclable items that can be used during a natural disaster.