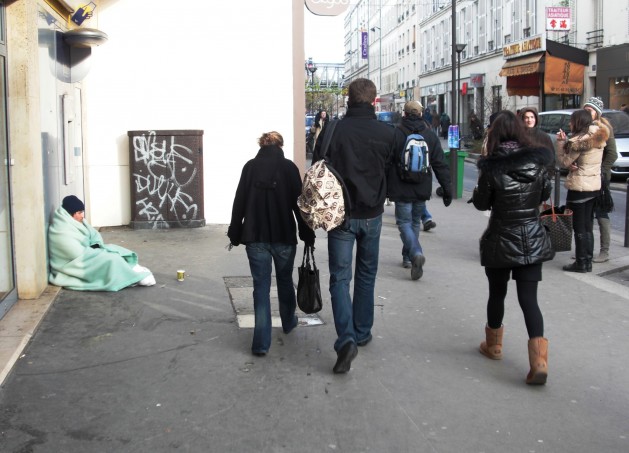 PARIS, Dec 12 2014 (IPS) - For years, many policy makers, including economists, have clung to the belief that if states do nothing to boost income equality, market forces will cause wealth to trickle down to the poorest citizens and contribute to overall growth.

That theory is now being increasingly debunked as experts affirm that the broadening gap in income is creating far-ranging problems for many societies.

In a new report  published on Dec. 9, researchers at the Paris-based Organisation for Economic Cooperation and Development (OECD) argue that “reducing income inequality would boost economic growth”.

Their research shows that countries where income inequality is decreasing actually “grow faster than those with rising inequality,” and the analysts would like to see governments take stronger action to reduce inequity.

“Today, the richest 10 percent of the population in the OECD area earn 9.5 times the income of the poorest 10 percent; in the 1980s, this ratio stood at 7:1 and has been rising continuously ever since” – OECD

“The single biggest impact on growth is the widening gap between the lower middle class and poor households compared with the rest of society,” says the report titled ‘Trends in income inequality and its impact on economic growth’, and “education is the key: a lack of investment in education by the poor is the main factor behind inequality hurting growth.”

According to Michael Förster, a senior analyst in the OECD’s Social Policy division, one reason “the poor and lower middle classes are being left behind in unequal societies” is that they do not have the resources to spend on their own or their children’s education, compared with wealthier citizens,.

He said that governments needed to revise strategies that are based on outdated economic theories.

“The common assumption used to be that the more you did to enhance equality, the more you would hinder growth,” he argued. “So the idea was that if you take too much from the top earners, through taxes, you will have less growth. We haven’t found evidence for that. What we have found is that increasing inequality is bad for growth.”

For example, rising inequality is estimated “to have knocked more than 10 percentage points off growth in Mexico and New Zealand over the past two decades up to the Great Recession,” says the OECD.

Meanwhile, in the United Kingdom, Italy and the United States, the “cumulative growth rate would have been six to nine percentage points higher had income disparities not widened.”

OECD Secretary-General Angel Gurría said that this “compelling evidence” proves that addressing high and growing inequality is “critical to promote strong and sustained growth” and needs to be at the centre of global policy discussions.

“Countries that promote equal opportunity for all from an early age are those that will grow and prosper,” he added.

However, some scholars maintain that the consequences of inequality are hard to prove. American economist Jared Bernstein and others have pointed out that it is difficult to establish a firm connection between the inequities in education and economic growth.

These analysts acknowledge that wealthier parents do spend more overall on educational tools and “goods”, and that children from rich families often study at elite institutions in contrast to children from poor backgrounds who may attend lower-quality schools, but they have disagreed on the social or economic effects.

With the “new evidence”, OECD researchers say that the main means through which inequality affects growth is by “undermining education opportunities for children from poor socio-economic backgrounds, lowering social mobility and hampering skills development.”

“People whose parents have low levels of education see their educational outcomes deteriorate as income inequality rises. By contrast, there is little or no effect on people with middle or high levels of parental educational background,” the OECD said in a statement.

According to researchers, anti-poverty programmes will not be enough to create greater equality of opportunities in the long term.  Essential measures will include “cash transfers and increasing access to public services, such as high-quality education, training and healthcare”, the OECD says.

Förster stressed that the inequality study focused on income and not wealth. But recent discussions have centred on both, particularly in France since the election of Socialist President François Hollande in May 2012.

Soon after his election, Hollande announced plans for a 75 percent tax on all income over one million euro, and a watered-down version of the plan was approved by French courts a year ago, even as many wealthy families fled to Belgium and elsewhere.

Economists of different political colours have argued about whether the increased taxation is good for the economy, and the debate has grown more heated with last year’s publication of Capital in the Twenty-First Century by renowned French economist Thomas Piketty.

A lecturer in Paris and internationally, Piketty advocates a global tax on wealth. He has carried out studies showing that income inequality has grown in many countries, alongside 30 years of declining tax levels.

The gap is particularly marked in the United States, but even in “egalitarian” France, the top one percent earned an average of 30,000 euro monthly in 2010, compared with 1,500 euro per adult of the poorest 50 percent.

According to the OECD, a similar situation exists in many of its 34 member countries, which include European nations and others such as Mexico, Chile and the United States.

“Today, the richest 10 percent of the population in the OECD area earn 9.5 times the income of the poorest 10 percent; in the 1980s, this ratio stood at 7:1 and has been rising continuously ever since.”

Bucking the trend, income inequality has been falling in Chile and Mexico, but the incomes of the richest are still more than 25 times those of the poorest in these two countries.

The OECD’s Latin American Economic Outlook 2015, produced with regional partners and also launched on Dec. 9, focuses on the role of education and skills, and experts said more needed to be done to “raise educational standards and address persistent and substantial socioeconomic inequalities.”

Förster told IPS that the organisation hoped governments would consider the findings as a basis to change policy, “otherwise we won’t get out of the current situation.”