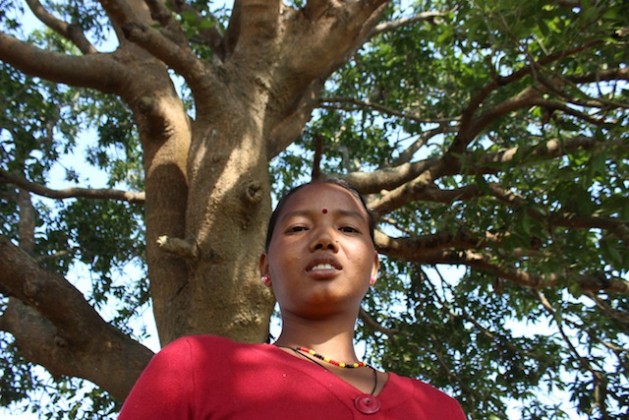 Every morning Raj Kumari Chaudhari offers prayers to this mango tree where she took shelter during the floods in 2014 in mid-west Nepal. Credit: Mallika Aryal/IPS

BARDIYA, Nepal, Feb 26 2015 (IPS) - Every morning, Raj Kumari Chaudhari walks from her home to the other end of Padnaha village, located in the Bardiya district of mid-west Nepal, to a big mango tree to offer prayers.

The tree is majestic, its branches spreading as far as the eye can see. “This tree doesn’t bear fruit, but it saved my family from death,” she says. In her eyes, this single tree did more for her family at their time of need than the government of Nepal.

“We’re no strangers to rebuilding our lives […] but I hope my daughters won’t have to do it over and over again, like we did.” -- Raj Kumari Chaudhari, a survivor of the floods that swept away her village in mid-West Nepal in August, 2014
On the night of Aug. 14, 2014, Chaudhari lost her home when a big flood washed her entire village away. Her husband grabbed their eldest daughter, while she carried her twins on her shoulders, and ran.

When they reached the other side of the village, they realized there was no escape. They climbed the nearest tree and took shelter. In a matter of minutes 11 other people from her village had climbed the tree.

“My six-month old baby was the youngest amongst us, I tied him with my shawl so he wouldn’t fall,” says Kalpana Gurung, 27.

Bardiya, one of three districts in mid-west Nepal, was the hardest hit by last year’s flood; the District Disaster Relief Committee of Bardiya says more than 93,000 people were affected.

The gushing waters killed 32 and 13 still remain missing. Almost 5,000 people were affected in Padnaha village where the Chaudhari family lived.

The year 2014 was considered the deadliest on record in Nepal in terms of natural disasters. According to the Ministry of Home Affairs 492 people were killed and over 37,000 households affected by disasters between April 2014 and February 2015.

Still, experts say, the government hasn’t formulated a long-term response for those like the Chaudhari family who survived these catastrophic events. 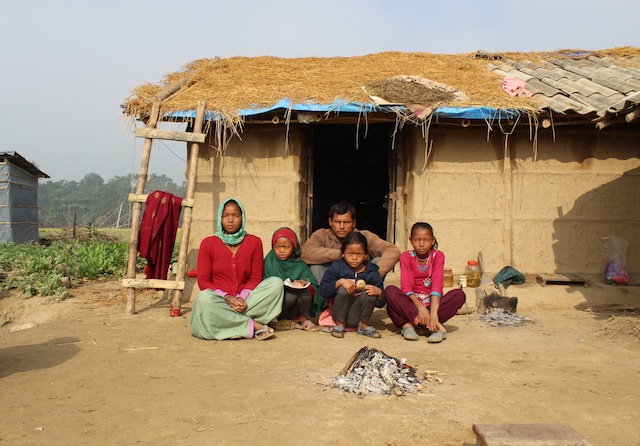 Raj Kumari and Hira Lal Chaudhari, their 11-year-old daughter, and their eight-year-old twins survived the August 2014 flood in mid-west Nepal by climbing a mango tree and waiting for the waters to recede. Credit: Mallika Aryal/IPS 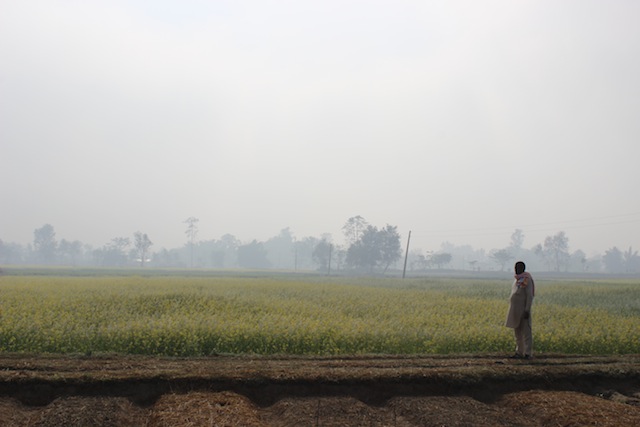 It took the community of Padnaha five months to get their lives back together. Now 12 families have rebuilt their homes. “This entire village was like a desert after the floods,” Raj Kumari Chaudhari, one of the survivors, recalls. Credit: Mallika Aryal/IPS

“The government has no direction, no plans for rehabilitating survivors – those who lost [their] lands essentially became stateless,” says Madhukar Upadhya, a watershed and landslide management expert.

Living on a knife’s edge in disaster-prone Nepal

Chaudhari’s family and the majority of her neighbours are from the Tharu community, indigenous to western Nepal. They are former ‘kamaiya’, meaning people affected by the oppressive system of bonded labour that was abolished by law only in 2002.

After being liberated, her family were evicted from their homes by their former masters and lived out in the open for years. Two years ago, the government finally resettled them in Padnaha.

“It took us a long time to build our homes, the kids were finally feeling settled, and then the floods washed away everything,” Chaudhari tells IPS.

After spending 24 hours on the tree branches, water swirling below, Chaudhari and her family were finally able to come down and rush to a school nearby. When the water level receded, they saw that everything had been washed away.

“We may have lost our homes and belongings, but unlike other survivors of floods and landslides, we still had our lands to come back to,” says 18-year old Sangita, another tree survivor.

With assistance in the form of raw materials from Save the Children, and Nepal’s 13-day Cash for Work programme that provided them 3.5 dollars a day for their labour, the community started to rebuild.

In a matter of a few days 12 households cleared away the debris and erected their huts. 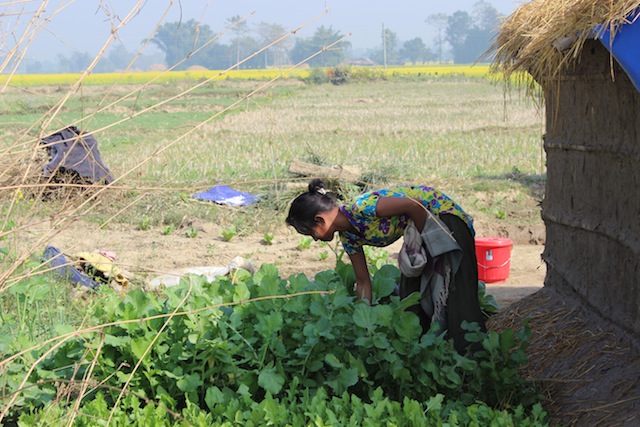 Kalpana Gurung inspects her vegetable garden and hopes she will harvest enough green leafy vegetables for her family this spring. As a nursing mother, she is worried she won’t be able to provide enough nutrition to her nine-month-old baby. Credit: Mallika Aryal/IPS 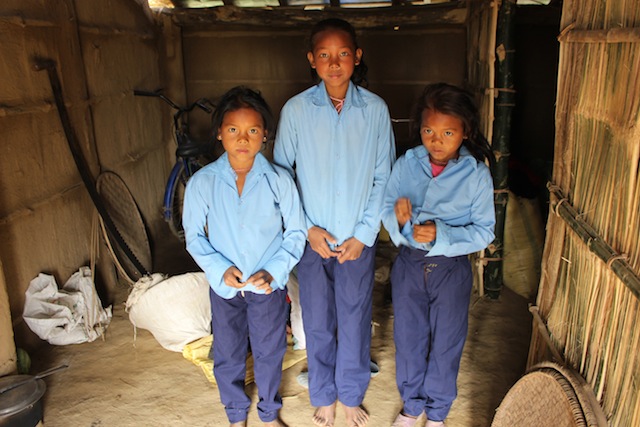 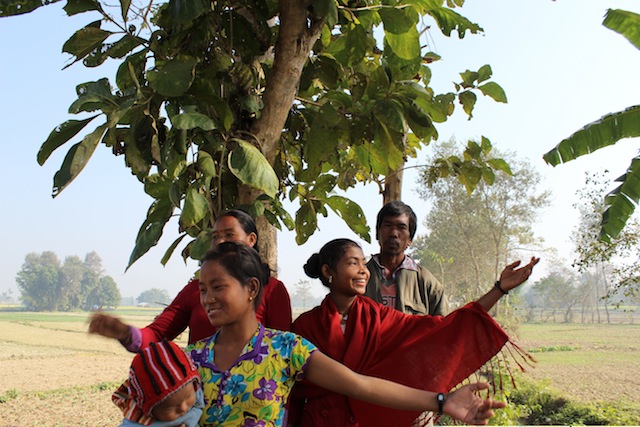 Eighteen-year-old Sangita remembers the night when she woke up to water surrounding her bed. Pointing at the tree where she took shelter she says, “That tree over there saved my life, but I want to forget about that horrible night.” Credit: Mallika Aryal/IPS

Today, Chaudhari has planted some vegetables in the garden, an additional source of nutrition for her family. She is worried that what happened last year may happen again and she realizes now that she has to be prepared.

Climate experts say that the little model community is not sustainable – changes in weather patterns mean that every monsoon is likely to bring floods and even landslides to vulnerable regions of Nepal.

A study released last year by the Climate and Development Knowledge Network (CDKN) found that climate variability and extreme weather events costs the government of Nepal the equivalent of between 1.5 and two percent of its gross domestic product (GDP) each year.

Twelve massive floods over the last four decades have cost every single affected household, on average, the equivalent of 9,000 dollars.

Considering that the country’s average income per family was about 2,700 dollars in 2011, this represents a major burden, borne primarily by the poor – like the Chaudhari family – who live in disaster-prone areas.

Every year since 1983, floods in Nepal have caused an average of 283 deaths, destroyed over 8,000 houses and left close to 30,000 affected families to deal with the fallout of the disaster.

As Chaudhari gazes off into the distance towards their sacred mango tree she says, “We’re no strangers to rebuilding our lives […] but I hope my daughters won’t have to do it over and over again, like we did.”