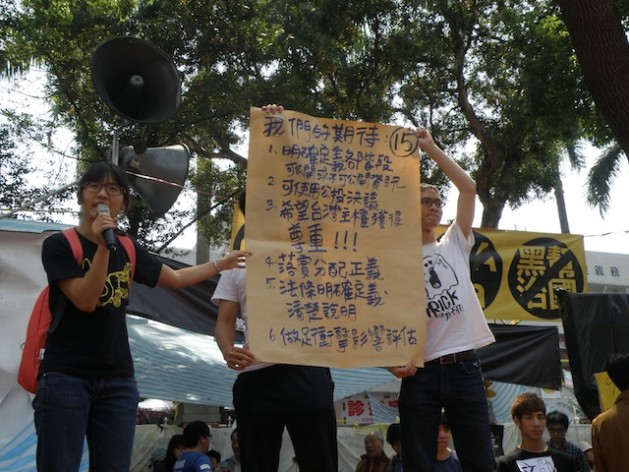 Participants in a forum outside the national legislature in Taipei City during the ‘Sunflower’ occupation in April, 2014, call for the principles of distributional justice and direct democracy to be inserted into Taiwan’s constitution. Credit: Dennis Engbarth/IPS

TAIPEI, Feb 5 2015 (IPS) - “The clock is ticking.” Those were the words of Taiwan Democracy Watch Director Yeh Chueh-an on Feb. 4, as scores of civil society organisations in the capital, Taipei, began a countdown for a citizen-based rewriting of Taiwan’s constitution aimed at safeguarding human rights and social equity.

Composed of over 20 human rights and social activist organisations, the Alliance for the Promotion of a Citizen Constitutional Council has launched a campaign for an overhaul of Taiwan’s political framework that, for the first time, could feature the “bottom–up” participation of the country’s 23 million citizens.

“Citizens, not political elites, must be the subjects of constitutional reform." -- National University Professor of Political Science Chen Chun-hung
The digital clock was set at 116 days and 12 hours – meaning a deadline of May 31, marking the end of the current session of Taiwan’s parliament, the Legislative Yuan.

Proposed constitutional amendments must first be approved by three fourths of Taiwan’s 112-seat national legislature and announced six months in advance of a national referendum in which at least half of Taiwan’s over 18 million eligible voters must vote “yes” if the changes are to be ratified.

Draft amendments to the constitution – including one prepared by opposition legislator Cheng Li-chun  – are likely to include safeguards on human dignity, freedom of residence, assistance for the destitute, better working conditions, and confidential communications and privacy.

On Jan. 12, the Alliance to Promote a Citizen Constitutional Council proposed a two-stage process in which a ‘national affairs conference’ would bring political parties, legislators, civil society organisations and other civic leaders together to brainstorm how best to bring about grassroots-based constitutional changes.

“Citizens, not political elites, must be the subjects of constitutional reform,” said National University Professor of Political Science Chen Chun-hung.

“We must set in place robust procedures for ordinary people to participate and feel a close connection and involvement in this process if it is to succeed,” added Chen, also a director of Taiwan Democracy Watch.

The current constitution of the ‘Republic of China’ (Taiwan’s official name) was drafted in mainland China, and imposed on Taiwan by the Chinese Nationalist Party (Kuomintang or KMT) government of the late autocrat Chiang Kai-shek after the KMT lost the Chinese civil war in the late 1940s.

Its modest provisions for democratic and citizen rights were deep-frozen during four decades of martial law rule through the late 1980s.

Seven sets of revisions through “additional articles” spurred by Taiwan’s first native-born president Lee Teng-hui in the 1990s left Taiwan with a democratically elected but unwieldy political system in which power and responsibility are not commensurate.

Although directly elected, the president has no direct role in state administration; the premier or head of government is appointed by the president and is not responsible to the national legislature; and no feasible methods exist to resolve deadlocks between the executive and legislative branches.

“We have a system in which the president can do what he wants with impunity and there is no way that the people or even the legislature can stop him no matter how low his support is or how unpopular his policies [are],” said Economic Democracy Union convenor Lai Chung-chiang.

“The existing governmental system is unable to solve the pressing and urgent problems faced by the people, including issues impinging on their right of survival [such as] lax food safety, wealth inequality, threats to their right of residence and inadequate social welfare,” added Taiwan Labour Front Secretary-General Sun Yu-lien.

Once considered impossible due to opposition by President Ma Ying-jeou and his hard-line KMT government, the question of constitutional re-engineering was re-energised during the past year of social and political activism, punctuated by the Mar. 18-Apr. 10 ‘Sunflower Movement’ occupation of Taiwan’s national legislature.

The occupation was touched off by Ma’s insistence on ramming through the legislature a bill to ratify a controversial Cross-Strait Trade in Services Agreement with China despite widespread concerns that the covertly negotiated pact would harm local industries and employment, exacerbate wealth inequalities and undermine democratic freedoms.

The campaign, which included a mass rally of over 300,000 on Mar. 30, stymied the pact’s ratification and was followed by street demonstrations in late April 2014 that scuttled plans to complete a bitterly contested 10- billion-dollar nuclear power plant.

During the occupation, activists called for a Citizen Constitutional Council and held democratic deliberations among several thousand citizens on its agenda.

But it was not until the ruling KMT suffered a severe electoral defeat in nationwide mayoral elections this past November that the feasibility of constitutional change emerged on the immediate political agenda.

A survey of 1,069 Taiwanese adults released last December by Taiwan Thinktank showed that nearly 60 percent of those polled saw the mayoral elections as a vote of no confidence in the Ma government and its pro-China and pro-conglomerate policies.

The debacle triggered Ma’s resignation from the KMT chairmanship on Dec. 3. Although Ma remains president, the moderate New Taipei City Mayor Chu Li-lun replaced him as ruling party leader on Jan. 19 and called for constitutional amendments to move Taiwan toward a cabinet system of government.

A research fellow at the Academia Sinica Institute of Jurisprudence, Huang Kuo-chang, told IPS that the March occupation exposed to the Taiwan people the grave dysfunction of the political system, adding, “The Nov. 29 elections have finally forced the KMT to consider the necessity of constitutional reform.”

In December, the KMT and DPP legislative caucuses formed task forces on constitutional revision, but the two parties remain mainly concerned with revamping the central government structure and the legislative election system.

However, the top priority for social activist and human rights organisations is securing the equivalent of a constitutional Bill of Rights.

As National Taiwan University Professor of Law Chen Chao-ju noted, “[C]onstitutions in other new democracies, such as South Africa, have special provisions to ensure substantive equality and social justice.

“We need to incorporate detailed provisions to protect basic human and social rights from discrimination or infringement by the state and substantive abrogation by government-business collusion,” she added.

Such changes could help people uphold and defend, among other things, their own labour rights, in a country that is consistently failing to provide equally for all its citizens.

Although the unemployment rate fell slightly in 2014 to 3.96 percent, the lowest since the KMT returned to power, joblessness among youth (15-24 years of age) averaged 12.63 percent that same year.

Meanwhile, according to the official Directorate General of Budget, Accounting and Statistics, the share of labour compensation to gross domestic product (GDP) fell by 0.87 percentage points to 44.65 percent in 2013, the second lowest in Taiwan’s history. During the same period, the ratio of enterprise profits to GDP rose by 1.41 percentage points to 33.45 percent.

“The fruits of economic growth have been taken by conglomerates and major stockholders while wages have stagnated and the numbers of working poor have continued to rise,” summed up Taiwan Labour Front Secretary-General Sun You-lien.

All across the spectrum, ordinary citizens and experts on social, economic and political policy are counting down the days for constitutional reform that could usher in an era of democracy and development that many here had started to believe was unattainable.