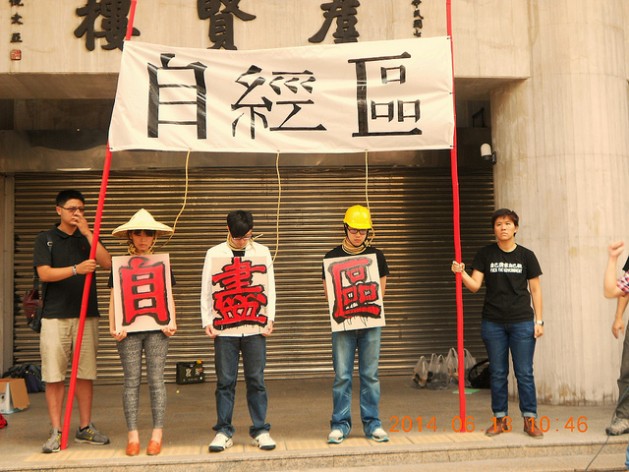 A worker, farmer and doctor are hanged in the “Suicide Zone” outside of Taiwan’s national legislature, in a street theater protest by student groups against government efforts to establish “Free Economy Pilot Zones” across Taiwan. Credit: Dennis Engbarth/IPS

TAIPEI, Sep 11 2014 (IPS) - The Taiwan government’s plan to liberalise tariff-free imports of agricultural produce from China and other countries for processing in free economic pilot zones, which will then be exported as ‘Made in Taiwan’ items, may mean suicide for Taiwanese farmers if approved by the national legislature.

The Chinese Nationalist Party (Kuomintang or KMT) government of President Ma Ying-jeou conceived the Free Economic Pilot Zone (FEPZ) plan in 2012 as a way to urge Taiwanese investors in China to relocate value added operations back to Taiwan, through tax and other incentives.

In early 2013, the KMT government re-packaged the plan to feature components for the promotion of value-added agriculture and international medical services, among others, and submitted required changes in the legal code to implement the plan in a draft Free Economic Pilot Zone Special Act to the KMT-controlled Legislature in December 2013.

“The intention of the Ma government to lift the ban on Chinese agricultural commodities through the FEPZ special act violates his own promise in the 2008 and 2012 presidential elections, but dovetails with Beijing’s objective of cross-strait economic integration." -- Lai Chung-chiang, convenor of the Democratic Front Against Cross-Strait Trade in Services Agreement
The special act offers investors in FEPZs business tax exemptions, tariff-free importation of industrial or agricultural raw materials, eased entry and income tax breaks for foreign professional workers, including from China, and streamlined procedures for customs and quarantine checks, labour safety inspections and environmental impact assessments.

Social movement groups have warned that the China-friendly KMT government aims to use the FEPZ programme as a back door to realise full deregulation of trade between Taiwan and the People’s Republic of China, and avoid the need for legislative ratification of trade pacts after the Sunflower citizen and student occupation movement in March derailed a controversial service trade pact between the two governments.

Lai Chung-chiang, convenor of the Democratic Front Against Cross-Strait Trade in Services Agreement, observed that the Sunflower movement spurred the formation of a consensus in Taiwan that the Legislature should enact a law strictly governing the negotiation of cross-strait agreements before reviewing the ‘trade in services’ agreement or other pacts with China.

Lai told IPS that the core of the FEPZ concept is to arbitrarily grant tariff-free entry for raw materials and products from all countries into Taiwan’s six main seaports and its major international airport in order to display Taiwan’s interest to enter the Trans-Pacific Partnership (TPP) and other regional free trade pacts.

Instead, this act will sell out Taiwan’s economic future, warned Lai, adding, “Our major trade partners will have no reason to engage in negotiations with us to further open their markets as our government will have surrendered all of our bargaining chips even before talks begin.”

“The intention of the Ma government to lift the ban on Chinese agricultural commodities through the FEPZ special act violates his own promise in the 2008 and 2012 presidential elections, but dovetails with Beijing’s objective of cross-strait economic integration,” Lai added.

Despite a high-powered advertising campaign, the Taiwan public is not visibly enthusiastic about the FEPZ plan. Nearly 63 percent of respondents in a poll carried out by the opposition Democratic Progressive Party (DPP)’s Public Survey Center in June said they were worried about the scheme’s impact on Taiwan’s economy.

Labour organisations are leery of further liberalisation of foreign workers, including white-collar professionals from China, while medical and educational organisations object to plans to offer health and educational tourism programmes that would spur the commodification of public services.

“As a Taiwanese farmer, I oppose the use of the ‘Made in Taiwan’ label, for which Taiwan farmers worked so hard, to endorse products made with Chinese raw materials,” Wu Chia-ling, a farmer working with the Yilan Organic Rice Workshop, told IPS.

Tsai Pei-hui, convenor of the Taiwan Rural Front, also said that the FEPZ “value-added agriculture” programme would damage Taiwan’s reputation by “contributing to the exploitation of farmers around the region and the world.”

“Growers of tea in China and Vietnam, coffee in Latin America and cocoa in Africa should not just be workers producing agricultural raw materials for purchase at low prices for processing abroad,” Tsai said, adding that Taiwan has ratified the International Covenant on Economic, Social and Cultural Rights and should not follow in the footsteps of countries that have engaged in exploitative agricultural practices.

However, the most controversial segment is a so-called value-added agriculture plan promoted by Council of Agriculture Minister Chen Pao-chi.

Chen Chi-chung, a professor at the National Chung Hsing University Agricultural Policy Center, stated, “Taiwan may become the first producer of agricultural goods that will permit agricultural produce from all over the world, including China, to be used for processing in its own factories free of tariffs or business taxes.”

Article 42 of the draft special act would fully lift the current ban on import from China of 2,186 types of raw materials, including 830 types of agricultural commodities, while Article 38 would exempt FEPZ enterprises from tariffs, cargo levies and business income taxes. Article 41 would exempt most such commodities from customs or health inspections.

Moreover, makers of processed agricultural goods or foods exported from FEPZs will be able to attach ‘Made in Taiwan’ labels to their products.

Rural Life Experimental Farm Director Liao Chih-heng told IPS that instead of helping farmers cope with the unfair competition from producers in China due to state subsidies and lower labour and environmental costs, the Ma government is inviting such unfair competition into our home market.

Tai Chen-yao, a farmer of squash and lemons in Kaohsiung City in southern Taiwan, told IPS, “If Taiwan sells processed Chinese agricultural goods as Made in Taiwan, food processors as well as farmers will be hurt since there will be no way to guarantee the safety or quality of raw material and thus the food safety for consumers of such products.”

Su Chih-fen, Yunlin County Mayor for the opposition DPP, echoed these sentiments, telling IPS that a rising share of Taiwan farmers, including youth who are returning to the countryside, are absorbing new knowledge and creating innovative agricultural products that can out-compete imports, which may be cheaper but have higher food safety risks.

The value-added agriculture plan would deprive this emerging cohort of new style farmers of access to export markets and divert resources away from assisting the majority of farmers to upgrade, said Su, who is mayor of Taiwan’s agricultural capital.

Su further warned that the government’s plan would effectively punish farmers who kept their roots in Taiwan and have worked to upgrade and grow high quality produce.

In the wake of such widespread criticism, the official National Development Commission (NDC) has announced modifications including dropping the provision that 10 percent of agriculture value-added goods made with raw materials from China could be sold on the domestic market.

However, Chen Chi-chung declared that the changes, along with the NDC’s claim that processed foods made in the FEPZ using imported materials from China or other low-cost suppliers would not enter or affect Taiwan’s domestic market, were deceptive semantics.

Using imported raw agriculture materials, such as tea or peanuts, to make processed food products in Taiwan will surely reduce the demand for domestic agricultural products and thus the income of Taiwan farmers, said Chen.

According to the Council of Agriculture’s statistics, average annual income for a farm household in 2012 was about 33,200 dollars; however, the net income from farming activities was only 7,200 dollars.

Noting that civil society organisations and opposition parties have called for the elimination of Articles 38, 41, 42 and other provisions harmful to the interests of Taiwan farmers, workers and public services, Lai told IPS, “If the KMT pushes passage of this act, it will have to either have to accept major concessions in the final content of the bill or face an intense backlash in civil society and public opinion.”