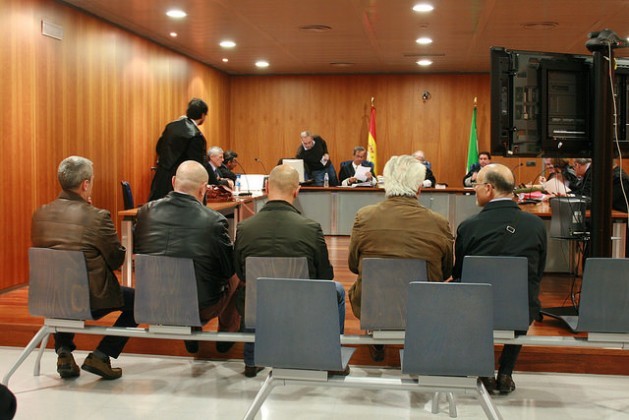 Trial of five police officers for alleged sexual abuse against immigrants held in the detention centre in the southern Spanish city of Málaga. This case is just one of many reported of mistreatment in these centres, whose closure is demanded by human rights groups. Credit: Inés Benítez/IPS

MÁLAGA, Spain, Mar 27 2015 (IPS) - “They mistreat you, they don’t respect you. I’ve seen beatings, suffering, and you can’t defend yourself. When you’re locked in there it’s as if you were in another world,” Salif Sy, a Senegalese man who in 2011 spent eight days in an immigrant detention centre (CIE) in Madrid, told IPS.

Behind the walls of Spain’s eight CIEs, immigrants are frequent victims of abuse and mistreatment by the national police, who are in charge of guarding them, national and international human rights organisations warn.

They also complain about hurdles thrown in the way of investigations of reports of abuse, and about the prevailing impunity.

In the southern city of Málaga, five police officers are on trial for alleged sexual abuse of women held in the local CIE, in 2006. The centre operated in an old military garrison and was shut down when the dilapidated building was condemned in June 2012. A hearing of the trial was held Mar. 5.

“Those who torture still have guaranteed impunity when they abuse people who are in especially vulnerable situations – undocumented immigrants, isolated from their families and friends, without money to pay a lawyer, and without knowledge of Spain’s legal system, let alone international law.” -- Carlos Villán

“The police would hold parties, where they would take advantage of the inmates sexually. It’s disgusting,” Jaime Ernesto Rodríguez, the attorney for three women who are protected witnesses in the case, told IPS. The accused face possible sentences of 27 years. The verdict is expected in April.

“Two of the agents had access to the lists of women who were coming in and they would choose,” said the lawyer for the three women, from Brazil, Honduras and Venezuela, who were deported to their home countries in 2006, despite the opposition put up by their attorney and several organisations.

Spain’s immigration law states that the CIEs are “public establishments of a non-penitentiary nature…for the detention and custody of foreigners subject to deportation orders.” It stipulates that no one can be held for more than 60 days.

But non-governmental organisations say the CIEs are “prisons in disguise,” where human rights violations are rampant.

Their demand that the centres be shut down was bolstered by the position taken by the new government of Greece.

The deputy interior minister of Greece, Yannis Panousis, announced Feb. 14 that the five immigrant detention centres in his country would gradually be closed, after a 28-year-old Pakistani citizen committed suicide in one of the centres the day before.

The latest accusation in Spain was filed on Feb. 3 for the alleged torture of Mohamed Rezine Zohuir of Algeria and Ben Yunes Sabbar of Morocco, who were detained in January in the CIE of the southeastern city of Valencia, lawyer Andrés García Berrio of the legal team of the campaign Tanquem Els Cies (Close the CIEs, in the Valencian language), told IPS.

He said the case is under investigation and that there are photos documenting injuries on the two men’s heads and faces, which the CIE authorities claim were self-inflicted.

In 2014, immigrants held in the CIE filed 40 formal complaints of abuse by police.

“Any complaint of mistreatment should be promptly, exhaustively and impartially investigated,” Amnesty International Spain’s head of domestic policy, Virginia Álvarez, told IPS. “We are concerned about the lack of adequate oversight and accountability mechanisms.”

In November 2014 the United Nations Human Rights Committee asked the Spanish government for explanations in the cases of alleged mistreatment in the CIEs and excessive use of force by the immigration authorities.

Spain’s interior minister, Jorge Fernández Díaz, denied in a Feb. 22 interview that there were cases of torture in the CIEs.

“How could torture happen in the CIEs?” he said. “I would bet my life on the fact that no torture is being committed. And if anyone did commit such a barbaric act, they would be committing a crime. False reports have been made.”

But according to García Berrio, “there is no willingness on the part of the Interior Ministry to resolve this situation.” He also complained about “hurdles being set in the way of the investigations,” citing as examples two cases in which security camera footage that served as evidence “went missing due to supposed technical problems.”

In the CIEs there have been “aberrations,” said Rodríguez, the lawyer. He mentioned the case of the Brazilian immigrant, who is one of the protected witnesses in the trial against the police officers in the Málaga CIE. When she was taken to the centre, she had a high-risk pregnancy, and suffered a miscarriage while awaiting deportation.

Rodríguez filed a complaint against the police for omission of duty to aid a person in distress, which was thrown out.

“Impunity surrounds abuses by police in the CIEs,” the president of the non-governmental Spanish Association for the Human Right to Peace, Carlos Villán, told IPS. He said the agents “have not received adequate training, and they are not warned that torture and mistreatment are prohibited by both Spanish and international law.”

People held in the CIEs have died due to “inadequate detention conditions and lack of medical care,” said Villán, who did not mention a precise number.

“There have been suicides, rapes,” activist Luís Pernía, president of the Platform of Solidarity with the Immigrants of Málaga, an umbrella group made up of some 20 organisations, told IPS. “Many people have suffered all kinds of abuse in Málaga’s CIE for decades, and there is a legal vacuum.”

On Mar. 14, 2014, Spain’s Council of Ministers approved the regulations for the operation of the CIEs. Until then the inmates were in a legal vacuum without specific regulations such as those used to guarantee the basic rights of inmates in prisons.

But Villán believes that despite the regulations, “those who torture still have guaranteed impunity when they abuse people who are in especially vulnerable situations – undocumented immigrants, isolated from their families and friends, without money to pay a lawyer, and without knowledge of Spain’s legal system, let alone international law.”

“There is racism and a lot of suffering in the CIE,” said Salif Sy, who reached Tenerife in Spain’s Canary Islands off the northwest coast of Africa, from Senegal, in a boat in 2006.

A few weeks before he was detained in 2011, Sy, who was heavily involved in different associations where he was living in the southeast Spanish city of Albacete, played King Balthazar in the city’s traditional Three Wise Men parade. Pressure from different organisations and his many friends blocked his deportation.

“We are all immigrants, we are all equals, I have to keep fighting for the people who will come after me,” said Sy, who is married to the Spanish woman who was his girlfriend when he was picked up by the authorities in their home in 2011.

Of the 49,406 foreign nationals detained in 2013 for breaking Spain’s immigration law, 9,002 were held in the CIEs and 4,726 were finally deported, according to the National Mechanism for the Prevention of Torture report published by the ombudsperson’s office in 2014.

Amnesty International’s Álvarez said people are detained in the CIEs “in the full knowledge that they cannot be deported if there is no repatriation agreement with their countries, along with people who are sick, possible victims of people trafficking, or potential asylum seekers; their human rights are being violated.”