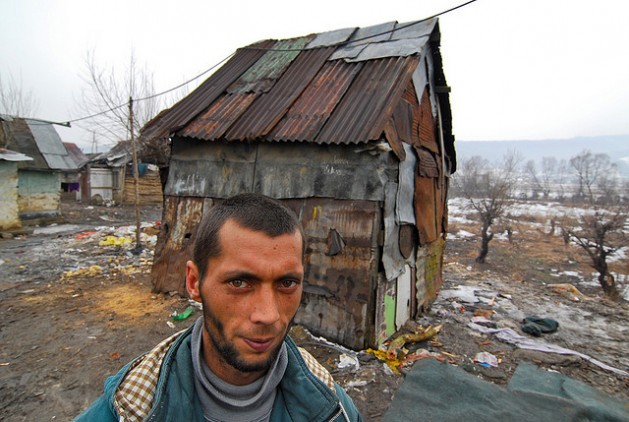 A man lives in the makeshift house behind him in the Slovak Republic, a member of the EU. Photo: Mano Strauch © The World Bank

UNITED NATIONS, Mar 23 2015 (IPS) - When the World Economic Forum (WEF) met last January in Switzerland, attended mostly by the rich and the super-rich, the London-based charity Oxfam unveiled a report with an alarming statistic: if current trends continue, the world’s richest one percent would own more than 50 percent of the world’s wealth by 2016.

And just 80 of the world’s richest will control as much wealth as 3.5 billion people: half the world’s population.

The post-2015 development agenda will only succeed if the SDGs include meaningful and time-bound targets and commitments for the rich that trigger the necessary regulatory and fiscal policy changes.

So, when the World Social Forum (WSF), created in response to WEF, holds its annual meeting in Tunis later this week, the primary focus will be on the growing inequalities in present day society.

The Civil Society Reflection Group (CSRG) on Global Development Perspectives will be releasing a new study which calls for both goals and commitments – this time particularly by the rich – if the U.N.’s 17 proposed new Sustainable Development Goals (SDGs) in the post-2015 development agenda are to succeed.

Asked if the eight Millennium Development Goals (MDGs), which will reach their targeted deadlines in December, had spelled out goals for the rich, Jens Martens, director of the Global Policy Forum in Bonn, told IPS MDG 8 on global partnership for development was indeed a goal for the rich.

“But this goal remained vague and did not include any binding commitments for rich countries,” he pointed out.

This is the reason why the proposed SDG 17 aims to strengthen the means of implementation and revitalise the global partnership for sustainable development, he added.

In addition, Martens said, governments agreed to include targets on the means of implementation under each of the remaining 16 SDGs. However, many of these targets, again, are not “smart”, i.e. neither specific nor measurable, achievable, realistic, and time-bound.

“What we need are ‘smart’ targets to hold rich countries accountable,” he added.

Martens said goals without the means to achieve them are meaningless. And the post-2015 development agenda will only succeed if the SDGs include meaningful and time-bound targets and commitments for the rich that trigger the necessary regulatory and fiscal policy changes, he added.

Goals for the rich are indispensable for the post-2015 agenda, stressed Barbara Adams, senior policy advisor for Global Policy Forum and a member of the coordinating committee of Social Watch.

The eight MDGs, which will be replaced by the proposed new 17 SDGs, to be finalised before world leaders meet at a summit in September, were largely for developing nations with specific targets, including the reduction of extreme poverty and hunger, improving maternal health, combating HIV/AIDS, reducing infant mortality and fighting environmental degradation.

Beginning Monday, a new round of inter-governmental negotiations will continue through Mar. 23 to finalise the SDGs.

The goal to reduce inequality within and among countries; the goal to ensure sustainable consumption and production patterns; and the goal to strengthen the means of implementation and revitalise the global partnership for development

He said the principle of “common but differentiated responsibilities” (CBDR) must be applied rigorously.

Coupled with the human rights principle of equal rights for all and the need to respect the planetary boundaries, this must necessarily translate into different obligations for different categories of countries, Bissio added.

Henning Melber, director emeritus of the Dag Hammarskjöld Foundation, said for Dag Hammarskjöld, the former U.N. Secretary-General, the United Nations was an organisation guided by solidarity. If solidarity is with the poor, the rich have to realise that less is more in terms of stability, sustainability, equality and the future of humanity, he said.

In its new study, the Civil Society Reflection Group said all of the 17 goals proposed by the Open Working Group are relevant for rich, poor and emerging economies, in North and South alike.

On the face of it, for rich countries, many of the goals and targets seem to be quite easy to fulfill or have already been achieved, especially those related to social accomplishments (e.g. targets related to absolute poverty, primary education or primary health care), the Group noted.

“Unfortunately, social achievements in reality are often fragile particularly for the socially excluded and can easily be rolled back as a result of conflict (as in the case of Ukraine), of capitalism in crisis (in many countries after 2008) or as a result of wrong-headed, economically foolish and socially destructive policies, as in the case of austerity policies in many regions, from Latin America to Asia to Southern Europe. “

In the name of debt reduction and improved competitiveness, these policies brought about large-scale unemployment and widespread impoverishment, often coupled with the loss of basic income support or access to basic primary health care. More often than not, this perversely increased sovereign debt instead of decreasing it (“Paradox of thrift”), the study said.

But also under ‘normal’ circumstances some of the “MDG-plus” targets relating to poverty eradication and other social development issues may prove to be a real challenge in many parts of the rich world, where poverty has been rising.

In the United States, the study said, poverty increased steadily in the last two decades and currently affects some 50 million people, measured by the official threshold of 23,850 dollars a year for a family of four.

In Germany, 20.3 percent of the population – a total of 16.2 million people – were affected by poverty or social exclusion in 2013.

In the European Union as a whole, the proportion of poor or socially excluded people was 24.5 percent, the Group said.

To address this and similar situations, target 1.2 in the Open Working Group’s proposal requests countries to “by 2030, reduce at least by half the proportion of men, women and children of all ages living in poverty in all its dimensions according to national definitions”.

How one looks at ‘goals for the rich’ depends on whether one takes a narrow national or inward-looking view, or whether one takes into account the international responsibilities and extraterritorial obligations of countries for past, present and future actions and omissions affecting others beyond a country’s borders; whether one accepts and honors the CBDR principle for the future of humankind and planet earth, the study said.

In addition, this depends on whether one accepts home country responsibilities for actions and omissions of non-state actors, such as transnational corporations and their international supply chains. Contemporary international soft law (e.g. UN Guiding Principles on Business and Human Rights) is based on this assumption, as are other accords such as the OECD (Organisation for Economic Cooperation and Development) Guidelines for Multinational Enterprises.

Last, but not least, rich countries tend to be more powerful in terms of their influence on international and global policymaking and standard setting, the study declared.