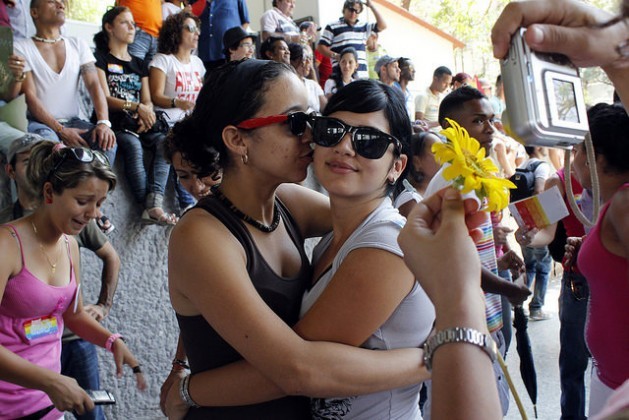 HAVANA, Apr 1 2015 (IPS) - In addition to other forms of discrimination, lesbian and bisexual women in Cuba face unequal treatment from public health services. Their specific sexual and reproductive health needs are ignored, and they are invisible in prevention and treatment campaigns for women.

Many lesbian and bisexual women are afraid of gynaecological instruments and procedures which they experience as particularly distasteful given their sexual orientation. Many are unaware of their risks of contracting sexually transmitted infections (STI) and postpone attending gynaecology appointments in order to avoid questions about their love life, activists and health experts told IPS.

Dayanis Tamayo, a 36-year-old education specialist who lives in Santiago de Cuba, 862 kilometres from Havana, feels that health professionals are judgmental when they discover that her partner is a woman. They make lesbophobic comments and give her disapproving looks.

“Sometimes I get by unnoticed because I don’t fit the stereotype of a butch lesbian, but otherwise I always feel judged,” said Tamayo, who is engaged in research at Universidad de Oriente.

Recent studies back up Tamayo’s statement, pointing to prejudice against lesbian and bisexual women among the country’s health personnel, and ignorance about their particular sexual health needs.

Cuban psychiatrist Ada Alfonso presented a report on “Salud, malestares y derechos sexuales de las lesbianas” (Lesbians’ sexual health, illnesses and rights) at the 2014 Cuban Day Against Homophobia. She said that when they go to see the doctor, these women are asked more about their sexual experiences than about their reason for seeking treatment.

“If we look at women’s health through the lenses of inequality, the gap between lesbians and heterosexuals in regard to health services has a lesbophobic subtext hidden behind the discourse on ‘social needs’,” said Alfonso, an expert with the National Centre for Sex Education (CENESEX).

In her view, social pressure on women who are not heterosexual, amounting to homophobia, causes various forms of psychological and sexual malaise.

Alfonso interviewed women in several of the island’s provinces. She found that ethical deficiencies in the system are leading women to postpone clinical tests until they can see a doctor who has been recommended, or a health professional sharing their own sexual orientation.

The women are particularly averse to gynaecological tests because of the instruments used and invasive procedures such as pelvic and vaginal examinations.

Gynaecology outpatient consultations total 925,549 a year, for a population of 4.7 million women aged over 15, according to the National Office of Statistics.

Personnel working in preventive screening services for cervical and uterine cancer told Alfonso that lesbian women tend to come forward for testing too late for any therapeutic action to be taken.

“We generally think that since we do not have sex with men, we are exempt from those risks, because the information campaigns in the media only portray heterosexual couples,” an accountant resident in the Diez de Octubre neighbourhood of Havana told IPS, requesting anonymity.

The 39-year-old accountant, who works in the state sector, has never had a Papanicolau (Pap) test, which involves collecting cells from the uterine cervix and checking them for abnormalities. The Pap test is recommended for women aged over 25 to prevent cervical and uterine cancer and in Cuba it is offered free to women every three years.

“Although I do know that it is important, I find it psychologically difficult to face this test because I feel so exposed, assaulted even, and I personally do not like penetration,” she said.

All Cubans enjoy health coverage by a local family clinic, which is responsible for reminding women when it is time for their next Pap test. However, many women put it off.

All treatment in the Cuban health system is free of charge and is delivered without institutionalised discrimination. But prejudice against non heterosexual people continues to grow.

“Health personnel are part of society, and society rejects lesbians,” José Martínez, a medical doctor in the eastern province of Granma, told IPS.

According to Martínez, medical training in Cuba is too narrowly focused on a biological approach and makes hardly any reference to psychosocial determinants of health.

“When a lesbian woman goes to see a gynaecologist, the doctor will probably assume that she is at lower risk (of cervical or uterine cancer) because penetration is not involved in her relationship, because this is what they have been taught,” Martínez said.

Yenis Milanés, who has a degree in hygiene and epidemiology, told IPS that “medical students are not required to take a single course on sexuality” during their training.

Women who have intimate relations with women tend to have a low perception of their own risk, and seldom take protective measures during sex, Milanés and Martínez said.

They both collaborated in a 2013 study of 30 lesbian and bisexual women in the province of Granma, which found these women thought they were unlikely to acquire sexually transmitted infections.

Another study in 2014 by Martínez and Milanés confirmed that sexual and reproductive health programmes in Cuba generally do not include information about the risks of contracting STI and HIV/AIDS that specifically addresses lesbian women’s issues.

Lesbians receive less information about STI prevention than other population groups and they have fewer welcoming institutional spaces where they can socialise and discuss their problems, said the report, to which IPS had access.

The research study debunks the myth that engaging in lesbian sex avoids all infection risks, although these are indeed much lower than for other sexual behaviours.

Depending on the sexual practices of a same-sex lesbian couple, unprotected contact with exchange of vaginal secretions and menstrual blood can lead to infection with the HIV/AIDS and Herpes simplex viruses, bacterial vaginosis, gonorrhoea, syphilis, vaginal parasites and other diseases.

Women represented 18.5 percent of the 2,156 new HIV-positive cases diagnosed in Cuba in 2013, bringing the total number of people living with the virus to 16,400, according to the Ministry of Public Health.

Training health professionals to be sensitive to sexual diversity has been a long-established demand by groups of lesbian women supported by CENESEX in the provinces of Camagüey, Ciego de Ávila, Cienfuegos, Granma, La Habana, Santiago de Cuba, Trinidad and Villa Clara.

Through community activism, these groups are struggling for their rights to responsible enjoyment of sexual health, including equality of treatment in the health services and access to assisted reproduction technology.