Anne-Marie Steyn is Series Producer of Shamba Shape-Up and a spokesperson for Farming First. The Farming First coalition is currently in New York advocating for agriculture’s central role in meeting the Sustainable Development Goals. 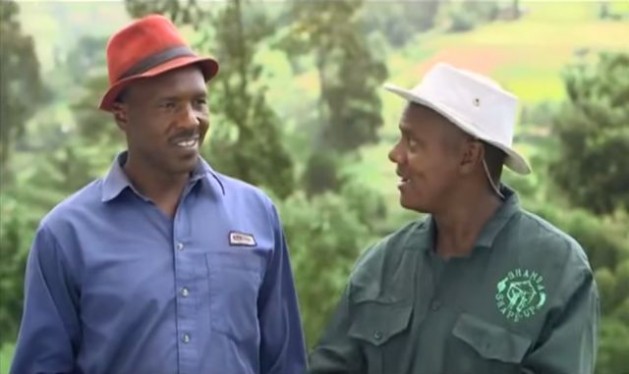 Experts give advice on potato-planting for greater yields in an episode of Shamba Shape Up.

NAIROBI, Apr 24 2015 (IPS) - Peter looked confused as he recounted how he’d painstakingly planted potatoes to sell and to feed his family of eight, only to find that when harvest time rolled around he had been greeted with tiny tubers not much bigger than golf balls.

A young farmer living in Bomet County in Kenya, Peter had recently been ‘shaped up’ on film, as part of our farming reality TV show Shamba Shape Up. The show is aired as a six-month-long (one growing season) series of 30-minute television programmes on leading channels in Kenya, Tanzania and Uganda 2012 to audiences across Kenya.

Peter’s story is discouraging, yet it’s happening to farmers all over Africa, not just with potatoes but all manner of crops that just don’t grow like they should.

One reason for this is that the very soil in sub-Saharan Africa that should be a fertile home for helping crops thrive, is degraded, acidic, and simply won’t support crop growth. In fact, it has been estimated that as much as 65 per cent of Africa’s arable land is depleted of vital nutrients, which have been taken from the soil through continuous farming, and never replaced.  Sub-Saharan Africa represents 10 per cent of the total global population yet only 0.8 per cent of total fertiliser use.

In a region that is struggling to feed itself, addressing soil health is already a critical issue. But we need to start by showing the farmers themselves why it is so important, and why investing in soil health will pay off. Most farmers simply do not understand the importance of looking after the soil to their farm, and apply the same fertiliser, without knowing if it is the right one, season after season for their whole farming lives.

Of the 180 farms Shamba Shape Up has worked with, only one had ever conducted a soil test, to find out what kind of nutrients they needed to boost productivity. Yet when we survey farmers, or review requests coming in through our SMS information service, the topics of fertiliser, soil fertility and soil testing are among the most requested.

It is clear that there is a great knowledge gap. Bridging this gap, and educating farmers on soil health is going to be critical, if we are to meet the proposed Sustainable Development Goal (SDG) to end hunger by 2030. And monitoring farmer outreach that takes place on effective soil management practices could be an effective way to track this progress.

Peter got some advice for his potatoes. An expert recommended the Viazi Power Programme, which uses a combination of nutrients that are applied to the potato crop at various stages of growth. This treatment has helped farmers on one acre of land to reach yields of 50 to 80 sacks of potatoes, that are large and of a good quality.

But Peter had actually tried to use the Viazi Power Programme in the past, and failed. His downfall was using recycled seeds from his farm that were not certified, and carried Bacterial Wilt. Sending three children to school, Peter couldn’t afford the higher price of the clean seed.

Lack of access to finance is a key obstacle to farmers taking on soil health techniques. But here is where education once again plays a vital role: if farmers are shown the return they can have on their investment and how to realise this gain, more will be encouraged to adopt more costly practices.

Shamba Shape Up now includes a soil health element in every episode we produce, and our method of farmer education is proving successful. Of the 50 per cent of the audience who adopt new practices every year from the show, 97 per cent say that the change caused an increase in money or food production from their farm.

A recent study by Reading University estimated that farmers who adopted a soil-related improvement in their maize as a result of Shamba Shape Up shows in Nakuru doubled their production. In Muranga, yields were quadrupled. For families living on 30 to 150 dollars per month, doubled production can mean school fees or surviving an illness.

As negotiators finalise the Sustainable Development Goals at the United Nations later this year, we urge them to consider farmers like Peter, and the life changing transformation that better education on soil health could bring to families like his.

The world cannot accept defeat on such an important issue; instead we must empower farmers like Peter to win these battles, for his family, his country and his continent.

Explore Farming First’s new online essay “The Story of Agriculture and the Sustainable Development Goals” for more on this topic.