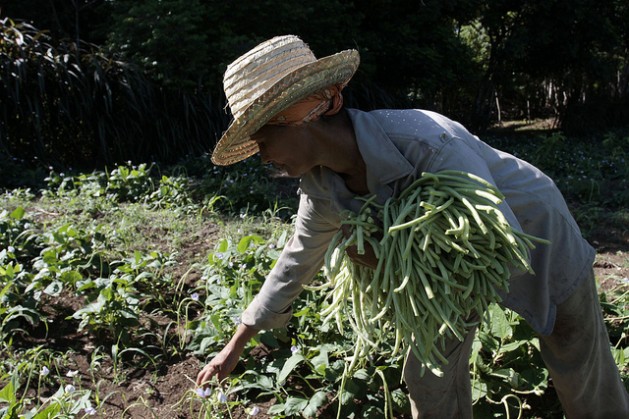 HAVANA, Aug 20 2013 (IPS) - The furrows are hard to make out in fields of the Finca de Semillas, a farm on Havana’s outskirts, because its administrators, Esmilda Sánchez and Raúl Aguilar, protect every centimetre of soil with mulch.

“This technique has done the most to boost our yields,” said Sánchez, one of 1,200 farmers who have benefited from a pilot project for the improvement and conservation of soil, water, and forestland in order to adapt to climate change. “The earth holds the humidity, something that is very much needed in our area, which is affected by drought,” she added.

The project, which has been coordinated since 2010 by the state Soil Institute, includes the planting of forest areas on farms, appropriate mechanisation strategies, a search for new sources of water, no-till farming, live barriers, mulch, and bioproducts.

“Because we didn’t know better, we used to plant without taking into account the direction of the slope, and without creating barriers,” said Aguilar, an ex-welder who has been working for the last eight years on this 30-hectare parcel of land, which belongs to the 26 de Julio Basic Unit of Cooperative Production, a state cooperative. “So the rain washed away all of the nutrients from the soil.”

The farm is part of the Polígono Nacional, which covers 2,015 hectares, including the 26 de Julio coop and the Monumental state farm, in the Havana municipality of Guanabacoa. It involves some 400 farmers.

This was the first of the 35 pilot farms scattered throughout the country as part of the project, which is supported by the United Nations Development Programme.

“Through each one of these, the principles of sustainable land management are spread in practice,” Dagoberto Rodríguez, the director general of the Soil Institute, told IPS.

“Now we are including alternatives for addressing every type of soil, water and forest problem in the country. We also cover different the forms of production,” he added, referring to cooperatives, state farms, and farms run by individuals to whom unproductive state land has been distributed.

Every agricultural unit receives training, technical assistance, and supplies, oriented towards solving the specific problems it faces. At the same time, these units are becoming a reference point for the rest of the rural community where they are located.

The Cuban archipelago was not blessed with fertile land. According to Soil Institute data, only 28 percent of Cuba’s soil is highly productive for agriculture. Of the rest, 50 percent is in the fourth category of productivity, one of the lowest, Rodríguez said.

Also, centuries of agriculture have affected Cuba’s soil, where the economy depended on sugarcane monoculture until the early 21st century. In fact, the agroecological and conservationist movement is only a little over 20 years old here.

Heavy rains and lengthy droughts are eroding Cuba’s land, Rodríguez said. Both are more and more frequent and will intensify with the advance of climate change. For example, a hurricane can drop half of a given area’s annual rainfall in 24 hours, he said.

The technologies established by the Soil Institute to prevent rill erosion – pits or paths caused by water flow – are not effective against the precipitation that is being received by areas such as the basin of the River Cauto, which flows through the eastern provinces of Granma and Santiago de Cuba.

The entire coast and southern plains of Cuba are threatened by coastal flooding and the consequent salinisation of soil.

Based on Soil Institute figures, by 2050 the average salinity of that area, now estimated at five (according to the way soil salinity is measured), will have risen to seven if the effects of global warming are not mitigated, said Rodríguez.

In that case, large expanses of farmland would be lost, and many tracts would have to be planted with crops that are tolerant of the new conditions, he said. Hence the importance of promoting comprehensive management of all natural resources involved in agriculture, he stressed.

“The main problem was a lack of knowledge among farmers about techniques for improving and conserving soil, water, and forests,” said Raimundo Suárez, an engineer who works with the Polígono Nacional. He told IPS that promoting new practices was easier among non-traditional farmers.

“Mentalities have changed with the results obtained,” Suárez said. “The most direct benefit obtained has been a reduction in costs by weight and increased yields and income,” he said.

For 17 years, Leonardo Cardoso has been heading Las Estrellas, a parcel of land that belongs to the state farm Monumental, part of the Polígono. His fruit production, such as mango, guava, loquat and avocado, and his lumber trees depend on rain, his only source of water, he told IPS.

Two priorities on the farm, located on a high slope, are preventing soil from washing away and making maximum use of rainwater. For this purpose, the two farmers he oversees take measures such as creating barriers to erosion made of plants or rocks, or using organic material and earthworm humus.