Robbie Blake is biofuels campaigner for Friends of the Earth Europe 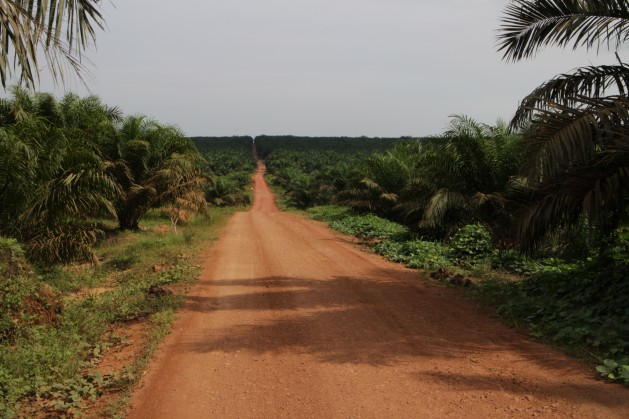 Palm plantation in Sumatra, Indonesia. Palm plantations are being used for the production of biofuel under the guise of a new source of ‘green’ fuel, often displacing local communities and eradicating forests. Photo credit: Clare McVeigh/Down To Earth

BRUSSELS, May 9 2015 (IPS) - Last week, the European Union reached a momentous decision to finally agree a reform to its disastrous biofuels legislation, signalling Europe’s U-turn on the burning of crops for biofuels.

In so doing, the European body has recognised what NGOs and scientists have long been warning – that using food and agricultural crops for transport fuel causes major side effects, including food price hikes and volatility, hunger, forest destruction, expanded land consumption, and climate change.

Six years of political wrangling has ultimately boiled down to a few percentage points. The European Union decided to limit biofuels from food crops like maize, rapeseed, soy and palm oil to 7 percent of transport energy in 2020 (compared with an expected 8.6 percent business as usual).

If that doesn’t sound much (and it should have gone further, given that it still means increasing consumption beyond today’s levels), it is worth knowing that this prevents emissions of an estimated 320 million tonnes of CO2 – equal to the total carbon emissions of a country like Poland in 2012.

The European Union has moreover committed to end policies and subsidies supporting crop-based biofuels after 2020.

Friends of the Earth (FoE) first heard that policies to incentivise biofuels might be causing serious problems a decade ago. Back then, biofuels were hyped as a silver bullet – backed by big agricultural industry interests and as an easy ‘drop-in’ alternative to fossil fuels.

But FoE partners in Indonesia, Paraguay, Brazil and elsewhere began reporting a pattern of massive new plantation developments for sugar cane, oil palm and soy, under the guise of a new source of ‘green’ fuel. These began to displace local communities and eradicate forests – and continue to do so today.

Meanwhile, studies began to show that many biofuels were helping to drive – not prevent – climate change. Extensive scientific research now shows that, on balance, diverting crops to fuel our transport often does more to contribute to climate change than to combat it, due to the deforestation that goes hand-in-hand with large-scale expansion of agricultural land for biofuels.

The results were also disastrous for food. In 2011, a global report on food price volatility by organisations including the OECD, the World Bank, FAO, and the IMF recommended that “governments remove provisions of current national policies that subsidize (or mandate) biofuels production or consumption.”

By turning its back on these biofuels, Europe sends a strong signal to global markets that the biofuels bubble has burst.

The significance of this should not be underestimated. Many countries, rightly or wrongly, see the European Union as a global leader on policies to tackle climate change, and are likely to follow this example in their own biofuels policies. The European Union is also the world’s biggest producer and importer of biodiesel, so this decision will be noticed on world biofuels and commodity markets.

E.U. governments will now have to implement this reform, and they must set the course for phasing out the misguided blending of food crops into Europeans’ fuel tanks altogether. They should next take stock and ensure that other forms of bioenergy (for example, burning wood for electricity) do not cause unintended harm for citizens, the environment and the climate.

And to truly and effectively reduce carbon emissions from transport, they must urgently adopt readily available options like reducing fuel demand in cars, making trains and public transport better and cheaper, speeding up the electrification of our transport systems, and incentives to get people cycling and walking.