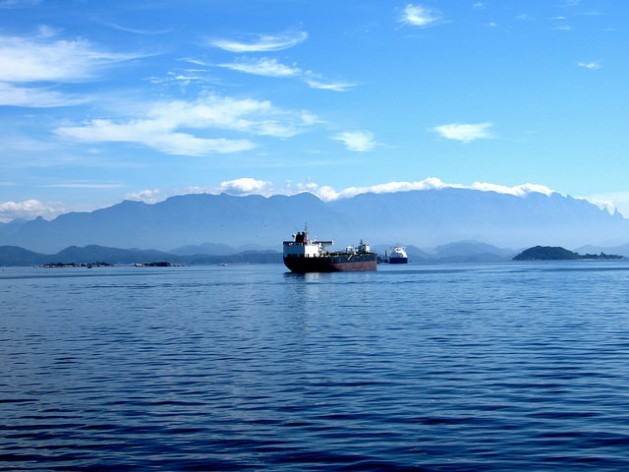 RIO DE JANEIRO, May 2 2015 (IPS) - The Atlantic ocean is Brazil’s last frontier to the east. But the full extent of its biodiversity is still unknown, and scientific research and conservation measures are lagging compared to the pace of exploitation of resources such as oil.

The Blue Amazon, as Brazil’s authorities have begun to call this marine area rich in both biodiversity and energy resources, is similar in extension to the country’s rainforest – nearly half the size of the national territory.

And 95 percent of the exports of Latin America’s giant leave from that coast, according to official figures.

Brazil’s continental shelf holds 90 and 77 percent of the country’s proven oil and gas reserves, respectively. But the big challenge is to protect the wealth of the Blue Amazon along 8,500 km of shoreline.

“We haven’t fully grasped just how immense that territory is,” Eurico de Lima Figueiredo, the director of the Strategic Studies Institute at the Fluminense Federal University, told Tierramérica. “To give you an idea, the Blue Amazon is comparable in size to India.”

“But we aren’t prepared to take care of it; it isn’t yet considered a political and economic priority for the country,” the political scientist said.

Figueiredo, who presided over the Brazilian Association of Defence Studies (ABED) from 2008 to 2010, said the Blue Amazon is a term referring to the territories covered by new treaties on international maritime law.

Brazil is one of the 10 countries in the world with the largest continental shelves, in an ocean like the Atlantic which conceals untold natural wealth that offers enormous economic, scientific and technological potential.

According to the United Nations Convention on the Law of the Sea, a country’s Exclusive Economic Zone (EEZ) comprises an area which extends to 200 nautical miles (370 kilometres) off the coast. 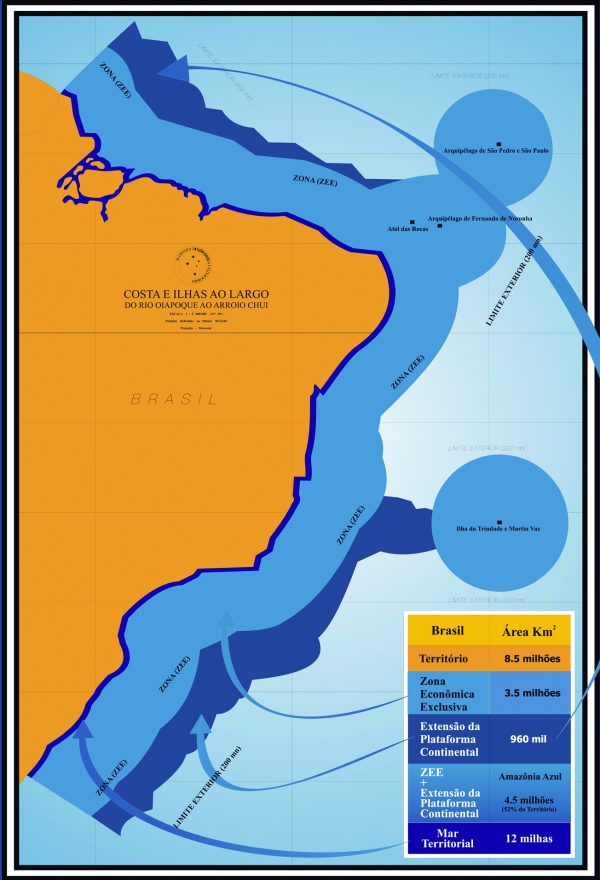 Official map of part of the Blue Amazon, off the east coast of Brazil, where conservation and research are lagging behind economic development, mainly by the oil industry. Credit: Government of Brazil

Brazil’s EEZ was originally 3.5 million sq km. But it later claimed another 963,000 sq km, which according to different national institutions – including scientific bodies – represents the natural extension of the continental shelf.

The U.N. Convention’s Commission on the Limits of the Continental Shelf (CLCS), made up of 148 countries, has so far sided with Brazil, adding 771,000 sq km to its EEZ. The decision on the rest is still pending.

Brazil’s demand, at least with respect to the expansion of the continental shelf granted so far, meets the requisites of the U.N. Convention and grants the country the power to exploit the resources in the expanded area and gives it the responsibility of managing it.

The recognition of Brazil’s claim, although only partial, has annoyed some neighbour countries, because of the huge economic benefits offered by the additional continental shelf it was granted.

Figueiredo said the challenge now is to monitor and protect the continental shelf. “We don’t have full sovereignty with regard to the maritime territory. Brazilian society is unaware of the important need to protect the Blue Amazon. There are enormous shortcomings, with respect to our needs.”

In 2005 a plan was approved to upgrade the navy with an estimated investment of 30 billion dollars until 2025. Defending a country is a complex task, said Figueiredo, because it involves a number of dimensions: military, economic, technical and scientific.

But scientific research in Brazil’s marine territory is currently far outpaced, he said, by the exploitation of resources such as the oil located 250 km off the coast and 7,000 metres below the ocean surface, beneath a thick layer of salt, sand and rocks.

Development of the so-called presalt reserves, discovered a decade ago, would make Brazil one of the 10 countries with the largest oil reserves in the world. And they already provide 27 percent of the more than three million barrels a day of oil and gas equivalent produced by this country.

“That region belongs to Brazil, the country has assumed commitments with the U.N. to monitor and study the living and non-living resources like oil, gas and minerals. If we don’t preserve it, we’ll lose this great treasure,” oceanographer David Zee, at the Rio de Janeiro State University, told Tierramérica.

In his opinion, Brazil is far from living up to the commitments assumed with the international community. “We have duties – we have to meet the U.N.’s scientific research requirements. We have to take greater care of our marine resources,” he said.

Apart from the oil and gas wealth, a large part of the EEZ borders the Mata Atlántica ecosystem, which extends along 17 of Brazil’s 26 states, 14 of which are along the coast.

And the convergence of cold water from the South with warm water from the Northeast contributes to biological diversity and provides shelter for numerous species of flora and fauna.

But only 1.5 percent of Brazil’s maritime territory is under any form of legal protection, Mata Atlantica reports.

Thus, ensuring national sovereignty over jurisdictional waters is still an enormous political and military challenge. In March, some 15,000 naval troops and 250 Navy boats and aircraft took part in Operation Blue Amazon, the biggest of its kind carried out so far in Brazilian waters.

“This was an opportunity to train and guarantee the security of navigation, crack down on drug trafficking, and patrol the sea. The mission involved the entire territorial extension of Brazil,” Lieutenant Commander Thales da Silva Barroso Alves, commander of one of the three offshore patrol vessels that Brazil has to monitor the Blue Amazon, told IPS.

These vessels control the extensive coast in “areas of great economic interest, exploitation and accidents. Illegal fishing is also a recurrent issue,” he said.

The officer argued that the extraction of marine resources should be carried out in a “conscious, sustainable fashion,” with the aim of preserving biodiversity.

Figueiredo, the political scientist, concurs. “Our ability to defend the Blue Amazon depends on our capacity to develop technical-scientific means of protecting biodiversity in such an extensive area,” he said.