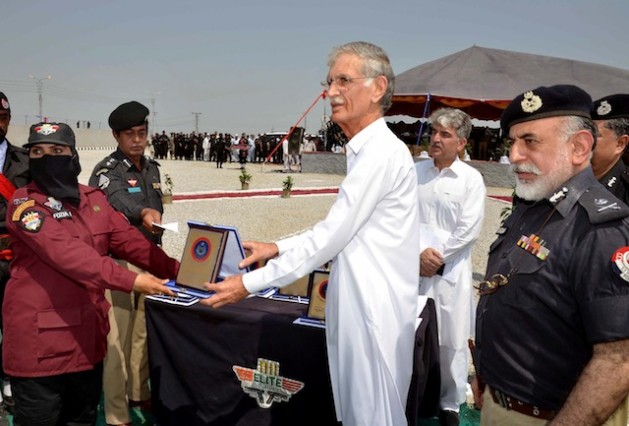 One of the women who recently completed a training programme for female counter-terrorism commandos in northern Pakistan accepts a certificate at her graduation ceremony. Credit: Ashfaq Yusufzai/IPS

Ever since her father, a police constable, was killed in a 2013 Taliban suicide attack in Peshawar, capital of Pakistan’s northern Khyber Pakhtunkhwa province, she has longed to carry on his legacy.

“We can operate all sorts of weapons and can battle militants anywhere the government chooses to deploy us. We are fearless.” -- 22-year-old Zainab Bibi, a recent graduate of an elite female military academy in northern Pakistan
Such a dream was not easily realised here in the heart of tribal Pakistan, where life for many residents has been suspended between militants and the military since 2001, when extremists fleeing the U.S. invasion of neighbouring Afghanistan began crossing the border and establishing a home base in this mountainous province.

Last year, however, Shah was offered the chance to make her wish a reality when the local government launched a five-month training programme for a small squad of women commandos.

The decision to draft women into KP’s beleaguered armed forces came on the heels of last December’s terrorist attack on the Army Public School in Peshawar that left 145 people dead, including 132 students between eight and 18 years of age.

The Tehreek-e-Taliban Pakistan (TTP) claimed responsibility for the killing spree, claiming it as an act of retaliation for Operation Zarb-e-Azb, a military offensive launched against militants in North Waziristan in the summer of 2014.

For over a decade the armed forces have very nearly exhausted their options in their dogged attempts to ride the northern provinces of extremist groups. Everything from air raids to ground operations have been tried and failed, with heavy losses on both sides.

“In the last nine years alone,” KP Police Chief Nasir Khan Durrani told IPS, “we have lost over 5,000 policemen [in battles] with the outlawed TTP.”

Shaken by the school massacre last year, the province has stepped up its game against the militants. “We have raised the number of personnel from 70,000 to 90,000, and also become the first province in the country to have female commandos,” he added.

Bringing women into a profession dominated by men is a bold move, not least because militants in the area have made it very clear that a woman’s place is in the home.

But for the local force, it is the next logical step in the fight against extremism: it sends a clear message that women stand on equal footing with their male counterparts, and enables the police to navigate ‘delicate’ situations in counterterrorism field operations, such as inspecting women in potential terrorist compounds, or easily searching the homes of suspected terrorists where female relatives might balk at the arrival of male officers.

Following an intensive training session at an academy in KP’s remote Nowshera District that ended on Jun. 16, the 35 female commandos now stand ready to head out onto the frontlines.

Five grueling months of rising at five am and training until nearly midnight has turned this elite squad into a force to be reckoned with, experts say. Decked out in conservative dress, even in scorching weather, the women learned to handle anti-tank and anti-aircraft launchers.

But even more than their training, their grit springs from years of living under the shadow of militancy in a country that has witnessed some 50,000 terrorist-related deaths in the last decade alone.

Women have often borne the brunt of the conflict, including enduring the Taliban’s systematic attacks on girls’ education and a deadly campaign against women health workers. Furthermore, of the many thousands of people displaced by both government and militant campaigns, women refugees are among the worst impacted by a lack of food, health and sanitary facilities.

“It is a matter of pride to defend our people against aggression,” 22-year-old Zainab Bibi, a recent graduate of the academy, told IPS. “Our people need us to help them stay safe from violence.”

“We can operate all sorts of weapons and can battle militants anywhere the government chooses to deploy us,” she said in a determined voice. “We are fearless.”

Though small in scope, the pilot scheme has inspired officials both in and outside the province to expand its reach.

According to Peshawar-based political analyst Khadim Hussain, the government should consider preparing a “pool of women commandos for the whole country.”

Indeed, education and employment opportunities for women in the province, home to 22 million people, are extremely limited. Women comprise just 40,000 out of 740,000 employees in the health sector, and female doctors number just 600, compared to 6,000 men.

Pakistan’s latest Economic Survey revealed that women are highly overrepresented in the informal sector, performing the bulk of the country’s unpaid domestic labour and engaging in a range of other menial low-paid jobs such as cooking and cleaning.

Meanwhile, their share of professional clerical and administrative posts stands at less than two percent. Experts say these dismal numbers are the combined result of social stigma, religious conservatism and strict familial obligations that keep women bound to their home and out of the job market.

Even those who actively seek work are often disappointed – between 2010 and 2011, for instance, an estimated 200,000 women in KP were unemployed despite expressing a wish to secure a job.

Against this backdrop, the entry of women into the upper echelons of the armed forces represents a monumental step forward for gender equality, and could even spill over into other spheres of life.

Noor Wazir, who ran the military training programme, told IPS that “graduates will be imparting their training to women in other districts and we hope to have hundreds of female commandos in a few years.”

He added that women would not only be stationed on military front-lines, but could easily be deployed at polling stations during elections, in hospitals for additional security or in market places that have long been targets of terrorist attacks, and where women are often loathe to go without a male escort.

Whichever direction the government chooses to take this successful programme, the women involved tell IPS it has been a life-changing experience.

Prior to their graduation in June they had heard whispered doubts as to their ability to complete the taxing course, or withstand the demands of a military lifestyle.

Now, even the skeptical fathers of these young women have come around to the idea that female commandos can handle the task every bit as well as their male counterparts.

Speaking to IPS in an exclusive phone interview, KP Chief Minister Pervez Khattak said, “Hats off to the courageous KP policewomen. We salute and praise them. It is highly encouraging that women are ready to cope with the challenges posed by terrorism.”