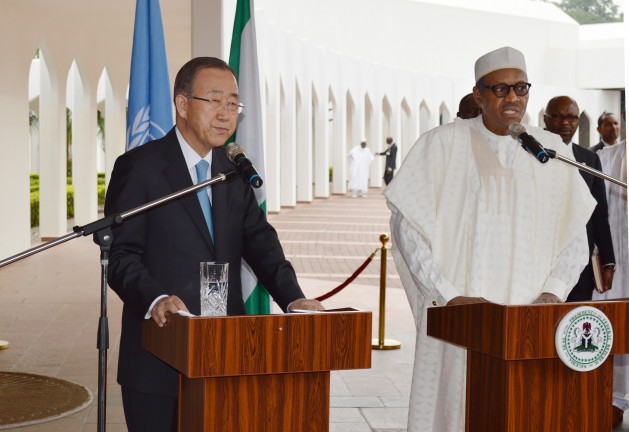 UNITED NATIONS, Aug 26 2015 (IPS) - With over 1.5 million displaced, 800,000 of whom are children, and continuously escalating violence in northeastern Nigeria, United Nations Secretary-General Ban Ki-moon described the humanitarian situation as “particularly worrying” during a visit to the country.

Speaking at a press conference on Aug. 24 following a meeting with newly-elected Nigerian President Muhammadu Buhari, Ban expressed concern over the “troubling” violence perpetrated by armed extremist group Boko Haram and its impact on civilians.

In an impact assessment report released in April 2015 on the conflict in Nigeria, the United Nations Children’s Fund (UNICEF) found that in 2014 alone, more than 7,300 people have been killed at the hands of Boko Haram.

As a result of the conflict, access to health services, safe water, and sanitation is extremely limited in northeastern Nigeria. UNICEF found that less than 40 percent of health facilities are operational in the conflict-stricken region, increasing the risk of malaria, measles, and diarrhoea.

Malnutrition rates have soared in northern Nigeria, accounting for approximately 36 percent of malnourished children under five across the entire Sahel region.

UNICEF also reported that women and children are deliberately targeted and abducted in mass numbers for physical and sexual assault, slavery, and forced marriages.

Ban reiterated these findings during a dialogue on democracy, human rights, development, climate change, and countering violent extremism in Abuja on Aug. 24, marking the 500th day of the Chibok schoolgirls kidnapping.

“I am appealing as U.N. Secretary-General and personally as a father and grandfather. Think about your own daughters. How would you feel if your daughters and sisters were abducted by others?” said Ban while calling for the girls’ unconditional release.

Though the Chibok kidnapping was by far Boko Haram’s largest abduction, Human Rights Watch reported in its 2015 World Report on Nigeria that the extremist group has abducted more than 500 women and girls since 2009.

Amnesty International has also reported brutal “acts which constitute crimes under international law” committed by Nigerian government forces, including the abuse, torture, and extrajudicial killings of detainees. In one case, the national armed forces rounded up a group of 35 men “seemingly at random” and beat them publicly. The men were detained and returned to the community six days later, where military personnel “shot them dead, several at a time, before dumping their bodies.”

Corruption has also been a serious problem within the police force and the government. The International Crisis Group stated that the country has lost more than 400 billion dollars to large-scale corruption since independence in 1960.

“The most effective way to root out this disease is a transparent, fair, and independent process to address corruption in a comprehensive way,” said Ban in his keynote address to the dialogue.

The U.N. chief also stressed on the importance of collaboration in addressing such violent crimes and in alleviating the humanitarian situation, announcing increased humanitarian operations and the provision of training for military operations.

But he dismissed the sole use of military force, stating: “Weapons may kill terrorists. But good governance will kill terrorism.”

The group is opposed to secular authority and seeks to implement Sharia law in northern Nigeria, where widespread poverty and marginalization may also have been contributing factors to the extremists’ rise.

According to Nigeria’s Millennium Development Goals Report, the north has the highest absolute poverty rate in the country, with approximately 66 percent of people living on less than a dollar a day, compared to 55 percent in the south.

In fact, in an April New York Times op-ed, Buhari stated that countering Boko Haram will not only require increased military operations, but also increased attention to social issues such as poverty and education.