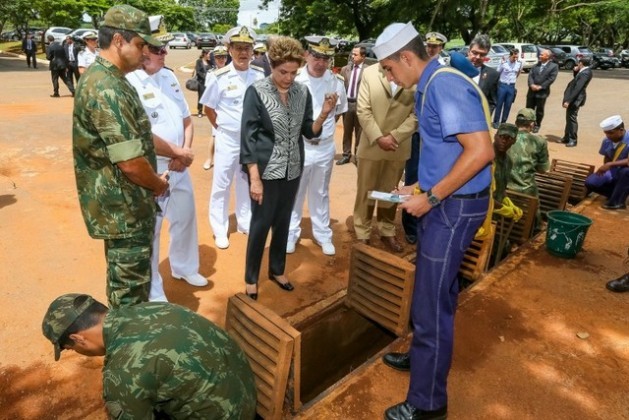 In the country’s capital, Brazilian President Dilma Rousseff oversees one of the military operations against the Aedes Aegypti mosquito carried out at a national level in the last few days to curb the spread of the Zika virus. Credit: Roberto Stuckert Filho/PR

RIO DE JANEIRO, Feb 2 2016 (IPS) - Brazil is deploying 220,000 troops to wage war against the Zika virus, in response to the alarm caused by the birth of thousands of children with abnormally small heads. But eradicating the Aedes aegypti mosquito requires battles on many fronts, including science and the pharmaceutical industry.

The Zika virus, transmitted by the Aedes aegypti mosquito, like dengue and Chikungunya fever, is blamed for the current epidemic of microcephaly, which has frightened people in Brazil and could hurt attendance at the Aug. 5-21 Olympic Games in Rio de Janeiro.

It has also revived the debate on the right to abortion in Brazil, where the practice is illegal except in cases of pregnancy resulting from rape, or when the mother’s life is in danger.

“Immediate measures to provide assistance to the mothers of newborns with microcephaly are indispensable,” said Silvia Camurça, a sociologist who heads SOS Body – Feminist Institute for Democracy. “Almost all of them are poor, and they are completely overwhelmed by this new burden, with no help in the household.

“Imagine a mother with more than one child, without a husband,” she told IPS. “Childcare centres are not prepared to receive children with microcephaly, who are now numerous and whose numbers will grow even more, with the children to be born in the next few months. It’s a desperate situation. Public assistance for these families is urgently needed.”

An increase in the number of unsafe back-alley abortions, which put women’s lives in danger, “is very likely, since many women know that there are no public policies to support them, and the situation is aggravated by the economic crisis and high unemployment,” said Camurça.

Pernambuco, the Northeast Brazilian state where her non-governmental organisation is based, has the highest number of suspected or confirmed cases of microcephaly, a rare birth defect.

A total of 270 cases of microcephaly have been confirmed in Brazil and 3,448 suspected cases still need to be investigated. There have also been 68 infant deaths due to congenital malformations since October, 12 of which were confirmed as Zika-related and five of which were not, while the rest are still under investigation.

The main symptoms of Zika virus disease are a low fever, an itchy skin rash, joint pain, and red, inflamed eyes. The symptoms, which are generally mild, last from three to seven days, and most people don’t even know they have had the disease.

Brazil is at the centre of the debate on the virus because it is experiencing the largest-known outbreak of the disease, and because the link between the Zika virus and microcephaly was identified by the Professor Joaquim Amorim Neto Research Institute (IPESQ) in the city of Campina Grande in the Northeast – the poorest region of Brazil and the hardest-hit by this and other mosquito-borne diseases.

On Monday Feb. 1, the World Health Organisation declared the Zika virus and its suspected link to birth defects an international public health emergency. 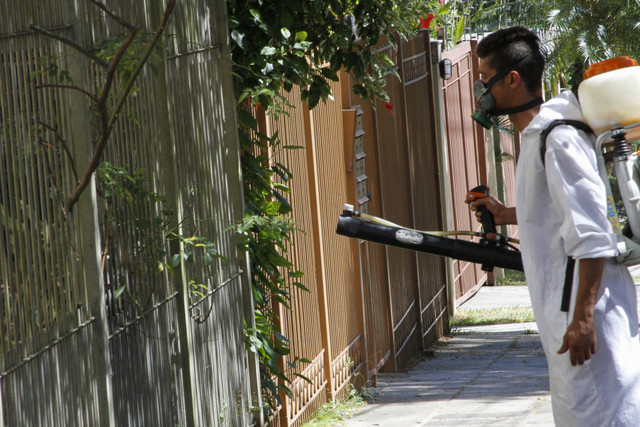 Spraying against the Aedes aegypti mosquito, which transmits the Zika virus and other diseases, has been stepped up in cities around Brazil. Credit: Cristina Rochol/PMPA

Although WHO Director General Margaret Chan said “A causal relationship between Zika virus and birth malformations and neurological syndromes has not yet been established,” in Brazil there are no doubts that the Aedes aegypti is the transmitter of the new national tragedy.

The government has mobilised the army, navy and air force against the epidemic, and is trying to mobilise the local population as well as state employees who make door-to-door visits as part of their job, such as electric and water utility meter readers.

Mosquito repellent has been distributed to pregnant women. “But there are already shortages of repellent, and the ones that are safe for pregnant women are more expensive,” and less affordable for poor women, said Camurça.

The activist said another big problem is the lack of information and knowledge about epidemics. In Pernambuco, dengue fever – also transmitted by the Aedes aegypti mosquito – was under control, according to health officials, “but all of a sudden we’re the champions of Zika,” a contradiction that has yet to be explained, she complained.

The first confirmed case of Zika virus in Brazil came to light in April 2015, after which the disease began to spread like wildfire. It is now present in 23 countries of the Americas, according to the WHO.

Epidemiologists say the statistics available on diseases transmitted by the Aedes aegypti are insufficient because reporting the diseases was not mandatory, which led to under-reporting.

Now microcephaly, but not its causes, are reported, and the lack of reliable statistics from the past, and on related infections, make it more difficult to obtain clear data.

Microcephaly has a number of other causes, such as syphilis, toxoplasmosis, rubella, cytomegalovirus, herpes and different infections.

Science is, however, another battlefront that could be decisive in this medium to long-term war. The hope is that efforts to develop a vaccine will be successful, at least to prevent the Zika virus’s most severe effect: microcephaly in unborn infants.

The Health Ministry’s Secretariat of Science, Technology and Strategic Inputs has played a key role in research on the Zika virus, encouraging studies in Brazil’s leading health research centres.

The head of the Secretariat, epidemiologist Eduardo Costa, believes Brazil could develop a vaccine, “despite the bureaucratic hurdles to the import of biological material and other inputs necessary to research, delaying it and driving up the costs.”

“It’s Brazil’s responsibility to produce a vaccine, and it’s something we owe Africa,” he told IPS.

Progress has been made in specialised centres, such as the Butantan Institute in the southern city of São Paulo, which is working on a vaccine that offers 80 percent protection against the four strains of dengue and could extend to the Zika virus. “Clinical tests are needed,” which are costly and take time, Costa said.

The Evandro Chagas Institute, of the northern Amazon state of Pará, is also making progress towards a medication that mitigates the effects of the Zika virus. And a University of São Paulo laboratory is researching possibilities offered by genetic engineering.

These Brazilian research centres have ties to universities or pharmaceutical companies abroad, and the resulting medications could be wholly produced in Brazil, in Bio-Manguinhos, the technical scientific unit that produces and develops immunobiologicals for the Oswaldo Cruz Foundation (Fiocruz), a leading Health Ministry research centre, said Costa.

Other technologies being tested in Brazil are aimed at curbing the breeding of the Aedes aegypti. One example is the Wolbachia bacterium, which can stop the dengue virus from replicating in its mosquito host. Fiocruz is releasing mosquitos with the bacterium in a Rio de Janeiro neighbourhood to infect other Aedes aegypti mosquitos.

Another initiative involves the release of genetically modified male mosquitos which produce offspring that die before they are old enough to start reproducing. Other studies have involved an insect growth regulator, pyriproxyfen, which disrupts the growth and reproduction of mosquitos.

In addition, new tests are needed to diagnose women with the Zika virus. The tests currently available must be carried out in the few days that the infection is active.

“A post-infection test is needed, to identify the lingering antibodies and offer more information about what the virus does,” Costa said.

Brazil eradicated the Aedes aegypti mosquito in 1954, in a campaign against yellow fever, the disease it spread back then, Costa pointed out. But the mosquito returned in intermittent outbreaks in the following decades, when it began to transmit dengue.

Now eradicating the mosquito is impossible, even for 220,000 soldiers, with the expanded repertoir of viruses it transmits, and today’s much more populous cities, with limited sanitation, endless amounts of garbage and containers of all kinds strewn everywhere. But technology and social mobilisation could at least help curb the mosquito population.