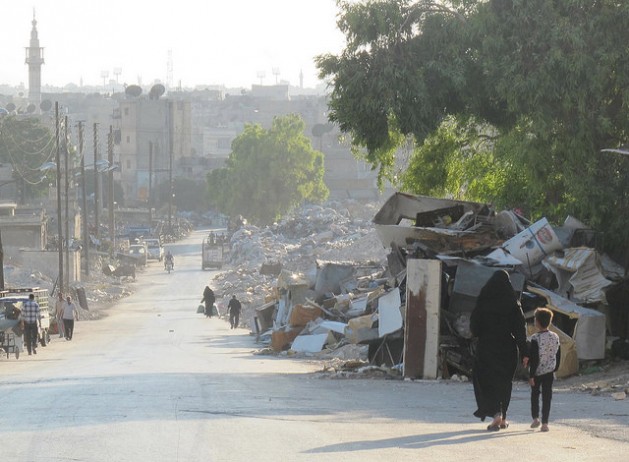 What remains of a street in Aleppo, August 2014. Credit: Shelly Kittleson/IPS.

UNITED NATIONS, Jun 17 2016 (IPS) - Only a small percentage of the world’s most vulnerable refugees will be resettled in 2017, according to new figures released by the UN High Commission for Refugees (UNHCR) this week.

A group of 35 non-government organisations (NGOs) responded to the new figures by saying that a “dramatic increase” in resettlement numbers is “urgently needed”.

The UNCHR expects to be able to only resettle up to 170,000 refugees in 2017, out of 1.19 million refugees considered eligible for resettlement, a small fraction of the world’s 60 million displaced people.

The 170,000 resettlement places currently offered by governments fall well short of the UN Secretary-General Ban Ki-Moon’s call for governments to help resettle or provide other legal channels for at least ten percent of refugees.

Refugees considered eligible for resettlement include survivors of torture, unaccompanied female refugees at risk of sexual abuse in refugee camps, and lesbian, gay, bisexual and transexual (LGBT) refugees who are at risk of persecution even after fleeing their home countries.

“It may be a woman whose husband has been killed in Syria, who is a single female head of household with multiple children for example, and in the Zaatari camp in Jordan who will be vulnerable, just getting to and from the latrines because she doesn’t have a man to escort her,” Bill Frelick, Refugee Rights Program Director at Human Rights Watch told IPS.

“Or it may be someone who is a gay refugee who has fled from the Democratic Republic of Congo into Uganda and (he) would not be safe in Uganda.”

As overall numbers of displaced persons are now higher than at any time since the end of World War II the number of acutely vulnerable refugees needing resettlement has also grown.

“There are enormous challenges even in meeting the projected referrals by UNHCR let alone the actual needs for resettlement." -- Bill Frelick, HRW.

“Much more needs to be done to keep pace with the growing numbers of acutely vulnerable,” UN High Commissioner for Refugees Filippo Grandi said. “Resettlement is now more important than ever as a solution, and we must grasp this opportunity to increase the number of refugees benefitting from it, as well as other avenues for admission.”

Increasing resettlement places to 340,000 will be one of the items on the agenda at two upcoming leaders’ summits on migration and refugees to be held at the UN in September. One of the summits will be convened by the UN and the other by U.S. President Barack Obama.

“There is no doubt about it: resettlement saves lives. It prevents deaths at sea and it makes it harder for smugglers to exploit refugees for profits,” said Jasper Kuipers, deputy director of the Dutch Council for Refugees one of the 35 NGOs which issued the statement this week calling for an increase in resettlement numbers.

However, even the 170,000 places currently offered are not guaranteed, said Frelick.

The United States currently offers the most resettlement places yet these places are already facing significant pressures from domestic politics.

“There are enormous challenges even in meeting the projected referrals by UNHCR let alone the actual needs for resettlement,” said Frelick.

Individual U.S. states are increasingly saying that they will not receive certain refugees, he said, “(these states) have essentially rolled-up the welcome mat saying that that they no longer want Syrian and Iraqi refugees.”

“One of the candidates for President has talked about sending Syrian refugees back, who’ve already been resettled here,” he added, referring to Republican Presidential nominee Donald Trump.

However Frelick also noted that there were other countries which should be doing more to help increase overall resettlement numbers, including Russia.

“There are quite a number of countries that are doing very little in terms of responding to UNHCR resettlement appeals,” he said.

He noted that the countries which have tended to offer the most resettlement places have also been those that have been best placed to do so because of their circumstances, and that they should continue to do so to support other countries which are hosting the vast majority of refugees.

“This depends on international solidarity,” he said.

“The country by geography and historical happenstance, like a Jordan for example, which happens to be situated with borders on Iraq and Syria and Palestine and basically for 65 years has been having one influx of refugees after another,”

“It didn’t have the good fortune to be sitting on oil fields and this sort of thing or water even, and has really been enormously challenged by the presence of refugees on their soil.”

Resettlement is therefore a small yet significant part of the bigger picture of refugees, asylum seekers and internally displaced persons.