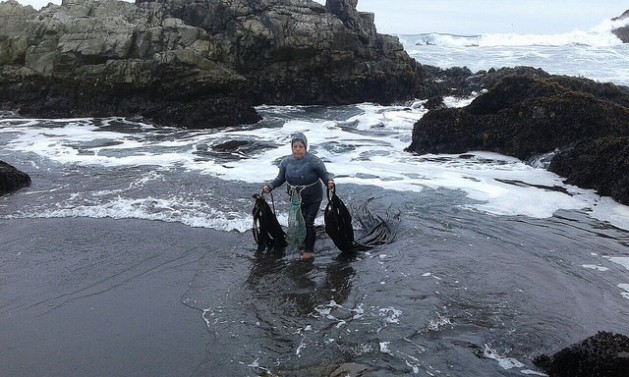 Zulema Muñoz wades out of the Pacific ocean near the small town of Matanzas, carrying two large seaweed plants she uprooted from the rocks where they hold fast and grow. Seaweeds are an increasingly important part of the Chilean fisheries sector and provide a livelihood for thousands of people. Credit: Orlando Milesi/IPS

MATANZAS, Chile, Jul 4 2016 (IPS) - Seaweed, a nutrient-rich foodstuff that was a regular part of the diet of several South American indigenous peoples, is emerging as a new pillar of food security in Latin America and is providing a livelihood for thousands of people in the region’s coastal areas.

“I have been harvesting seaweed since I was five years old, and now I am 50. The person who always buys all my produce says it is used to make creams and plastics,” Zulema Muñoz, a seaweed collector in the small coastal town of Matanzas on the Pacific ocean 160 km south of Santiago, told IPS.

Seaweeds have been used as human food ever since ancient times, especially in China, the Korean peninsula and Japan.

“Seaweeds must definitely be cultivated because we cannot simply collect the wild algae populations. Experience shows that over-exploitation is a widespread problem - not only for seaweed - for which we must find sustainable solutions” - Erasmo Macaya.

When people from these countries migrated to other regions of the world they took their food habits with them.  This is why dishes based on fresh, dried and salted algae can be found in nearly every corner of the earth.

According to the Food and Agriculture Organization of the United Nations (FAO), some 25 million tonnes a year of seaweeds and other algae are gathered worldwide for use as food, cosmetic and fertiliser ingredients; they are also processed to make thickeners and additives for animal feeds.

FAO says that marine aquaculture products, particularly algae and molluscs, contribute to food security and the alleviation of poverty, since most producers work in small- or medium-sized fishing businesses.

In Latin America, hunger affects 34 million people out of the total regional population of 625 million, according to FAO’s statistics. Countries like Argentina, Brazil, Colombia, Cuba, Ecuador, Mexico, Peru and Venezuela have explored seaweed production for food.

In Chile, “studies carried out in Monte Verde (in the Los Lagos region, 800 km south of Santiago) showed that in one of the earliest human settlements in the Americas, people ate seaweed as part of their diet,” said Erasmo Macaya, principal researcher at the Algal Research Laboratory at Chile’s prestigious University of Concepción.

Marine algae “were a food source for the Lafkenche indigenous people, who used them (and still do) as part of their diet, particularly kelp (Durvillaea antarctica), known as ‘kollof,’ and ‘luche’ (Pryopia and Porphyra species),” he told IPS, speaking from the southern city of Concepción.

Axel Manríquez, head chef at the Plaza San Francisco hotel in Santiago, told IPS that there is currently a “re-enchantment with algae, primarily because vegans eat so much of them.”

“Because of intermarriage with Chinese people and the influence of Chinese culture, Peruvians have incorporated seaweed into their “Chifa” cuisine (based on Cantonese culinary traditions). In Chile, Chinese influence is limited to the north of the country, and so all our seaweed is exported to Asia, where it is in great demand as a foodstuff,” he said. 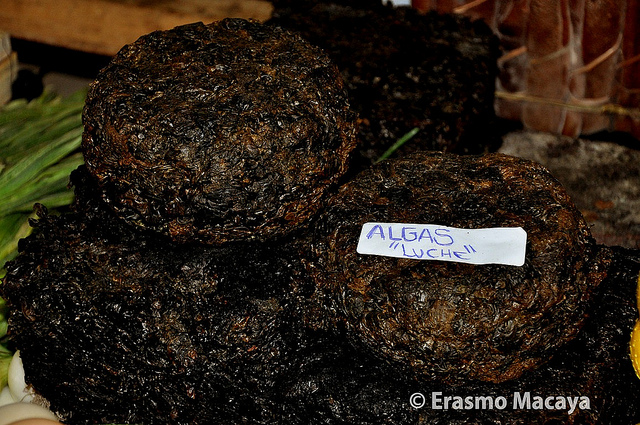 “Luche” (Pyropia and Porphyra species of algae) on sale in a market in Chile, where it is finding a niche among traditional produce. Seaweed was part of the diet of several indigenous peoples in the country and its consumption is beginning to take off due to its high nutritive value. Credit: Courtesy of Erasmo Macaya

Algae “are extremely potent: they are rich in nutrients and are also a very healthy product because their salinity is regulated by the ocean. They do not contain excess salt, and they can be eaten either raw or cooked. They help our metabolism and facilitate iodine incorporation. Asian people do not get thyroid diseases because they eat large amounts of seaweed,” the chef said.

Over 700 species of marine macroalgae have been described in Chile, yet only 20 of these species are utilised commercially.

“Unfortunately there have been very few studies on biodiversity and taxonomy, which are also very poorly funded since they do not generate immediately visible products, and many observers consider they do not have a ‘direct’ application,” said Macaya, who believes the real number of species is probably “two- or three-fold higher” than those already classified.

Macaya said that in Chile, only kelp and “luche” (Pyropia and Porphyria species) are used as human food at present, but that red algae like “carola” (Callophyllis) and sea chicory (Chondracanthus chamissoi) are being exported to other countries for human consumption.

Ongoing research is being done on ways of adding value to algae by converting them into biofuels, bioplastics and biomedical products, among others, a move that is recently gaining ground at global level.

However, over the past few decades demand has grown faster than the capacity to supply needs from natural (wild) seaweed stocks.

“Seaweeds must definitely be cultivated because we cannot simply collect the wild algae populations. Experience shows that over-exploitation is a widespread problem – not only for seaweed – for which we must find sustainable solutions,” said Macaya.

Fifty-one percent of the 430,000 tonnes of algae extracted in Chile in 2014 was “huiro negro” (Lessonia spicata) or “chascón” (Lessonia berteroana). Together with two other brown seaweed species, “huiro palo” (Lessonia trabeculata) and “huiro” (Macrocystis pyrifera), they make up a combined 71 percent of the extracted biomass.

“This is very worrying, considering that all these species fulfil tremendously important ecological roles: they create undersea forests that host a wide, rich biodiversity,” Macaya said.

To address this problem, the Chilean government enacted a law to promote cultivation and repopulation of natural seaweed beds (“Ley de bonificación para el repoblamiento y cultivo de algas”). This will provide compensation to small seaweed collectors (artisanal fishers and micro-businesses) in order to increase algal cultivation and harvesting and, in the process, to redeploy large numbers of workers.

Although many people do not realise it, algae are in daily use: everyday products like toothpaste, shampoos, creams, gels and natural remedies contain compounds known as phycocolloids that are derived from seaweed, such as carrageenan, agar and alginates.

And they are also used in food dishes. For instance, “nori” is a Japanese seaweed used in the preparation of sushi.

Muñoz, the seaweed collector in Matanzas, only eats “luche, but not the other seaweeds. They say they are delicious when properly prepared, especially “luga”, but I have never cooked it,” she said.

Day after day, she wades in and out of the sea, armed only with a knife in a bag attached to her belt, fetching armfuls of “luga”, “chasca”, kelp and “luche.”

“Four women used to work here, then one died and three of us were left. Now there’s another seaweed collector, a girl who has joined the fisheries union, but she only works for a few hours,” said Muñoz while she waited for the feeble winter sun to dry the seaweed spread out on the sand. It will soon be ready for sale.