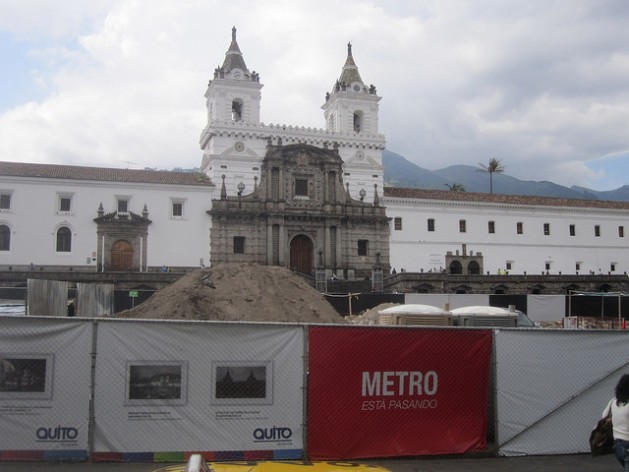 In the Plaza de San Francisco, where the church and convent of the same name stand, fences have blocked off the construction site for the Quito subway for months, as work has been stalled while archaeological finds are assessed. Quito’s historic centre is the biggest in Latin America. Credit: Mario Osava/IPS

QUITO, Nov 30 2016 (IPS) - Success can kill, when it comes to cities. Spain’s Barcelona is facing problems due to the number of tourists that it attracts. And the historic centre of Ecuador’s capital city, Quito, a specially preserved architectural jewel, is losing its local residents as it gentrifies.

“The subway is a good solution, which will reduce the use of private buses that pollute, and will help solve congestion in a city where the traffic passes through the north-south corridor.” -- Julio Echeverría

The effort to revitalise the historic centre was based on a “monumentalist policy,” on the restoration of churches and large buildings, which led to a process of gentrification, driving up housing prices and the conversion of residential into commercial property and pushing out low-income residents, he told IPS.

“I fear that the subway will drive away more people,” exacerbating the tendency, he added.

Two stations of the first subway line in Quito started to be built in 2013 by the Spanish company Acciona. “Phase two”, the construction of a 22-kilometre tunnel and 13 other stations, got underway in January 2016 and is to be completed by July 2019.

The consortium that won the bid is made up of Acciona and Odebrecht, Brazil’s largest construction company, which has built subway lines in several Latin American countries.

Only one station, in the Plaza de San Francisco, will be located in the historic centre. “Projections estimate that 42,000 passengers per day will pass through that station,” that is to say that “with the subway the same number of people will arrive but by a different means of transport,” Mauricio Anderson, the general manager of the Quito Subway Public Metropolitan Company (EPMMQ), told IPS.

Underground transport “will reduce traffic congestion, vibrations and pollution” by replacing cars and buses, he said.

The aim of the new mass transport system is to improve the quality of life of people in Quito, by reducing travel time, generating socioeconomic inclusion of people in the lower-income outlying neighbourhoods, saving fuel, cutting the number of accidents and creating a cleaner environment, according to EPMMQ.

“Each day about 400,000 people in Quito will use this system,” said Anderson. “This will help optimise other services and increase the average travel speed in Quito, which for surface transport is now 13 kilometres per hour, and by subway will be 37 kilometres per hour.” 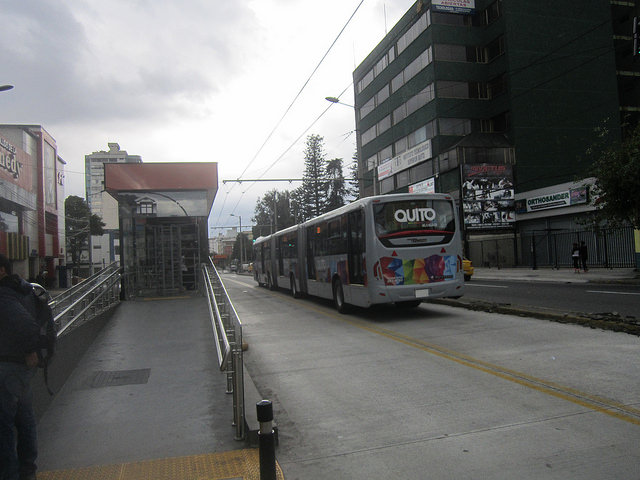 A dedicated lane system trolley bus and one of its stations, in Ecuador’s capital. Critics of the subway in Quito argue that it would be better for the city to extend and improve the tramways. Credit: Mario Osava/IPS

As Ecuador’s capital has an elongated shape, stretching from north to south, the 22-kilometre subway line with 15 stations will enable most of the city’s residents to take the subway or catch a bus that hooks into the system within less than four blocks of their homes or workplaces, according to studies that guided the system’s design.

The subway, with trains that will hold up 1,500 passengers each, “will connect the entire integrated transport system.”

According to 2014 statistics, there were 2.8 million daily trips in the public transport system of the Metropolitan District of Quito, most of them by conventional buses and the Bus Rapid Transit (BRT) system, which uses bus-only lanes.

Opponents of the subway argue that by optimising the BRT system, which serves the same north-south route, it could transport more passengers than the subway, with a significantly lower investment.

But “Quito’s surface is saturated, there are no real dedicated lanes and the roads are narrow,” said Anderson, stressing the greater speed and efficiency of the subway, which benefits both passengers and the environment.

Building the subway will cost just over two billion dollars, “that is 89 million dollars per kilometre, a figure that is below the region’s average,” said the manager of the Quito subway.

The project was designed by the Spanish public company Metro de Madrid. A fare of 45 cents of a dollar will cover the first line’s operational and maintenance costs, according to the company.

But Ricardo Buitrón, an activist with Acción Ecológica, said “They will cost much more than that,” noting that building a subway in Quito is complex and arguing that it cannot be cheaper than in Panama, for example, where each kilometre cost 128 million dollars to build. 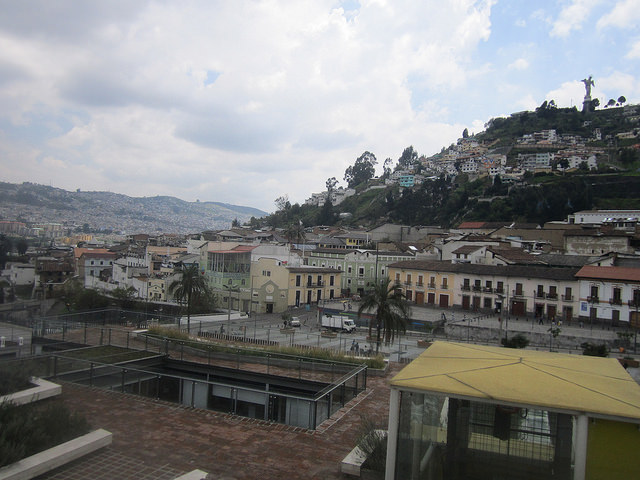 The Cerro del Panecillo hill, which divides north from south of Ecuador’s capital, seen from the Museum of the City, at the heart of the historic centre. The rugged topography represents a challenge to mobility in this highlands city. Credit: Mario Osava/IPS

Besides, with what is being invested in the subway “260 kilometres of exclusive lanes for electric buses plus 40 kilometres of tramways could be created, like the system being built in Cuenca,” in southern Ecuador, he told IPS.

And a 45 cent fare will require subsidies, which he estimated at 100 million dollars annually. In other countries, the operational cost per passenger is over 1.5 dollars, he said.

“Subsidies are inevitable in public transport, but they should contribute to improving the system,” said Buitrón. In Quito, for example, they should bolster the use of electric buses, remedying the setback represented by the replacement of electric articulated buses with diesel-run buses that are more economical, he said.

In Ecuador, diesel fuel is poor quality and heavily polluting, as seen in the black smoke they emit, he said.

“The subway is a good solution, which will reduce the use of private buses that pollute, and will help solve congestion in a city where the traffic passes through the north-south corridor,” said Julio Echeverría, executive director of the Instituto de la Ciudad and former professor of political science in several universities in Ecuador and Italy.

But this responded to a “linear and longitudinal” moment in Quito’s urban development which is long past. Now the city has changed, it is “scattered, fragmented, it stretches toward the valleys and other agricultural areas of great biodiversity,” he said.

Quito, with an estimated total population of 2.5 million, has the largest and least altered historic centre in Latin America, having been declared in 1978 a Cultural Heritage of Humanity site by the United Nations Educational, Scientific and Cultural Organisation (Unesco).

Founded in 1534 on a long and narrow plateau on the eastern slopes of the Andes Mountains next to the Pichincha volcano, some 2,800 metres above sea level, Ecuador’s capital has a very well preserved centre with more than 50 churches, chapels and monasteries, and dozens of squares.

The negotiated relocation of some 7,000 street vendors to formal markets in 2003, and a pedestrianisation of the historic centre program carried out in the first decade of the century, bringing art to the squares and streets every Sunday, helped to attract local residents and growing numbers of tourists.

The great impact of building a subway under the old city worries many people. “The subway is not a good thing for the poor; it is faster than the trolley bus, but more expensive,” said 52-year-old Manuel Quispe, who earns a living cleaning shoes in Plaza de San Francisco.

Jorge Córdoba, another shoe shiner in the square, agreed that the subway is faster, but told IPS he believes it will be impossible to build, since “Quito was built on filled-in gullies” and it will be hard to open tunnels. He complained, like Quispe, of the many months that the works have been stalled, blocking half of the square and reducing their already meagre incomes.