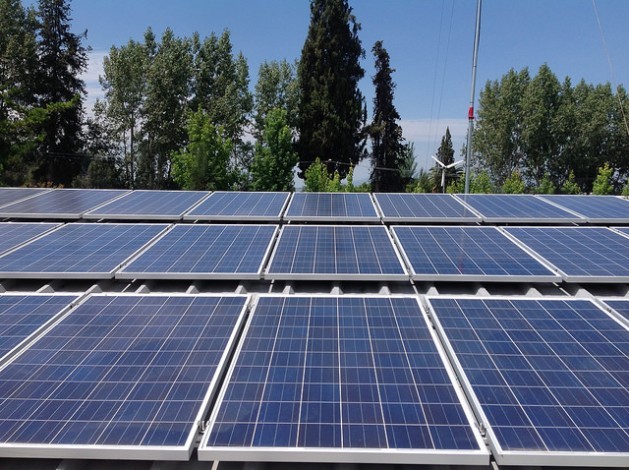 Panels at the Buin 1 Solar Plant, the first plant in Chile financed with shares sold to citizens, are ready to generate 10 KW, 75 per cent of which will be consumed by the participating households while the remainder will go into the national grid. Credit: Orlando Milesi/IPS

This South American country of nearly 18 million people has projects in non-conventional renewable energies (NCRE) for a combined total of nine billion dollars over the next four years, in the effort to reduce its heavy dependency on fossil fuels, which still generate more than 55 per cent of the country’s electricity.

Now ecologists have come up with the first project that incorporates citizens in the production and profits generated by NCRE, in particular solar power.

The small 10-KW photovoltaic plant will use solar power to generate electricity for the participating households and the surplus will go into the national power grid.

This will allow the “citizen shareholders“ taking part in the initiative to receive profits based on the annual inflation rate plus an additional two per cent.

“The objective is to create a way for citizens to participate in the benefits of solar power and the process of the democratisation of energy,“ said Manuel Baquedano, head of the Institute of Political Ecology, which is behind the initiative.

The Buin 1 Solar Plant will start operating commercially this month in Buin, a suburb on the south side of Santiago. Its main client is the Centre for Sustainable Technology, which from now on will be supplied with the power produced by the plant.

“In Chile we have experienced an important development of solar energy, as a consequence of the pressure from citizens who did not want more hydroelectric dams. This paved the way for developing NCREs,“ Baquedano told IPS.

“But solar power development has been concentrated in major undertakings, with solar plants that mainly supply the mining industry. And the possibility for all citizens to be able to benefit from this direct energy source had not been addressed yet.” 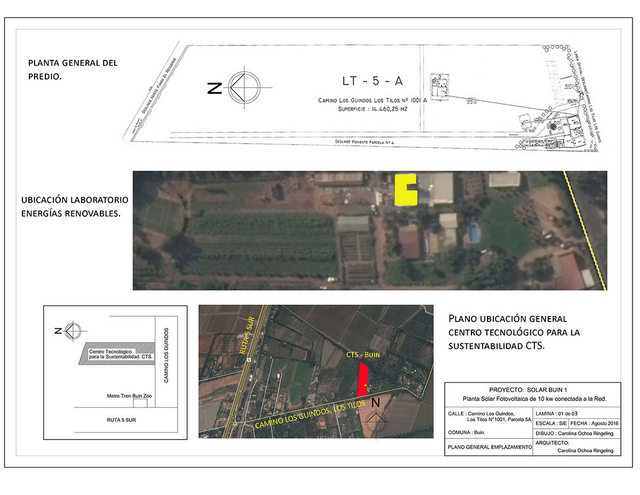 General map of the location of the Centre for Sustainable Technology, where future technicians in non-renewable energies study, and which is the main client of the Buin 1 Solar Plant, the first citizen solar power plant in Chile. Credit: Courtesy of Camino Solar

The environmentalist said “we decided to organise a business model to install these community solar power plants using citizen investments, since there was no support from the state or from private companies.”

The model consists of setting up a plant where there is a client who is willing to buy 75 per cent of the energy produced, and the remaining power is sold to the national grid.

The Buin 1 Solar Plant required an investment of about 18,500 dollars, divided in 240 shares of some 77 dollars each. The project will be followed by similar initiatives, possibly in San Pedro de Atacama, in the north of the country, Curicó in central Chile, or Coyhaique in Patagonia in the south.

The partners include engineers, journalists, psychologists, farmers, small business owners, and even indigenous communities from different municipalities, interested in replicating this model.

The subway, another example

A symbolic illustration of progress made with solar power is the Santiago Metro or subway. It was announced that 42 per cent of the energy that it will use as of November 2017 will come from the El Pelicano solar power project.

This plant, owned by the company SunPower, is located in the municipality La Higuera, 400 km north of Santiago, and it cost 250 million dollars to build.

“The subway is a clean means of transport… we want to be a sustainable company, and what is happening now is a major step, since we are aiming for 60 per cent NCREs by 2018,” said Fernando Rivas, the company´s assistant manager of environment.

El Pelícano, with an expected generation of 100 MW, “will use 254,000 solar panels, which will supply 300 gigawatt hours a year, equivalent to the consumption of 125,000 Chilean households,” said Manuel Tagle, general manager of SunPower.

Dionisio Antiquera, a farmer from the Diaguita indigenous community from northern Chile, who lives in Cerrillos de Tamaya, in Ovalle, 400 km north of Santiago, bought a share because “I like renewable energy and because it gives participation to citizens, to the poor.“

“There are many ways of participating in a cooperative,” he told IPS by phone.

Jimena Jara, assistant secretary for the Ministry of Energy, underlined the progress made in the development of NCREs and estimated that “investment in this sector could reach about nine billion dollars between 2017 and 2020.“

“Considering the projects that are currently in the stage of testing in our power grids, more than 60 per cent of the new generation capacity between 2014 and the end of 2016 will be non-conventional renewable energies,” she told IPS.

”Chile has set itself the target for 70 per cent of power generation to come from renewable sources by 2050, and 60 per cent by 2035. We know that we are making good progress, and that we are going to reach our goal with an environmentally sustainable and economically efficient energy supply,” said Jara.

This boom in NCREs in Chile, particularly solar and wind power, is underpinned by numbers, such as the reduction of the cost of electricity.

As of November 2016, the annual average marginal cost of energy in Chile´s central power grid, SIC, which covers a large part of the national territory, was 61 dollars per mega-watt hour (MWh), a fall of more than 60 per cent with respect to 2013 prices.

SIC´s Power Dispatch Center said that this marginal cost, which sets the transfer value between generating companies, is the lowest in 10 years, and was lower than the 91.3 dollars per MWh in 2015 and the nearly 200 MWh in 2011 and 2012, caused by the intensive use of diesel.

David Watts, of the Pontifical Catholic University of Chile Electrical Engineering Department, told IPS that “solar and wind energy have offered competitive costs for quite some time,” and for this reason have permanently changed Chile´s energy mix.

“In the past, Chile did not even appear in the renewable energy rankings. Now it ranks first in solar power in Latin America and second in wind power,” he said.

The expert said “this energy is spreading and we expect it to continue to do so over the next couple of years, when the battery of projects that were awarded contracts in the last tendering process of regulated clients,” those which consume less than 500 KW, come onstream.

Once the economy recovers from the current weak growth levels, “we hope that a significant proportion of our supply contracts with our non-regulated clients (with a connected power of at least 500 KW) will also be carried out with competitive solar and wind power projects,“ said Watts.

“There is no turning back from this change. From now on, some conventional project may occasionally be installed if its costs are really competitive,“ he said.

Watts, who is also a consultant on renewable energies at the Ministry of Energy, pointed out that the growth in solar and wind power was also driven by changes in the country’s legislation, which enabled energy to be offered in blocks, and permitted the simultaneous connection of NCREs to the grid.

The report New Energy Finance Climatescope, by Bloomberg and the Inter-American Development Bank (IDB), ranked Chile as the country that invests the most in clean energies in Latin America, only surpassed by China in the index, which studies the world’s major emerging economies.

Commenting on the report, published on December 14, Bachelet said “we invested 3.2 billion dollars last year (2015), focusing on solar power, especially in solar photovoltaic installations, and we are also leading in other non-conventional renewable energies.”

“We said it three years ago, that Chile would change its energy mix, and now I say with pride that we have made progress towards cleaner and more sustainable energies,“ she said.