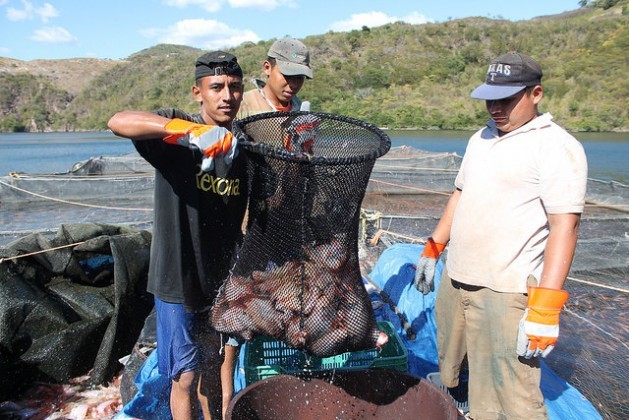 Employees of Grupo Ideal, a participatory company in the village of Paso Real, pull out tilapias ready to be sold, from the José Cecilio del Valle reservoir. An innovative credit system is helping family farmers in poor rural areas of Honduras, who have been excluded by the banking system. Credit: Thelma Mejía/IPS

PASO REAL, Honduras, Feb 8 2017 (IPS) - In this village in southern Honduras, in one of the poorest parts of the country, access to credit is limited, the banking sector is not supportive of agriculture, and nature punishes with recurrent extreme droughts.

But over the past two years, the story has started to change in Paso Real, a village of about 60 families, with a total of just over 500 people, in the municipality of San Antonio de Flores, 72 kilometres from Tegucigalpa.

A group of family farmers here, just over 100 people, got tired of knocking on the doors of banks in search of a soft loan and opted for a new financing model, which the United Nations Food and Agriculture Organisation (FAO) decided to test in this impoverished Central American country.

The initiative involves the creation of development financing centres (FCD), so far only in two depressed regions in Honduras: Lempira, to the west, and the Association of Municipalities of North Choluteca (Manorcho), to the south.

Both areas form part of the so-called dry corridor in Honduras, that runs through 12 of the country’s 18 departments, which are especially affected by the impacts of climate change.

Paso Real is part of Manorcho, composed of the municipality of San Antonio de Flores plus another three –Pespire, San Isidro and San José – which have a combined population of more than 53,000 people in the northern part of the department of Choluteca, where people depend on subsistence farming and small-scale livestock-raising.

Rafael Núñez is one of the leaders of Grupo Ideal, a company that is an association of family farmers who also breed and sell tilapia, a freshwater fish very popular in Central America. In addition, they raise cattle and grow vegetables.

Núñez is pleased with what they have achieved. Even though his family already owned some land, “it was of no use because nobody would grant us a loan.”

“The banks would come to assess our property, but offered loans that were a pittance with suffocating interest rates. They never gave us loans, even though we knocked on many doors,” Nuñez told IPS.

“But now we don’t have to resort to them, we have gained access to loans at the development financing centre in Menorcho, at low interest rates,” he said, smiling.

Nuñez said that because the banks would not lend them money, they had to use credit cards at annual interest rates of 84 per cent, which were strangling them. Now the loans that they obtain from the FCD are accessible, with an annual interest rate of 15 per cent. 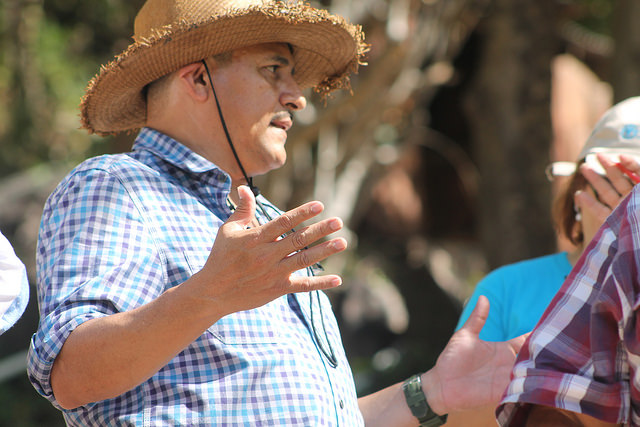 Farmer Rafael Núñez told Central American visitors how the banking system mistreats small farmers in Honduras, and how the introduction in their municipality, San Antonio de Flores, of a financial centre for development which the FAO is testing in two depressed areas in the country, has improved their lives. Credit: Thelma Mejía/IPS

“It has not been easy to get on our feet because the banking system here doesn’t believe in agriculture, let alone family farming. I collect the bank books that you see and someday I will frame them and I’ll go to those banks and tell them: thanks but we don’t need you anymore, we have forged ahead with more dignified options offered by people and institutions that believe in us,” said Nuñez with pride.

He shared his experience during a Central American meeting organised by FAO, for representatives of organisations involved in family farming and the government to get to know these innovative experiences that are being carried out in the Honduran dry corridor.

Nuñez showed the participants in the conference the tilapia breeding facilities that his association operates at the José Cecilio del Valle multiple-purpose dam, located in the village.

Grupo Ideal is a family organisation that divides the work among 11 siblings and offers direct jobs to at least 40 people in the area and generates indirect employment for just over 75 people. They are convinced that their efforts can be replicated by other small-scale producers.

Among the things that make him happy, Nuñez says they have started to improve the diet of people in the local area. 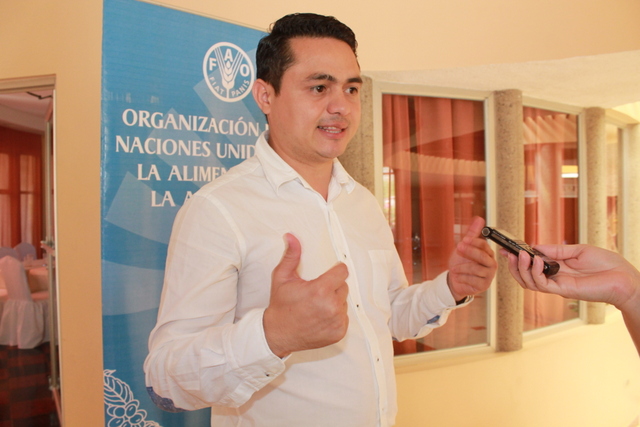 Marvin Moreno, the FAO expert technician behind this solidarity-based and inclusive innovative microcredit model, which so far has helped change the lives of 800 poor families. Credit: Thelma Mejía/IPS

“We eat with the workers, we work with them, side by side, and at lunch they used to only bring rice, beans and pasta, but now they bring chicken, beef, tilapia and even shrimp,” he said.

One requirement for working in the company is that employees have to send their children to school. “This is an integral project and we want to grow together with the village because there are almost no sources of employment here,” he said.

Marvín Moreno, the FAO expert who has been the driving force behind the two experimental FCD finance centres, told IPS that the new model of financing has allowed families to organise to access opportunities to help them escape poverty.

Participating in the FCDs are local governments, development organisations that work in the area and groups of women, young people and farmers among others, which are given priority for loans.

The innovative initiative has two characteristics: solidarity and inclusiveness. Solidarity, because when someone gets a loan, everyone becomes a personal guarantor, and inclusive because it doesn’t discriminate.

“The priority are the poor families with a subsistence livelihood, but we also have families with more resources, who face limited access to loans as well,” Moreno said.

“It’s a question of giving people a chance, and we’re showing how access to credit is changing lives, and from that perspective it should be seen as a right that must be addressed by a country’s public policies,” he said. 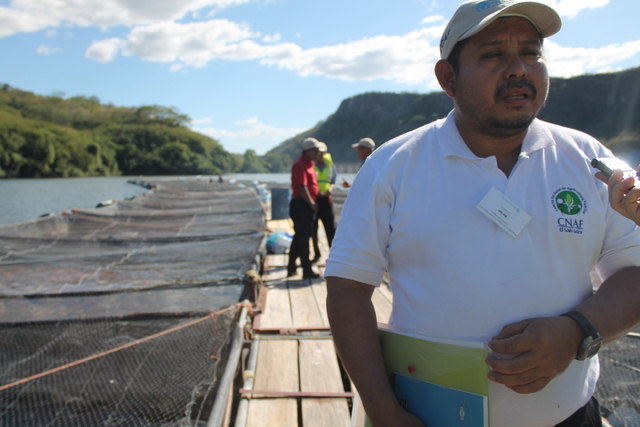 Abel Lara, a Salvadoran small-scale farmer, highlighted the experience of the financial centres developed by FAO in Honduras, which he says show that concentrating on local solutions close to farmers is key for supporting family agriculture. Credit: Thelma Mejía/IPS

This view is shared by Abel Lara, a small-scale farmer from El Salvador, who after learning about the experience, told IPS that this “basket of funds that makes available loans with joint efforts only comes to prove that it is possible to get family agriculture back on its feet, from the communities themselves..”

The two FCDs established by FAO in Honduras have managed to mobilise about 300,000 dollars through a public-private partnership between the community, organisations and local governments.

In the case of Manorcho, César Núñez, the mayor of San Antonio de Flores, said that “people are starting to believe that the financial centre offers a real opportunity for change and our aim here is to help these poor municipalities, which are hit hard by nature but have potential, to move forward.”

In a country of 8.4 million people, where 66.5 per cent of the population lives in poverty, access to loans as a boost to family agriculture can change the prospects for some 800,000 poor families living in the dry corridor.

These experiences, according to FAO representative in Honduras María Julia Cárdenas, will be part of the proposals for regional dialogue that the Central American Agricultural Council will seek to put the development of family agriculture on the regional agenda.