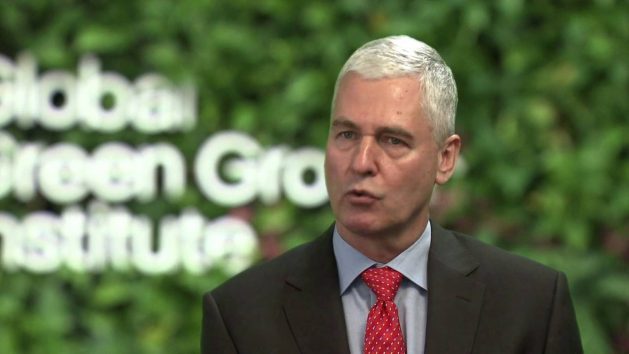 ULAANBAATAR, Sep 14 2017 (IPS) - Rapid growth of a coal-fired economy often leads to environmental degradation, and Mongolia is a case in point.

Alongside an impressive 5.3 percent GDP growth rate, the country has also been witnessing its worst levels of air pollution and is now trying hard to shift to a greener economic model, said experts at the Mongolian Sustainable Finance Forum (MSFF) 2017 held Sep. 14 in the capital of Ulaanbaatar.

"A key achievement of the forum this year was setting up of a new credit system called the Mongolia Green Credit Fund." --Frank Rijsberman, Director General of GGGI

Speaking exclusively to IPS on the sidelines of the event, Frank Rijsberman, Director General of the Seoul-based Global Green Growth Institute (GGGI), which is a key partner of the forum, said the forum had just helped establish a Mongolia Green Climate Fund which would see a flow of funds for projects that would bring in more green economic growth through cleaner energy, cleaner transport and projects to make Mongolia’s cities more sustainable.

“In Mongolia, the economy has grown very rapidly. That has led to some serious environmental issues. For example, Mongolia has used a lot of coal-based energy. As a result, it now has the worst level of air pollution in the region. If (the pollution in) in New Delhi is bad and worse in Beijing, then it’s the worst in Ulaanbaatar. In fact the country had to declare a national emergency over the brown haze,” said Rijsberman.

The MSSF, which is now in its 5th year, has been working to address this key challenge of poor air quality, besides other environmental issues such as renewable energy and sustainable cities. This year, the forum focused on roping in more partners and increasing the involvement and contribution of current ones in funding the green projects within Mongolia.

There were over 350 participants including national policy makers, business leaders, private sector investors, bankers, government officials, representatives of civic groups and international organizations. They came from a wide array of fields, including green development, sustainable finance, and innovative technologies.

“A key achievement of the forum this year was setting up of a new credit system called the Mongolia Green Credit Fund,” noted Rijsberman.

Highlighting his own organization’s involvement in the MSFF and the new credit system, Rijsberman said that GGGI was trying to help Mongolia develop “bankable projects” for the funders.

Mongolia is one of the largest coal-producing countries in the world. According to statistics shared by the Mongolia‘s Ministry of Energy, over 80 percent of the country’s energy is coal-fired. Statistics by other research organisations such as Index Mundi show the air pollution level, measured at 2.5 pm (particulate matter), is dangerously high, while the country’s annual carbon emissions are 14 metric tonnes.

However, the government has committed to achieve the 2030 Sustainable Development Agenda and the Paris Agreement by reducing its greenhouse gas emissions by 14 percent by 2030. Now, the country needs about seven billion dollars to finance its Nationally Determined Contributions (NDCs) focusing on energy efficiency, renewable energy, buildings, waste and transportation. The banking sector – the main participant and organizer of the MSFF – has agreed to accelerate sustainable finance initiatives and a green economy transition.

“Apart from that (seven billion dollars), businesses and small and medium-sized enterprises (SMEs) need an additional investment of 1.5 trillion dollars in the coming five years mostly for construction and manufacturing sector projects. Additionally, tackling critical sustainability issues such as air and soil pollution requires financing equal to 4.3 billion dollars. To fill in this investment gap, all partners – public, private and international organizations – need to act together,” said Orkhon O., President of the Mongolian Bankers Association.

There will be more such assessments in the future, with a special focus on tackling air pollution in Ulaanbaatar .

Asked how the Mongolian Sustainable Finance Forum is different from other Green Growth forums as the Global Green Growth Forum (3GF ) of Denmark or the Indonesia Sustainable Finance Forum, Rijsberman said that the forum in Mongolia was organized mainly by a group of banks including the Bank of Mongolia, Credit Bank, Trade & Development Bank and several others. So, it is a forum where investment is a high priority besides fostering partnerships.

“We are especially focusing on energy and sustainable cities and working closely with city and national government partners to improve the regulatory and institutional frameworks needed to launch a green, inclusive Public-Private-Partnership investment program,” he explained.