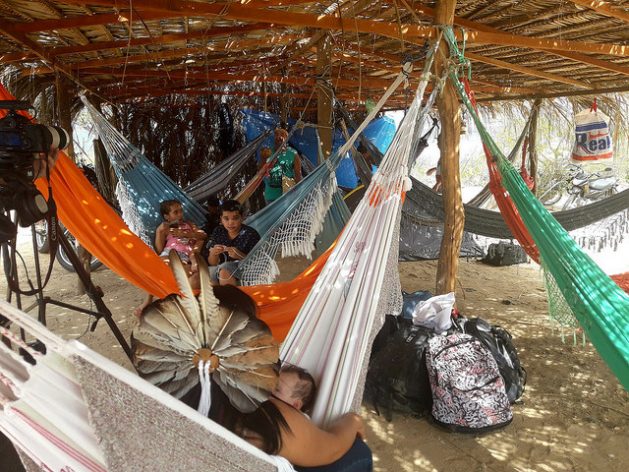 Tuxá families take a break while building their new village in Surubabel, as part of what they consider the recovery of their ancestral lands, on the bank of what was previously the river where they lived, the São Francisco River, but which now is a reservoir on the border between the Brazilian states of Pernambuco and Bahía. Credit: Fabiana Frayssinet / IPS

RODELAS, Brazil, Sep 30 2017 (IPS) - The Tuxá indigenous people had lived for centuries in the north of the Brazilian state of Bahia, on the banks of the São Francisco River. But in 1988 their territory was flooded by the Itaparica hydropower plant, and since then they have become landless. Their roots are now buried under the waters of the reservoir.

Dorinha Tuxá, one of the leaders of this native community, which currently has between 1,500 and 2,000 inhabitants, sings on the shore of what they still call “river”, although now it is an 828-sq-km reservoir, in the northeastern state of Pernambuco, along the border with the state of Bahia, to the south.

While singing the song dedicated to their “sacred” river and smoking her “maraku”, a pipe with tobacco and ritual herbs, she looks dreamily at the waters where the “Widow’s Island” was submerged, one of several that sprinkled the lower course of the São Francisco River, and on which the members of her community used to live.

“What nostalgia for that blessed land where we were born and which did not let us lack for anything. The river where we used to fish. I have such nostalgia for that time, from my childhood to my marriage. We were indeed a suffering and stoic but optimistic people. We grew rice, onions, we harvested mangoes. All that is gone." -- Manoel Jurum Afé

The hydroelectric plant, with a capacity of 1,480 megawatts, is one of eight installed by the São Francisco Hydroelectric Company (CHESF), whose operations are centered on that river which runs across much of the Brazilian Northeast region: 2,914 km from its source in the center of the country to the point where it flows into the Atlantic Ocean in the northeast.

After the flood, the Tuxá people were relocated to three municipalities. Some were settled in Nova Rodelas, a hamlet in the rural municipality of Rodelas, in the state of Bahia, where Dorinha Tuxá lives.

After a 19-year legal battle, the 442 relocated Tuxá families finally received compensation from the CHESF. But they are still waiting for the 4,000 hectares that were agreed upon when they were displaced, and which must be handed over to them by state agencies.

“What nostalgia for that blessed land where we were born and which did not let us lack for anything. The river where we used to fish. I have such nostalgia for that time, from my childhood to my marriage. We were indeed a suffering and stoic but optimistic people. We grew rice, onions, we harvested mangoes. All that is gone,” Tuxá chief Manoel Jurum Afé told IPS.

The new village is very different from the community where they used to live on their island.

Only the soccer field, where children play, retains the shape of traditional indigenous Tuxá constructions.

But the elders strive to transmit their collective memory to the young, such as Luiza de Oliveira, who was baptized with the indigenous name of Aluna Flexia Tuxá.

She is studying law to continue her people’s struggle for land and rights. Her mother, like many other Tuxá women, also played an important role as chief, or community leader.

“It was as if they lived in a paradise. They had no need to beg the government like they have to do now. They used to plant everything, beans, cassava. They lived together in complete harmony. They talk about it with nostalgia. It was a paradise that came to an end when it was flooded,” she said. 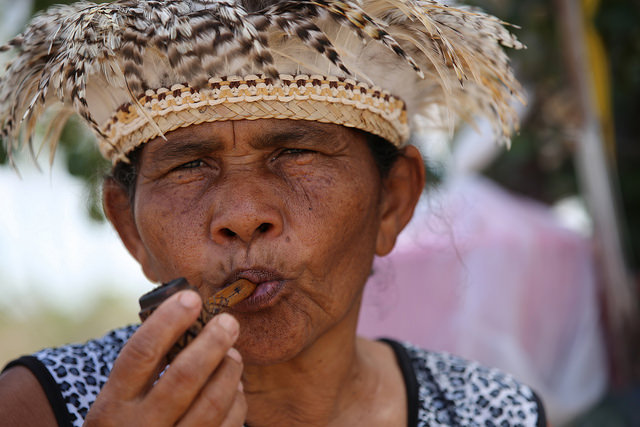 Dorinha Tuxá, a leader of the native Tuxá people, sings to her sacred river and smokes her “marakú”, a pipe with tobacco and ritual herbs, to ask her ancestors to help them get the lands which were promised to them when they were evicted from their island to make way for a dam in northeastern Brazil. Credit: Gonzalo Gaudenzi / IPS

After three decades of living with other local people, the Tuxás stopped wearing their native clothes, although for special occasions and rituals they put on their “cocares” (traditional feather headdresses).

They welcomed IPS with a “toré” – a collective dance open to outsiders. Another religious ceremony, “the particular”, is reserved for members of the community. That is how they honour the “enchanted”, their spirits or reincarnated ancestors.

But they are also Catholics and very devoted to Saint John the Baptist, patron saint of Rodelas, which was named after Captain Francisco Rodelas, considered the first chief who fought alongside the Portuguese against the Dutch occupation of northeast Brazil in the 17th century.

“The waters covered the land where our ancestors lived. Many times I saw my grandfather sitting at the foot of a jua (Ziziphus joazeiro, a tree typical of the eco-region of the semi-arid Northeast), there on the island talking to them up there (in the sky),” he said.

“We lost all that. That place which was sacred to us was submerged under water,” he said, sadly.

The Tuxá people, who for centuries were fishermen, hunters, gatherers and farmers, practically gave up their subsistence crops in their new location.

Some bought small parcels of land and grow cash crops, such as coconuts.

“We need to improve our quality of life. Before we used to live on what we produced from agriculture and fishing. Today that is not possible, so we want to return to agriculture, and to do that we need our land,” Chief Uilton Tuxá told IPS.

In 2014, a decree declared some 4,392 hectares of land an “area of social interest” in order to expropriate it and transfer it to the Tuxá people.

In June of this year, they won a lawsuit in a federal court, which ruled that the National Indigenous Foundation (Funai) had three months to create a working group to begin the demarcation process. It also set
a new compensation to be paid to the Tuxá people.

But distrustful of the state bureaucracy and the courts, the Tuxá people decided to occupy Surubabel, the area near their village, on the banks of the reservoir, which was expropriated in order for it to be demarcated in their favor, but this never happened.

They began to build a new village there, in what they call “the recovery” of their lands.

“The occupation of this land by us, the Tuxá people, represents the rekindling of the flame of our identity as an indigenous people native to this riverbank. We were already here, since the beginning of the colonization process, even in the 16th century when the first catechists arrived,” argued Uilton Tuxá.

“We want to build this small village for the government to fulfill its obligations and the order to delimit our territory,” he said.

During the week they have other activities. They are public employees or work on their plots of land. But on Saturdays they load their tools in their vehicles and build their houses in the traditional way.

“Nowadays a lot of land in this sacred territory of the Tuxás is being invaded by non-indigenous people and also by indigenous people from other ethnic groups,” chief Xirlene Liliana Xurichana Tuxá told IPS.

“We were the first indigenous people from the Northeast to be recognized and we are the last to have the right to our land. This is just the beginning. If the justice system does not grant us our right to continue the dialogue, we will adopt forceful measures, we will mobilise. We are tired of being the good guys,” she warned, speaking as a community leader.

Meanwhile, the small portion of their ancestral land that was not submerged, and the land they occupy now, are threatened by new megaprojects.

These lands were left in the middle of two canals, on the north axis of the diversion of the São Francisco River, a project that is still under construction, which is to supply 12 million people with water.

“The Tuxá people have suffered impacts, above and beyond the dam. There is also the diversion of the river and the possibility that they might build a nuclear plant will also affect us,” said Uilton Tuxá, smoking his marakú during a break.

They say the marakú attracts protective forces. And this time they hope these forces will help them to get the land promised to them when their ancestral land was taken away, and that they will not lose it again to new megaprojects.