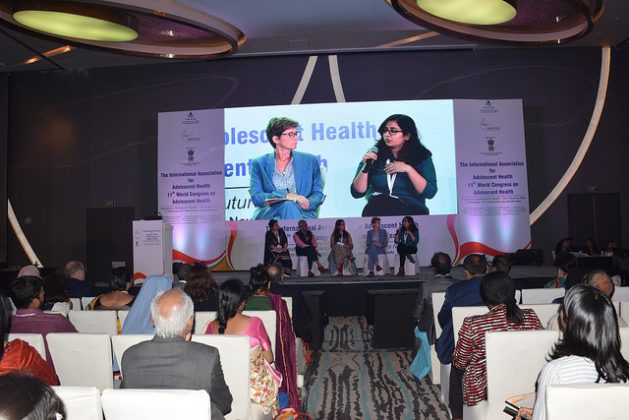 NEW DELHI, Oct 30 2017 (IPS) - Twenty-year-old Gogontlejang Phaladi of Mahalapye, Botswana is grateful she was never sent to a so-called “hyena” like scores of girls in neighboring Malawi were.

In a ritual approved by the community, a solo man (the hyena) would have sex with the adolescent girls of an entire village to “sexually cleanse” them so they would be considered fit for marriage.

"It makes sense to bring village and religious leaders in this conversation on violent crimes. After all, most of them are validated by the society and traditions.” --Gigi Phaladi

“I am so glad that in Botswana we do not have hyenas, but we face other forms of sexual violence such as stepfathers molesting stepdaughters and giving them HIV,” says Phaladi, founder of Pillar of Hope, a project that counsels, educates and trains local adolescents to tackle these challenges.

Last week, Phaladi attended the 11th World Congress on Adolescent Health which was held in New Delhi and focused on different health aspects of youth in the age group of 10-24. Speaking to an audience that included diplomats, bureaucrats, researchers, doctors and activists, Phaladi stressed that if the problems of adolescents were to be truly addressed, they had to be involved in the process.

Talking to IPS on the sidelines of the Congress later, Phaladi said that there were adolescents who experienced the most heinous and violent crimes across the world such as sexual assaults, trafficking, violent social norms and religious practices of violent crime.

Aside from HIV, beating, molestation, and sexual exploitation at schools by teachers – the challenges faced by adolescents were multiple. But the adolescents directly affected by the violence and crime were not included in the process to address them.

“You see, the laws in these countries are not firm enough to protect the adolescents from these crimes. So, it’s not just a health issue, but a governance deficiency and we need to talk about this at such events, from the adolescents themselves,” she said.

Unfortunately, violent crimes like sexual slavery, hyenas, molestation at schools or breast ironing – another crime reported widely from Western Africa – were missing from the Congress on Adolescent Health, as were issues of cross-border sex trafficking of adolescent boys and girls in Asia and community-backed forced prostitution of young women in India. Mental health was discussed as a generic issue, but rising cases of mental illness in militarized and conflict zones were also missing.

Lack of Studies and Data

A big reason behind this could be lack of any data, said Rajib Acharya, a researcher from Population Council of India, a New Delhi-based NGO researching population issues across India. Acharya just conducted a study of 20,000 adolescents aged 10-14 in two states of India – Bihar and Uttar Pradesh.

Presented at the Congress, the study showed, among others, severe levels of anemia among the adolescents. According to the study, 1.2 million and 2.8 million are severely anemic, respectively, in these two States.

But it took four months and a team of 50 researchers to interview the adolescents on nutrition and sexual and reproductive health.  Three weeks were spent on training the researchers, and analyzing the data took another four to five months. To generate data on multiple issues would mean multiplying the investment of this time, effort and money, Acharya reminded.

He also said that if the issue was complicated, sensitive and involved  traveling to conflict zones, it was less likely to be taken up for research as gathering credible date would be incredibly hard.

Forums like the Congress should ideally be utilized to bring on the hard-hitting issues related to adolescents,  said Thant Aung Phyo, a young sexual and reproductive healthcare activist in Myanmar. Pointing out the severe restrictions on adolescents in accessing abortion care, Phyo said, “The rigid government policies and social traditions that restrict the rights of adolescents need to be brought up and discussed at forums like this.”

Myanmar is currently caught in a human rights  disaster where over a million Rohingyas had been forced to flee their homes, taking refuge in neighboring countries including Bangladesh, India and Thailand.  The refugees included hundreds of thousands of adolescents who are living in trauma, poverty, fear and uncertainty.

Decribing their suffering as “unfathomable” and “unprecedented”, Kate Gilmore,  Deputy High Commissioner of the UN Human Rights Commission, says that refugee and migrant adolscents  across the world must be provided  free and regular healthcare as a right.

“Migrant adolescents must have access to healthcare without the fear of being reported, detained and deported,” Gilmore said.

India, home to the world’s largest adolescent population (253 million), launched  an adolescent-specific program in 2014 – the first country in the world to do so on such a scale. Titled Rashtriya Kishor Swasthya Karyakram (KRSK), the program aimed at improving health and nutrition of adolescents besides protecting them against violence and injuries.

It is currently run in 230 of the country’s 707 districts,  but even after three years, there was  little data available on the program’s impact. The data presented at the event by the health ministry of India at the Congress only specified the facilities built by the government so far (700 adolescent health clinics) and services provided (training over 20,000 adolescents as peer educators).

However, the selection of the peer educators and the skills of the field workers had been questioned by experts from the non government sector.

“The peer educator component is the most controversial aspect of the program. The skill of the workforce on the ground is also questionable,” observed Sunil Mehra, one of the pioneers on adolscent health in India and head of Mamta Health Institute for Mother and Child which coorganised the Congress.

Agreed Rajib Acharya: “If we spoke with community level  health workers, we would see  that only 5 or 6 out of  every 30 or 40 knew what they were supposed to say or do to adolescent patients.”

On Saturday, however,  the ministry  announced certain changes  to improve the RKSK program and monitor certain services  Said Ajay Khera, Deputy Commissioner (Adolescent Health) at the minsitry, the government would “now make the program  promotion and prevention-centric and monitorable”.

The ministry would particularly monitor its  Weekly Iron Folic Supplementation (WIFS) programme  on digital platforms to tackle anemea among adolescents. A special toolkit called “Sathiya” was also launched at the World Congress on Friday for better peer education. The Toolkit—available both in print and online – focused on six broad themes of the RKSK such as integrated child health , sexual and reproductive health, injuries and violence, nutrition, substance abuse and mental health.

There are other instituions and systems that  India and other countries could make better use of  to address the “wicked problems” faced by the adolescents, reminded  Anthony Costello, Director, Department of Maternal, Newborn, Child and Adolescent Health at the World Health Organization (WHO).

“Promoting greater interaction among adolescents of different age and sex is one. Involving parents in learning of the health issues of adolescents is another. Talking of difficult and disturbing issues like breast ironing, rape, trafficking is yet another. We need to use all of these,” Costello told IPS.

Gigi Phaladi added that traditioonal and religious leaders  also must be roped in to talk about adolescents. In Botswana, she said, pastors in churches were urged to talk of gender violence, HIV and other gender-based crimes.

“People were surprised to hear their religious leaders talk about sex etc, but they also started paying attention. The general feeling among people was ‘if the pastors do not feel hesitant to talk about these issues, why should we?’ So, it makes sense to bring village and religious leaders in this conversation on violent crimes. After all, most of them are validated by the society and traditions,”she said.