Scott Morris is a senior fellow and director of the U.S. Development Policy Initiative at the Center for Global Development. He served as deputy assistant secretary for development finance and debt at the U.S. Treasury Department during the first term of the Obama administration.

WASHINGTON DC, Mar 14 2018 (IPS) - Chinese officials have been adept at ascribing a vision for the “Belt and Road” initiative (BRI) that garners support from a wide array of countries, as well as international institutions like the World Bank and International Monetary Fund (IMF). 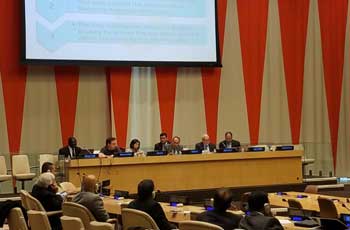 The panel during the G77 event on debt restructuring. Credit: G77/IPS

The appeal is simple. China is offering to mobilize trillions of dollars in capital for something that all countries, rich and poor, crave: infrastructure. But as the vision moves to implementation, the Chinese government and its BRI partners would do well to address its key vulnerabilities.

High on the list is China’s go-it-alone approach to managing debt problems, evident in high-profile cases like Venezuela and in lesser-known situations like Sri Lanka and Tajikistan. The World Bank and other international institutions, which seek to lend their names to the BRI, have an obligation on behalf of their member countries to press the Chinese on a legacy of opaque and ad hoc debt workout arrangements.

These arrangements often prove to be a bad deal for distressed borrowers and are misaligned with global development objectives, which are pinned on principles of transparency and sustainability. For the Chinese themselves, unilateralism on debt is increasingly problematic.

Not only does it contribute to a political backlash in debtor countries, it makes Chinese financial interests increasingly vulnerable in the absence of the kinds of protections afforded to Paris Club creditors. In fact, this club of rich-country lenders was formed not to look out for the interests of debtors but to use collective action to ensure repayment from recalcitrant borrowers.

In practice, the disciplines, transparency, and predictability of the Paris Club’s approach, working in concert with the IMF and multilateral development banks, has proved to be beneficial for creditors and borrowers alike.

In new research, we identify eight BRI countries that could be pushed into debt distress due to lending under the initiative. That’s a relatively small share of the 68 countries associated with the BRI. But for these eight, which include Pakistan, Djibouti and Laos, China’s past behavior as a creditor ought to be a source of concern.

Unlike the world’s other leading government creditors, China has not signed on to a binding set of rules of the road when it comes to avoiding unsustainable lending and addressing debt problems when they arise. China’s rapid emergence from poor country to the world’s creditor has meant that sound policy frameworks around debt management, such as the approach of the Paris Club, have not caught up to China’s role as lender today.

Given China’s dominant role as an official creditor, it may be asking too much of Chinese officials to simply sign on to the set of rules and disciplines of a G-7-dominated forum like the Paris Club. Whether it is the club itself, or some new arrangement that holds closely to key principles of transparency and collective action, China would do well to step up on the debt front as the BRI gets underway.

Firmer commitments on responsible lending go beyond lending transparency and include clearer disciplines around lending terms and loan volumes, as well as project standards that help to ensure positive economic returns such as open and competitive procurement.

China can claim success when it comes to a vision for the BRI that has gained widespread support. The way forward demands a clear policy framework aligned with global standards, something that has been absent from China’s lending practices to date.

Whether Chinese officials have the will to pursue this approach will be critical in determining the ultimate success or failure of the BRI.