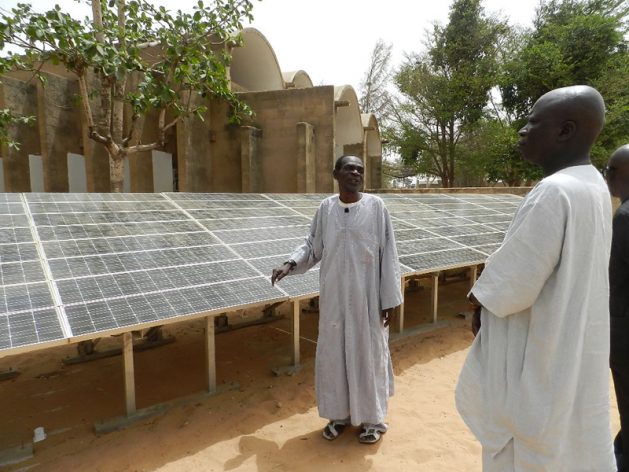 Less than six months later, that November, the mantle was passed over to Burkina Faso as a 33MW solar power plant on the outskirts of the country’s capital, Ouagadougou, went online. But as in the case of Senegal, it is a title that Burkina Faso won’t hold for long as another West African nation, Mali, plans to open a 50MW solar plant by the end of this year.

What may seem like increasing rising investment in renewables in West Africa is a combination of public-private partnerships and strong political will by countries to keep the commitments made in the Paris Agreement.

“It’s like a healthy competition…In Senegal in 2017 there have a been a number of solar plants that have quite a sizeable volume of production feeding into the electricity network. And this is turning out to be a common trend I think. Because it is one of the ways to actually fill the gap in terms of electricity, affordability and access,” says Mahamadou Tounkara, the country representative for the Global Green Growth Institute (GGGI) in Senegal and Burkina Faso. The institute has a mandate to support emerging and developing countries develop rigorous green growth economic development strategies and works with both the public and private sector.

What may seem like increasing rising investment in renewables in West Africa is a combination of public-private partnerships and strong political will by countries to keep the commitments made in the Paris Agreement, a global agreement to tackle climate change. In the agreement countries declared their nationally determined contributions (NDCs), which are outlines of the actions they propose to undertake in order to limit the rise in average global temperatures to well below 2°C. According to an 2017 International Renewable Energy Agency (IRENA) report, 45 African countries have quantifiable renewable energy targets in their NDCs.

However, many African countries still rely heavily on fossil fuels as a main energy source.

And while the countries are showing good progress with the implementation of renewables, Dereje Senshaw, the principal energy specialist at GGGI, tells IPS that it is still not enough. He acknowledges though that the limitation for many countries “is the difficulty in how to attract international climate finance.”

In a 2017 interview with IPS, IRENA Policy and Finance expert, Henning Wuester, said that there was less than USD10 billion investment in renewables in Africa and that it needed to triple to fully exploit the continent’s potential.

Representatives from Burkina Faso, Cote d’Ivoire, Gambia, Guinea and Senegal will meet in Ouagadougou from Jun. 26 to 28 at a first ever regional capacity development workshop on financing NDC implementation in the energy sector. One of the expected outcomes of the workshop, organised by GGGI, IRENA and the Green Climate Fund, is that these countries will increase their renewable energy target pledges and develop concrete action plans for prioritising their energy sectors in order to access climate funding.

Senshaw points out that these West African countries, and even those in sub-Saharan Africa where most of the energy source comes from hydropower and biomass, “can easily achieve 100% renewable energy.”

“Increasing their energy target means they are opening for climate finance. International climate finance is really willing to [provide] support when you have more ambitious targets,” he says.

IRENA estimates that Africa’s potential for renewables on the continent is around 310 GW by 2030, however, only 70 GW will be reached based on current NDCs.

While the opportunities for investment in renewables “is quite substantial,” African countries have lacked the capacity to access this, according to Tounkara.

“One reason is the quality of their portfolio of programs and projects. It is very difficult to attract investment if the bankability of the programmes and projects are not demonstrated,” Tounkara says.

Senegal, Mali and Burkina Faso have built their solar plants with public-private sector funding, with agreements in place that the energy created will be sent back to their country’s power grid. But, despite having the largest solar plant in West Africa, only about 20 percent of Burkina Faso’s 17 million people have access to electricity.

Toshiaki Nagata, senior programme officer for NDC implementation at IRENA, adds that public finance needs to be utilised in a way that leverages private finance.

“To this end, public finance would need to be used beyond direct financing, i.e., grants and loans, to focus on risk mitigation instruments and structured finance mechanisms, which can help address some of the risks and barriers faced by private investors.”

Mitigation instruments are staring to be used in Africa, with GGGI recently designing instruments for Rwanda and Ethiopia. In addition, Senegal’s Ministry of Finance requested GGGI and the African Development Bank design a financing mechanism for the country. It is called the Renewable Energy and Energy Efficiency Fund (REEF).

“The REEF is a derisking mechanism that [Senegal] had to have in place so that the local banks are interested in financing renewable energy projects and energy-efficiency projects,” says Tounkara.

“That is the kind of mechanism that we think is going to be needed in countries to make sure that we accelerate the access to climate finance,” Tounkara says, adding that GGGI will provide the technical assistance for capacity building needs of the banks as well as the projects developers and project promoters.

“By filling that gap we actually increase the interest of the investors, particularly of the local banks and the local financing institutions, to get on board and then invest in renewable energy as well as supporting the private sector to have the necessary capacity,” Tounkara says.