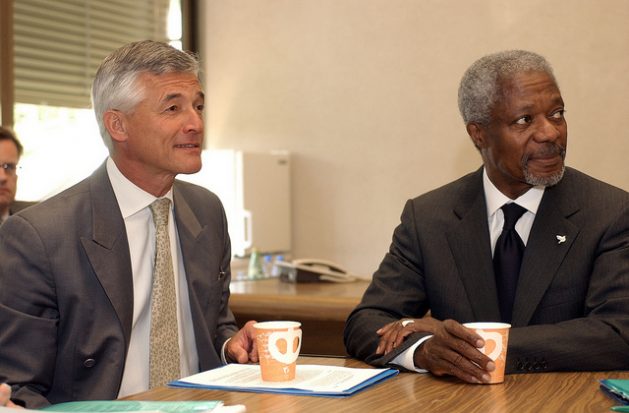 RÍO DE JANEIRO, Aug 21 2018 (IPS) - Kofi Annan’s stature as a global leader grew after he finished his second term as United Nations Secretary-General in 2006. Time confirmed his excellence in defending the principles and values of multilateralism, which is currently on the decline and subject to all kinds of attacks.

Some of the crucial actions carried out by Annan, who died on Aug. 18, such as condemning the U.S.-led invasion of Iraq, had the key backing of two Brazilian diplomats.

Sergio Vieira de Mello, who died in Baghdad on Aug. 19, 2003, was U.N. High Commissioner for Human Rights and Annan’s right-hand man in dealing with conflicts and rebuilding shattered nations.

He was sent to Iraq as the secretary-general’s special representative in May 2003, two months after the invasion, a spectacle of violence and bombings instantly reported by the global media.

A truck bomb destroyed the Canal Hotel used as a U.N. office in Baghdad.

Vieira and 21 other U.N. officials were killed in the suicide attack by the Al-Zarqawi organisation, the seed of what would later call itself the Islamic State (IS), according to Carolina Larriera, Vieira’s Argentine widow and a member of his team who survived in the rubble.

In memory of the victims, the U.N. General Assembly decided in 2008 to designate Aug. 19 as World Humanitarian Day, dedicated to all those who risk their lives to assist people affected by armed conflicts and other crises.

Vieira, a Brazilian who worked at the U.N. since he was 21, died at the age of 55 as a hero of humanitarian and peace operations in the most dangerous situations, in Bangladesh, Sudan, Cyprus, Mozambique, Peru and Iraq.

He mediated conflicts in Cambodia, Lebanon, Rwanda and other countries, while in Kosovo and East Timor he supported the “building of new nations.”

Between 1999 and 2002 he led the U.N. peacekeeping forces that oversaw the transition to independence of East Timor, a former Portuguese colony occupied by Indonesia since 1975.

The son of a Brazilian diplomat, Vieira rose through the ranks of the United Nations, occupying positions in its refugee and human rights agencies.

He reached the peak of his career in the missions commissioned by Annan, such as the operation in East Timor. Many even pointed to him as a possible successor to the secretary general because of his proven capacity and extensive experience.

“Annan was a giant at the United Nations,” the last great promoter of multilateralism, which has recently lost momentum, overtaken by the current wave of nationalism,” said Clóvis Brigagão, a political scientist who headed the Centre for the Study of the Americas at a university in Rio de Janeiro.

He was recognised as perhaps the last global head of state that the powers-that-be allowed the world and as a leader who promoted human rights as a priority and strengthened the mechanisms of peace, democratisation and development.

One of his triumphs was to achieve a consensus on the eight Millennium Development Goals (MDGs) that set 17 targets to reduce poverty, hunger, child and maternal mortality, among other scourges of humanity, from 2000 to 2015.

Expanded and renewed, 169 targets now make up the 17 Sustainable Development Goals (SDOs), the heirs to the MDGs, seeking to promote social, human, environmental and economic advances by 2030.

For his work, Annan was awarded the Nobel Peace Prize jointly with the U.N. in 2001.

But it was the tragedy in Iraq that marked his two terms at the General Secretariat, as the first career staffer to be promoted to the top post in the U.N.

During that crisis, in addition to Vieira he also had the support of another Brazilian diplomat, José Mauricio Bustani, in adopting a position against the invasion by the U.S.-led coalition that also included Great Britain, Australia and Poland.

Bustani had led the Organisation for the Prohibition of Chemical Weapons (OPCW) since it was created in 1997 to enforce the international convention that seeks to eradicate these weapons worldwide.

The pretext for the attack was the alleged existence of weapons of mass destruction, mainly chemical weapons, in the hands of the regime of Saddam Hussein.

In 2001, Bustani was negotiating Iraq’s accession to the OPCW, which would allow for inspections and would prove, according to him, the absence of such weapons in the country.

This was a challenge to the U.S. government, which exerted pressure that led to Bustani’s removal from the organisation in 2002. A year later, Iraq was bombed under a justification that was never proven, which reinforced Annan’s condemnation of the Iraq war, which he deemed “illegal”.

Bustani shared his experience in the article “Brazil and OPCW: Diplomacy and Defence of the Multilateral System Under Attack,” published in late 2002, and continued his career, as Brazil’s ambassador to Britain and France, before retiring in 2015.